“I was glad when they said unto me’ that the Choir from King’s College Chapel at Cambridge in England was coming to Melbourne town, and to Adelaide, Brisbane, Canberra, Perth and Sydney during the Australian winter 2014, although Hobart sadly seems to miss out?

The intimate programs of rich and beautiful music that the choir are to sing is indeed inspirational. The concerts will be presented by Musica Viva.

As the Choir from King’s College are a group of singers acclaimed and renowned throughout the world for their excellence in technique, vitality and artistry, they will be sure to sing their songs of praise as one voice to completely packed houses.

The selection of works for the program has been gleaned from the very best of compositions in sacred music, which is only to be expected because their regular ‘venue’ for presenting these works is the too divine.

It is the ‘Chapel’ at King’s College in the University, which is sited in the city of Cambridge, England.

It’s a stunning venue, one that we could never hope to entirely emulate here, although some of our architecturally powerful buildings would come close in terms of sound quality.

They include the Elizabeth Murdoch Recital Hall at the Melbourne Recital Centre, which has a stunning acoustic and will provide a sound for the choir they have not experienced before.

Their usual ‘Chapel’ home is an inspiring place and all about the architectural final phase of the English Gothic style. Called Perpendicular Gothic once established this style affected ecclesiastical and secular design for over 250 years.

Chapel music has been renowned at King’s College since it was founded in 1441, and since King Henry VI (1421-1471) envisaged a choir providing the music for the daily offices and celebrations of the Mass.

Henry was only 19 when he laid the first stone of the ‘College roial of Oure Lady and Seynt Nicholas’ in Cambridge on Passion (Palm) Sunday in Lent, which marks the beginning of Holy Week that concludes on Easter Sunday.

Characterized by the stress on straight verticals and horizontals, by slender vertically subdivided supports and large windows to let in the light, one of its major triumphs Kings College Chapel took over a century to build so the King did not live to see it completed.

The incredible vault of the chapel has been described as the place ‘where stone is robbed of its weight and density and suspended aloft, as if by magic’.

The fretted roof achieves the ‘airy security of a cobweb’ and it is indeed breathtaking, as are the voices of the men and boys of this acclaimed Choir from Cambridge. 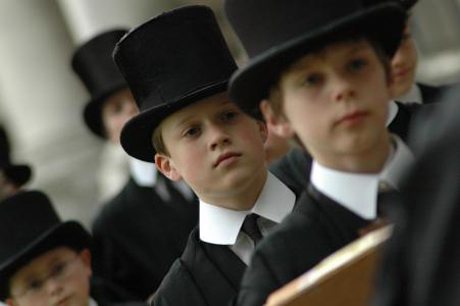 King Henry VI instructed that the choristers for his chapel were to be poor boys, of strong constitution and ‘honest conversation’, all under 12 years of age.

Today they sing Evensong daily during term time and the choir comprises sixteen boy choristers all of whom have scholarship’s to help pay for the education.

They are between the ages of nine and thirteen years, while fourteen additional male undergraduate students from Cambridge University are choral scholars and the organ scholars support the voices.

When the current Director of Music Stephen Cleobury arrived at King’s Chapel in 1982 he made a commitment to commissioning a new carol each year for inclusion in the College’s liturgies, and with the annual Festival of Nine Lessons and Carols an all-new tradition was born.

The Program being offered while the choir is in Australia includes works from early music forms through to contemporary Australian compositions.

They were especially commissioned from Peter Sculthorpe (b1929) The Birthday of thy King, Carl Vine’s Ring Out Wild Bells and Brett Dean’s Now Comes the Dawn.

Sculthorpe, who grew up in Tasmania, had a mother passionate about literature and a father who loved fishing and nature. Both of these influences are revealed in his work and his carol was composed for the choir in 1988.

In 2007 Brisbane born composer Brett Dean produced a new work, which uses a poem by Richard Watson Gilder. It was broadcast live on BBC Radio 4 on Christmas Eve that year.

His colleague Carl Vine’s composition was commissioned in 2012. It has been described as having ‘inventively encapsulated the core Christian principles of community, generosity and kindness’ and it was also very well received. Of the historical numbers, Palestrina’s Dum Complerentur is part of a beautiful mass he composed, one that is still at the heart of many Roman Catholic services sung around the world.

It’s glorious music for a great choir who are at the peak of choral excellence in the British tradition.

Other gems, like the glories of the medieval glass embedded into the windows of the chapel, which is priceless, include the works by English musical genius Henry Purcell (1659 – 1695).

His earliest surviving compositions date from 1680 his theatre music, in particular, made his name familiar to many who knew nothing of his church music or the songs he wrote for the court.

Indeed one of the most important musical developments in Restoration London was the gradual establishment of regular public concert.

His only true opera (i.e. with music throughout) was Dido and Aeneas. It was written for a girls’ school at Chelsea is among the finest of all 17th-century operas.

Purcell provided a number of verse anthems and full anthems for the liturgy of the Church of England, as well as settings of the Morning and Evening Service, the Magnificat and Nunc dimittis, the Te Deum and Jubilate.

Another of his popular works today Ye once ten hundred deities comes from one of his semi-opera’s, The Indian Queen composed in 1695. It was a spoken play featuring operatic scenes and interludes.

This wonderful piece of music took its text from Psalm 122 is associated with coronations. It is also sung at times when prayers for peace and national prosperity are being offered.

The work has a wonderful contemplative tone, which reflects a country at peace with itself and others.

The singing is off the scale, intentionally and optimistically. Henry Purcell endeavoured to scale new heights in his compositions so that those who loved the Lord would prosper.

His works in music are well loved all over the world today.

Italy’s renowned composer, gamba player and singer as well as Roman Catholic priest Claudio Monteverdi (1567-1643) was another trail blazer of his day.

He is regarded as being the ‘most important developer of the then new genre of his day, the opera. He also introduced a ‘modern secular spirit’ into church music and  slotted into a transitional period linking what we label as the Renaissance and Baroque eras of music.

Monteverdi composed vocal works that exemplified the great shifts in musical thinking, new styles of composition and singing styles happening at the time.

These occurred during the sixteenth, and first few decades of the seventeenth centuries. His music was all about inner peace.

Two programs are being sung by the choir during their visit, which provide an outline of the evolution of sacred English works from their Tudor beginnings through to the present day. I was glad when they said unto me: we will go into the house of the Lord.
Our feet shall stand in thy gates, O Jerusalem.
Jerusalem is built as a city that is at unity in itself,
For thither the tribes go up, ev’n the tribes of the Lord, to testify unto Israel, and to give thanks unto the name of the Lord.
For there is the seat of judgement: ev’n the seat of the house of David.
O pray for the peace of Jerusalem: they shall prosper that love thee.
Peace be within thy walls, and plenteousness within thy palaces.
For my brethren and companions’ sake I will wish thee prosperity.
Psalm 122: 1-8

The ancient Romans controlled the area around the Mediterranean for over six centuries celebrating their victories and expressing their politics and culture by holding great festivals, triumphal processions, fine oratory and stupendous spectacles. The first Roman Emperor Augustus, from all contemporary descriptions, preferred to live with his wife Livia and…