Emerging artist Greek-Cypriot Australian, soprano Christiana Aloneftis, a graduate from the Faculty of Music and VCA at The University of Melbourne will participate in a month-long program intensive in June 2014 studying at La Scala (Milan) a dream of many opera hopefuls.

Christiana will then remain a further six months in Europe studying the Bel-Canto vocal style and technique supported, in part, by The Italian Government Scholarship.

Christiana has a great love of the Bel-Canto repertoire and harbours a great interest in Russian Art Song and the promotion and performance of Greek Classical Art Song.

She said,  “When I was 15 years old I was fortunate to travel to Italy as a high-school student. Upon observing a Mozart’s Cosi Fan Tutte rehearsal at La Scala I realised that I had a burning need to be on stage and seek to move people in the way that I was moved on that day…”

Christiana will, on Thursday March 27 at 7.30pm together with associate artist concert pianist Konrad Olszewski, glorify ‘The Life and Love of the Woman’ in a unique recital to be held in a not-for-profit theatre and gallery fortyfivedownstairs on Flinders Lane, at Melbourne. 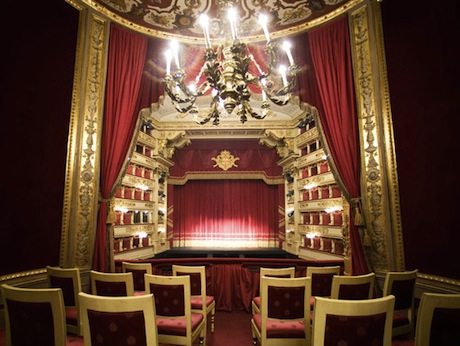 Christiana admits she has “always been intrigued by the innate emotional power women wield”.

She has devised the program so that it “artfully represents different facets of the female identity, whether that be the turmoil of a young heart, the joy of new life or the inevitable sadness of loss”.

With a multitude of awards behind her, winning The Dante Alighieri Society Overseas Career Scholarship in 2013 has given Christiana an opportunity to both perform and study in Greece, Cyprus, Germany and Italy.

She is emerging from the age of study into the age of performance, putting her art form into practice. It takes a lot of courage, commitment and caring to become a professional, polished and perceptive artist on the world stage today.

Christiana sounds as if she’s off to a good start. If you would like to support a talented emerging young operatic singer be sure to attend her recital The Life & Love of the Woman: Christiana Aloneftis at fortyfivedownstairs, Flinders Lane at Melboune on 27th March, 2014: BOOKINGS