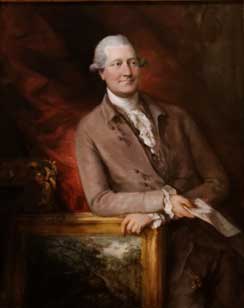 It was in 1762 that James Christie established himself, and successive members of his family, as an auctioneer in Pall Mall at London. By the time this portrait was painted in 1778 he had moved to commercial premises adjacent to the painter Thomas Gainsborough’s residence where this portrait was rendered A writer in the General Advertiser stated it ‘was, as indeed all his likenesses are, very striking’. Christie leans with the ease of a gentleman on the frame of a painting, apparently a landscape by Gainsborough. Since the artist found it hard to sell landscapes this could be interpreted as an attempt at modern marketing to promote Gainsborough’s work, rather deftly it must be said through the portrait of an auctioneer. It also could be construed that his landscapes were by association in the same league as the Old Masters that were regularly passing through Christie’s salerooms at the time.