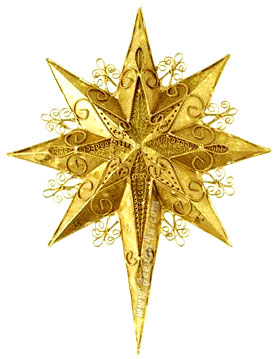 Now showing at Windsor Castle in England for Christmas is a Regency-themed display revealing how King George IV celebrated the festive season during the early 19th century. There will be decorated Nordmann Fir Christmas trees in the St George’s Hall and the Crimson Drawing Room.

Native to the mountains south and east of the Black Sea in Turkey, the Nordmann fir is a large and evergreen coniferous tree named for the Finnish Zoologist Alexander von Nordmann (1803-1866) who was director of the Botanical Gardens in Odessa in the Urkraine. The Nordmann fir (Abies nordmanniana,) is one of the most important species of trees grown on the European continent for Christmas, favoured because of its attractive foliage and needles that are not sharp and do not drop readily when the tree dries out.

In St George’s Hall, a 24-foot Nordmann Fir Christmas tree will be decked with gold decorations and over 20,000 twinkling lights while a richly decorated tree in the Crimson Drawing Room adds to the festive spectacle. The Octagon Dining Room will be decorated with a Yew tree (Taxus Baccata) a conifer native to western, central and southern Europe. There is a fabulous stand of Yews at the Royal Palace of Hampton Court dating from Tudor times and the Fortingall Yew in Scotland is known to be thousands of years old. This ancient tree is considered sacred, and grows well in England particularly in Churchyards, where it has sheltered its people for thousands of years. There is also a Yew tree still standing in a Welsh churchyard at Defynnog, which horticulturalists believe was a sapling during the Bronze Age, 5000 years ago. When you think it may have been already three thousand or more years old at the time of the first Christmas, it’s hard to comprehend. Known for its resilience and strength the Yew was used for fashioning longbows in ‘Robin Hood’s time and also woven for hedges. At Windsor its use will help to evoke a sense of how Queen Charlotte (the mother of George IV) would have decorated the Castle in her day for the festive season.Visitors will also see some of the finest works of art from the Royal Collection which furnish the State Apartments including the very fine portrait of the Duke of Wellington by Sir Thomas Lawrence 1815, ©Her Majesty Queen Elizabeth, The Royal Collection Trust. In a magnificent Chamber of Windsor Castle George the Prince Regent celebrated the Allied victory at the Battle of Waterloo and it has forever since been known as the Waterloo Chamber, where 16-metre long table will be laid for a festive feast with pieces from the spectacular Grand Service. A Regency Christmas at Windsor Castle –  Now showing until 5 January 2016 – Book Tickets

We have been alerted by ‘Larry’s Ghost’, roving night reporter for the Tasmanian Times – The nominations for the Helpmann Awards – Australia’s equivalent of the Olivier Awards – were announced last night and Hobart Baroque scored two nominations. L’isola disabitata ( TT: Take a bow, Leo) was nominated for…