The Melbourne city precinct, from Federation Square to Bourke Street Mall, has been transformed into a Christmas wonderland. From the precinct of St Paul’s Cathedral, where Christmas light projections reflect on the story of the original Christmas journey, to the Docklands packed with tourists from around the country and overseas, there is plenty of meeting and greeting, eating and drinking going on. Melbourne Council is getting behind the cities retailers with a really big push, to help people to start spending again. They have backed them up by bathing the city in decorations and by employing a team of young people wearing Santa hats, to hand out a Christmas Decorations Map. This is a guide to help you Take a Christmas Journey Across the City‘ stopping to buy your presents, and to frequent its famous café’s, restaurants and refreshment and bars along the way. Laneway leading off the Block Arcade

Chinatown and the Greek precinct have both had recent makeovers, and the Melbourne street ‘café’ society certainly looks very attractive in these few weeks leading up to Christmas. Melbourne city is really quite unique in Australia, with its maze of tiny lane ways and ‘little’ streets all crammed on both sides with specialist shops and outdoor café’s. In many parts of the city these really make you feel as if you are in Europe, with overhanging striped awnings, beautifully detailed wrought iron and glass canopies and domes, as well as lots of classical architecture. They are a distinct contrast to the lanes and alleys covered in graffiti.

The very stylish place to walk through, or to eat in is the nineteenth century Block Arcade, an icon of the city on Collins and Elizabeth streets.  A visiting friend and I were lunching at the Caffé Duomo, one of my favourite spots to eat in the town, when suddenly a quartet flash mob appeared, and started singing Christmas carols. Their voices resonated beautifully off the superb acoustics of this fine classical architectural space, whose original design was based on ancient harmonies of scale and proportion. It was truly delightful, a special moment.

Originally modeled on the Galleria Vittoria at Milan the ‘Block’ Arcade has been open since 1893. Some of its features are fabulous. Giant skylights hover over two wings, and there is a very large number of stained glass windows as well as a truly marvelous mosaic floor, which has been classified by the National Trust. When it opened in 1892, the Block Arcade boasted fifteen milliners, three lace shops, a photographer and the Hopetoun Tea Rooms, which is the only business still running today from that time. Named for its founder Lady Hopetoun when taking tea was one of the most refreshing things you could do, the Tea Rooms combine old world charm with the heritage of fine quality food amidst tranquil beauty.

It is the sort of place where ladies once wore hats and gloves and gentlemen would tip their hats at the passing parade before they entered. They all most likely indulged in asparagus rolls and open sandwiches, which are still on the menu today. Hopetoun Tea Rooms is very ‘chic’.

Outside there is well ordered queue at Christmas, which is controlled by a maître d with golden bollards that are linked together by stylish maroon cord with tassels keeping everyone in line. Reservations are required in December.

The array of cakes and pastires in the window is certainly enticing, and the daringly decorated space inside is filled with happy people, all of whom are enjoying catching up with old friends and family judging by the smiles on all the faces. Founded in 1994, The Caffé Duomo is an Italian family run business, with classic Italian cuisine made with fresh local ingredients. The coffee is great and the wine list small but well chosen. The position on a corner of one of the wings of the Block Arcade, that lead into a laneway, is great for people watching.

The blackboard specials are always enticing.  My friend enjoyed her seafood pasta with a Pinot Grigio while my char grilled calamari with rocket and yoghurt dressing went down exceedingly well with a glass of ‘classico’ Chianti, which was truly delicious.

Did I mention that the coffee at the Caffé Duomo is really excellent?

If you are looking to take a weight off your feet fhe City Circle tram has been turned into a Sleigh during December. It vies for the tourist trade with the many horses and carriage rides that mix it up with the cars and bikes in the city centre. The whole scene is one of ordered chaos. 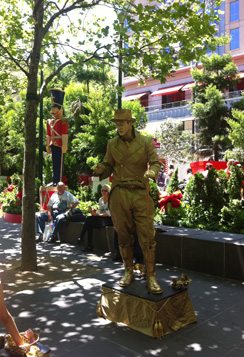 Melbourne Town Hall has been gift wrapped and decked out with wreaths and giant Toy soldiers (not sure why) and City Square has been renamed ‘Christmas Square’ for the month of December. It also contains the giant soldiers, standing on big drums under a canopy of plane trees.  The square itself has been transformed into a magical Christmas forest, with fir trees in giant containers tied up with giant red bows.

A wonderful mime in a gold suit and hat and gold painted face entertains the passers by. He’s lucky to be under the trees, anywhere else he would be melting. Santa is hiding out on the edge of the forest inside a canvas Cave. How he is surviving wearing a fur-trimmed suit in the pre Christmas Melbourne heat wave is anyone’s guess. 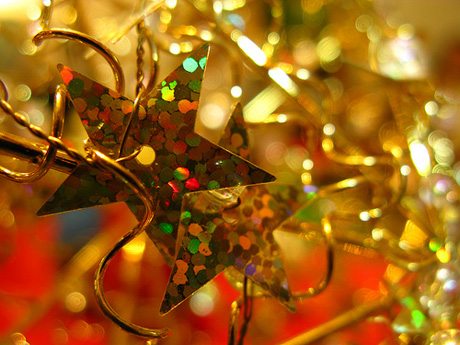 In the city there is the Myer Christmas windows to see, which are now a Melbourne tradition having enchanted thousands and thousands of children in the 56 years since they were first installed.

Bourke Street Mall is a river of stars and lights, while Collins Street retains its elegance. At Christmas Square, people are gathering around the Nativity Scene, a recreation of the birth of Jesus the Christ 2000+ years ago when these celebrations first began.

Magic Melbourne, made more so at Christmas. Come and take a ‘Christmas Journey’ and celebrate in style.