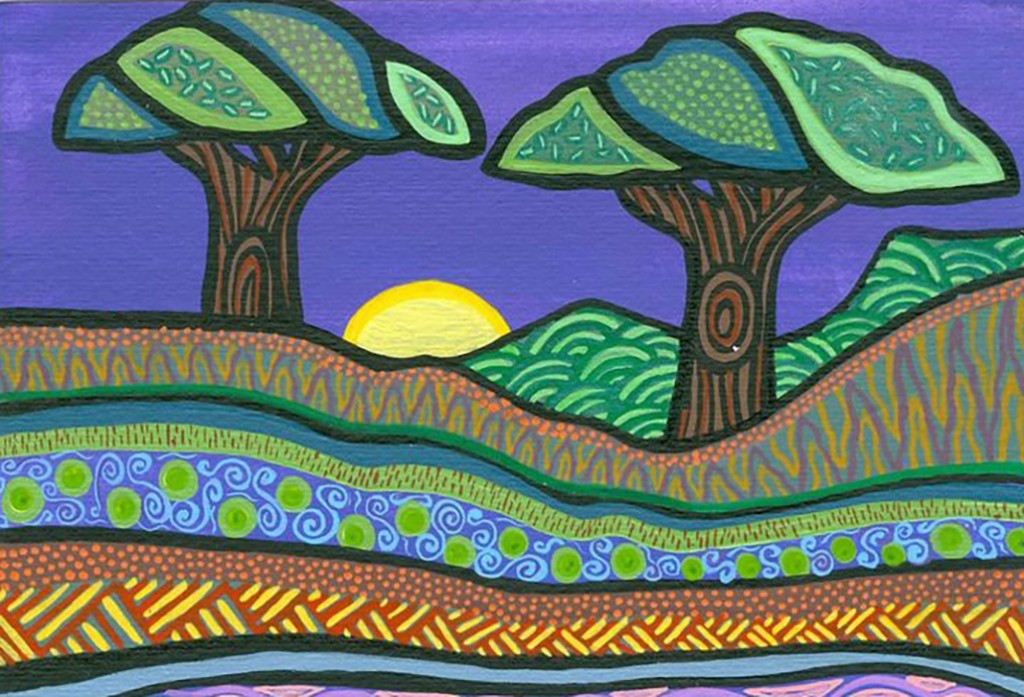 Recently it was discovered that Aboriginal culture is 18,000 years older than originally believed. Indigenous Australians remain the world’s oldest living culture. They have honoured storytelling for centuries.

It is vital that Australian children have the opportunity to share in traditional and contemporary Aboriginal stories and perspectives. Children will make discoveries develop appreciation and change perceptions through exploring the inventive and engaging picture books written by Indigenous Australians about their culture. 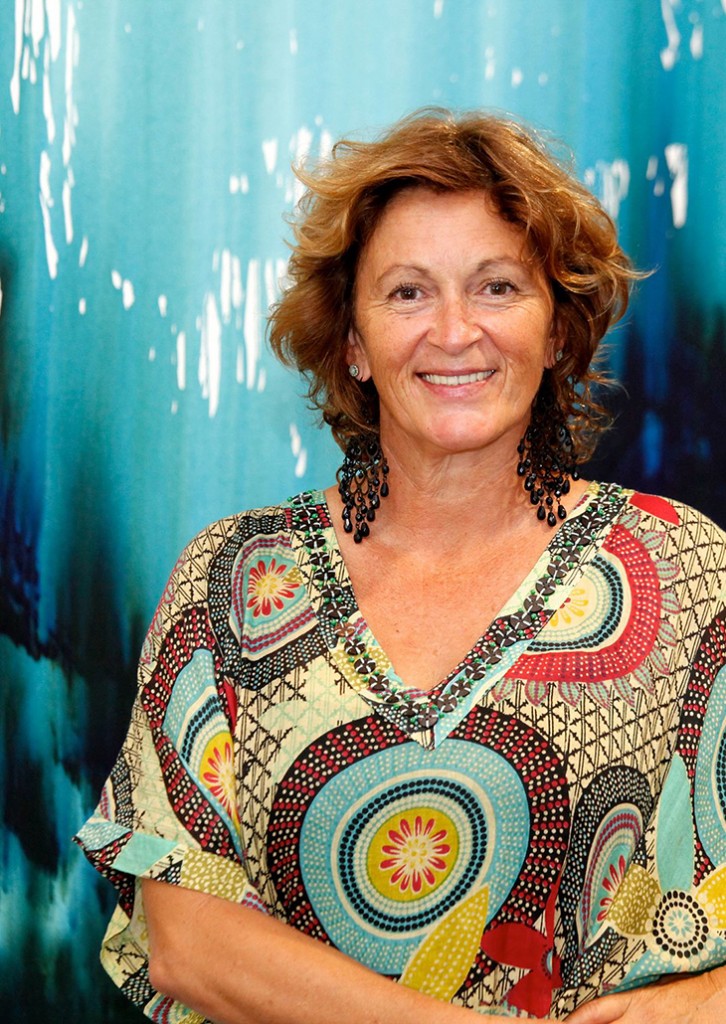 One of the best loved Aboriginal writer and illustrators of children’s books is Bronwyn Bancroft. In 1989 I was fortunate to be given the book, Aboriginality Contemporary Paintings and Prints.

This was my first exciting glimpse of Bronwyn Bancroft’s artworks. She was profiled by Jennifer Isaacs along with twenty four other Aboriginal artists from all over Australia.

Bancroft articulates with clarity that “painting gives me great freedom. It enables me to express myself and my dreams. My work springs from deep within me, from my Koori ancestry. It is not necessarily a conscious expression of myself but more often than not an unconscious outpouring of my dreams. I hope to create a world of happiness, love and vitality and to give Aboriginal people reasons for optimism in an often pessimistic world.” 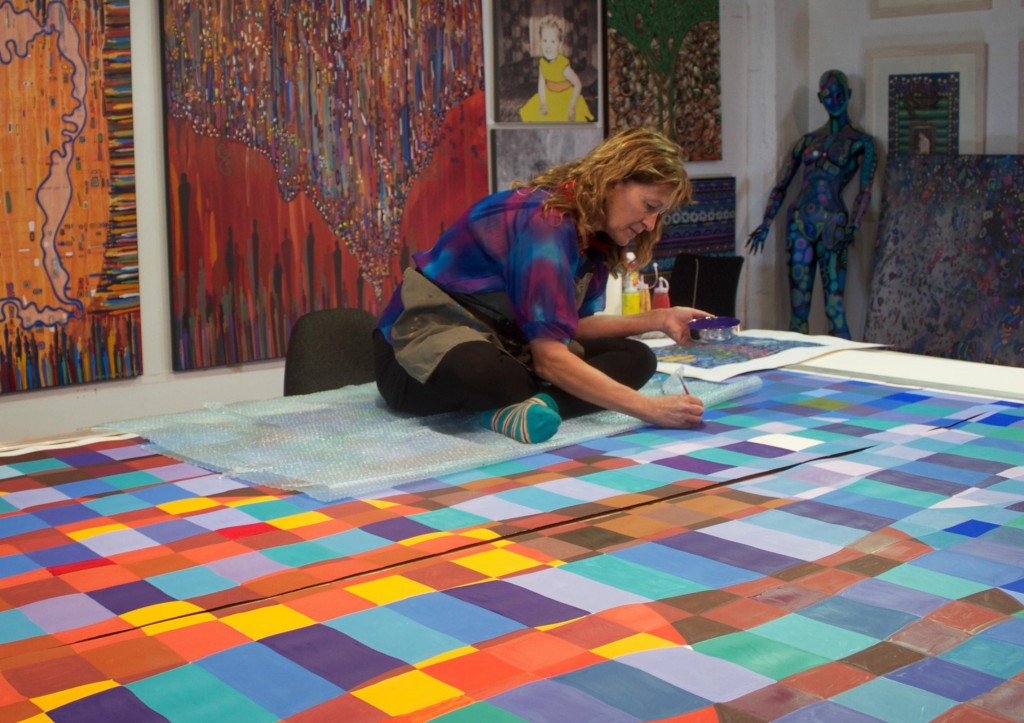 Her artworks are in many major art collections across Australia and elsewhere including the National Gallery of Australia, the Art Gallery of New South Wales and the New York Public ‘Library Print Collection.’

She began illustrating children’s books in 1993, with artwork for Diana Kidds’ The Fat and Juicy Place which was shortlisted for the Children’s Book Council of Australia’s Book of the Year Awards and won the Australian Multicultural Children’s Book Award in 1993.

She has continued a history of collaborating with other authors. Leaving written by Katrina Germein is one example of Bancroft illustrating another author’s texts. It celebrates saying goodbye, focusing on the ritual and generosity of parting. 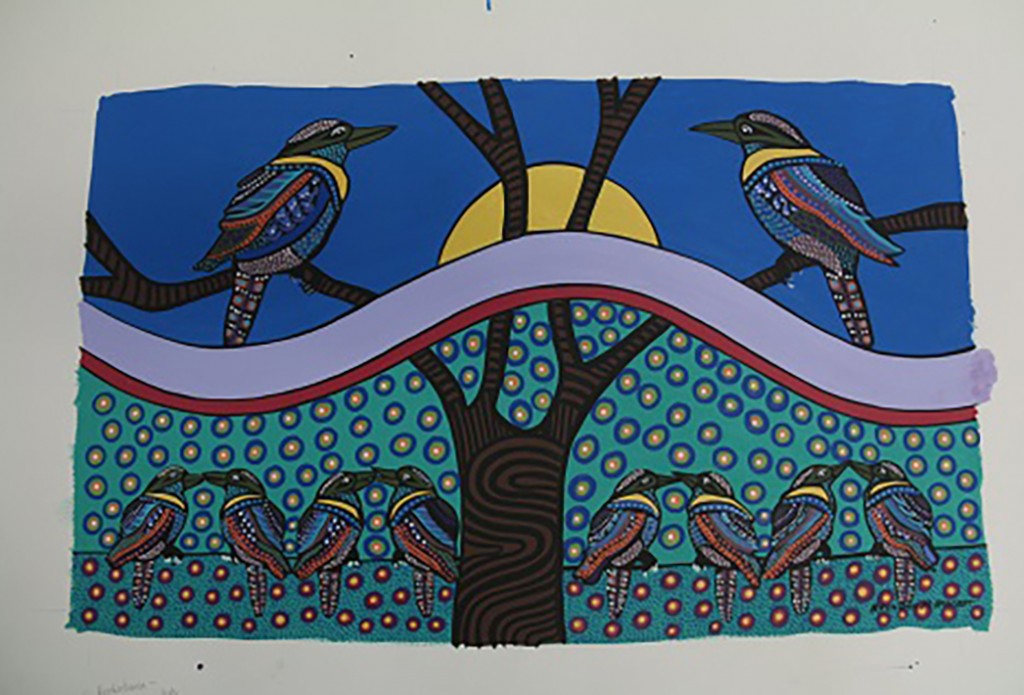 The significance of farewell gifts, the affection and thought embedded in them is lovingly expressed through the words and pictures. The emotion is described with a touching simplicity that is beautifully connected with the poignant illustrations.

Australia is central to the themes that permeate her inspiring books. In Why I Love Australia first published in 2010 Bancroft takes the reader on a discovery tour of the landscape from rivers across the country to the coral reef. Aboriginal reverence and respect is signified in the repetition of the smoking ceremony woven throughout the text. 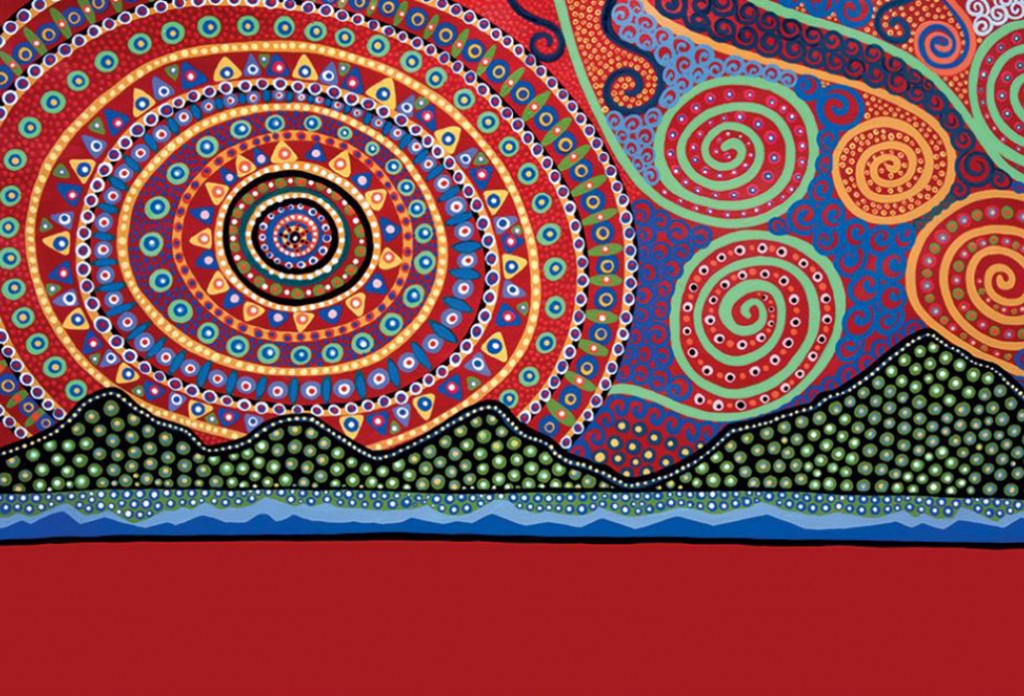 Colours of Australia, was printed in 2016 and the poetry of her words and the compelling vibrancy of her pictures charge children’s imagination and challenge their senses. She is a skilful pattern maker imbuing her designs with the essence of the country she loves. 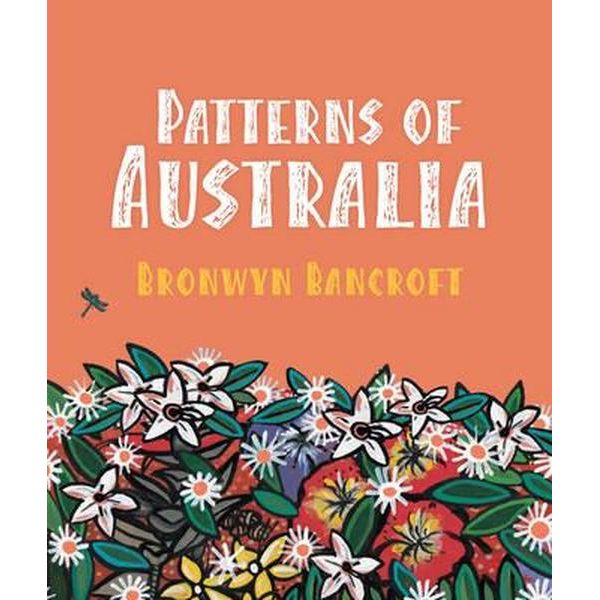 My very favourite Bancroft picture book is Patterns of Australia first published in 2005. Her clearly recognizable style is evident. She creates rich layers of meaning in the diverse Australian landscapes that resonate with symbols and hidden significance.

Her book invites the reader to examine the detail within the illustrations and begin to develop a deeper connection with both the lyrical text and the author’s intent.

Both text and illustrations abound with poetic descriptions, the visual image of the clouds ‘moving together, shifting, changing’ evokes imaginative responses. ‘What can you hear, rustling among the leaves?’ incites speculation. You can feel the ‘sand particles blown by the wind’ and taste the ‘flickering heat.’ The fragrance of the rainforest’s canopy is mingled with its ‘damp’ floor. 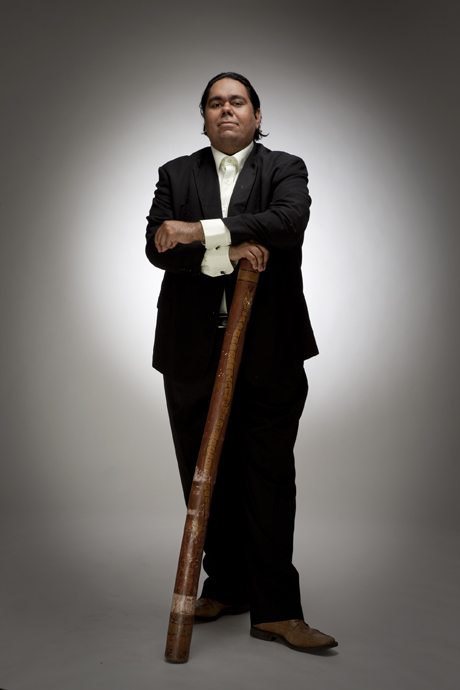 I believe this book is an opportunity to introduce children to the music of Australian composer Peter Sculthorpe, ‘an unequivocal musical identity.’ The arrangement of Songs of Sea and Sky made especially for William Barton and The Queensland Orchestra is inspired by the flights of birds and the changes in sea and sky.

Sculthorpe’s response to the Australian landscape and deep engagement with Aboriginal culture is expressed in the orchestral textures of the music and the virtuosic skill of the didgeridoo performance by William Barton who is recognised as one of Australia’s finest traditional didgeridoo players.

Very young children love to match words and pictures as they begin to acquire an understanding of the connection between spoken and written language, and the skills linked with reading. Bancroft’s Possum And Wattle My Big Book of Australian Words, is a motivating introduction to the joy associated with early learning and word recognition. 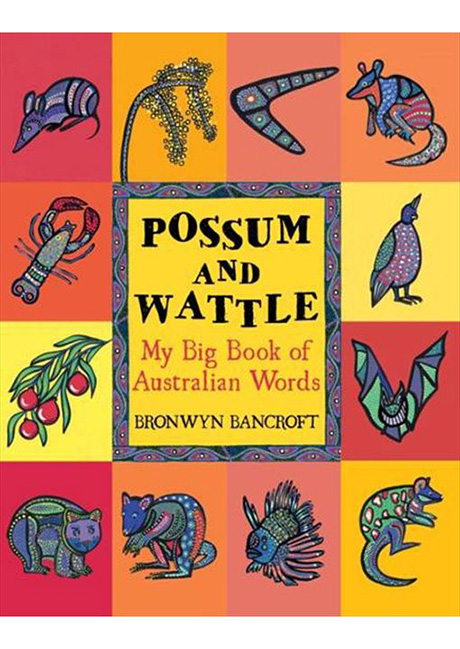 Again she explores Australia’s splendid and remarkable landscape capturing the curious and inquiring minds of children, revealing to them over one hundred stimulating words and illustrations.

A glossary of terms provides fascinating information for the older readers, parents and caregivers to share. Sally Morgan, also a renowned author and artist provides valuable knowledge about Aboriginal and Torres Strait languages in the introduction to the book.  Consequently this book is suitable for children aged from three to eight.

The rich language of her words and compelling visual images communicate a sense of awe and wonder. Children engage with the colours, words and patterns and will want to create their own examples. 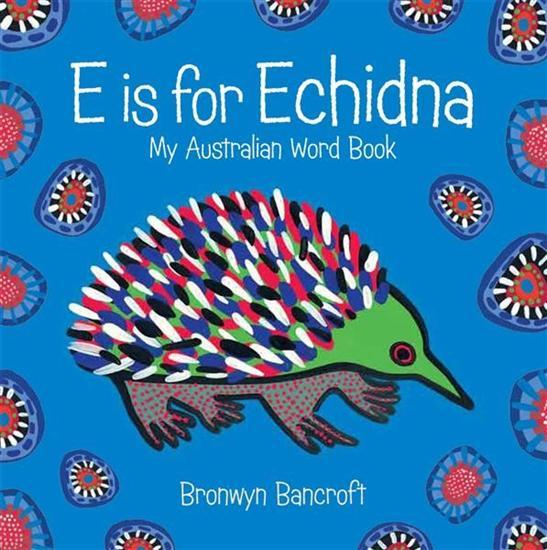 An Australia ABC of Animals is captivatingly illustrated by Bancroft, who is astutely aware of the topics and themes that children are interested in. Like all her books she offers children a window to the visual elements of colour shape and line, whilst teaching children about the world around them.

“The paintings in this book are a personal journey inside myself, an exploration in line and colour. My artwork is not traditional, but when you are an Aboriginal artist, you’re not ‘just’ an artist – you’re a teacher, a facilitator. Although I live and work in the city now, I know that my artistic talent descends from my Old People – they have gifted it to me – and I feel honoured by that.”

Today she has illustrated more than twenty children’s books. Bronwyn Bancroft’s love of country ripples through her priceless texts and exquisitely distinctive illustrations. 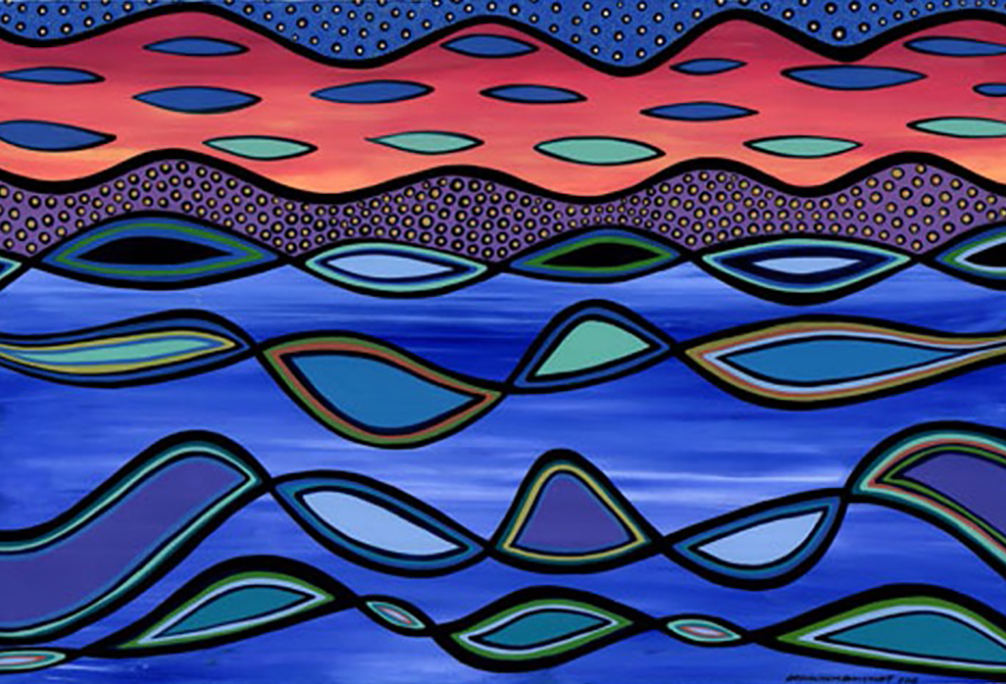 Any child receiving one of her books at Christmas will be enriched by her interpretation and response to Aboriginal culture and Australia’s unique beauty.

Wishing you all peace and love this Christmas!