This was my first Cirque du Soleil experience and from reading reviews, along with friends and family’s praise from previous experiences, I had high expectations of something great! 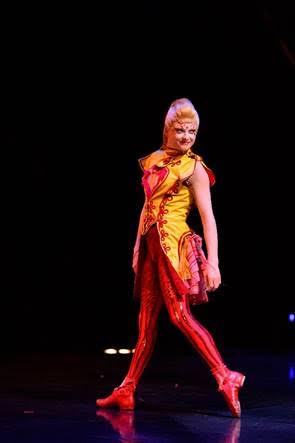 It was opening night here in Brisbane, so with a date in tow and dressed to impress, I was also hoping for something equally remarkable.

To say ‘great’ or ‘remarkable’ is an understatement. WOW!

It was outstanding and exceptional in so many ways.

My smile drifted to jaw dropping, with the thrills and excitement of an amazing group of acrobats, contortionists, elaborate stage design, costumes and the sensational music+ the amazing vocals by Jennlee Shallow.

The giant yellow and blue Big Top is located in Brisbane nearby to DFO or, as you are heading to the airport.

Taking the turn off to DFO, there was a sea of cars heading to see the show and I thought we had plenty of time to spare, with forty five minutes to go until the show started.

The queue of cars to get to the parking was extremely slow going and at times a standstill. I always look on the bright side, so it gave my date and I plenty of opportunity to get to know each other better. However with the tent nowhere in sight and only fifteen minutes to go until starting time, we started to get a little concerned what the hold up was.

In the end, there was 2 people stopping cars to see their tickets… now I am no rocket scientist, but the need to stop cars to a venue that no one else would be going to park was crazy! They checked your tickets as you walked in and then again when you were ushered to your seat.

We made it just in time and the clowns giving the pre-show entertainment, aptly called it Cirque du So Late!

It took us a little to settle down after the mad dash from the car park to our seats, but as soon as the lights went down, the music began and the first act appeared, we were in awe. Personally, I don’t read reviews prior to seeing a show, concert or movie, as I want it to be a surprise experience. All I need is a quick Google search to see if it is rated well.

Looking at Google tonight, Kooza is rated 4.8-5 (1949 votes) via Facebook and rightly so, it was awesome!

Without spoiling your surprise by giving you a run through of each act, the first half of the show is a mix of contortionists bending their bodies in ways that I didn’t know was possible, spinning hoops around a body to die for, the high-wire from hell (not one, but two high-wire’s above another), a unicyclist that must have been riding that thing from birth and the most scariest of all…

… getting volunteers from the audience! The storyline is about an innocent, naïve but charming clown striving to find his place in the world.

All the action is set among some of the best live music acts that I have ever heard. I can only describe it as a mix of soul, jazz, funk with vocals almost outperforming the circus acts.

A big call you say? Yes it is. But if you can imagine some of the most incredible circus acts ever, then imagine how good the band is!

Costume designs are like something out of Pirates of the Caribbean (Davy Jones) with vibrant colours that looked like a one-piece outfit extending from their feet through to the squid like ‘hair’.

I had to ask my date to pinch me that I wasn’t dreaming and lucky for me, she obliged! The brilliant design of the tent was that it catered for various (3) bar areas. So instead of the norm, rush to queue up to get a drink, lose the people you are with as they disappear to queue for the loo and then when you eventually find each other again to skol your drinks.

This design allowed an orderly, small queue crowd and not a crush of punters wanting a drink. The other fantastic thing was that popcorn was complimentary. There was an additional bar offering free sparkling wine, white or red and a stand that had thick, heart shape, chocolate brownies that were so good, I had to run back to get another, before the second act.

I have a feeling the free popcorn, drinks and brownies were only for the opening night. Take your wallet, just in case. The second half was just as good as the first, with a gigantic spinning wheels with a huge man in each wheel running around (like a mouse in a spinning wheel), acrobats being catapulted in the air and performing quintuple twists-flips (one with stilts on), a woman flying around the stage in a hoop and a guy stacking chairs on top of each other continually and balancing from them (I was glad when he attached the safety rope, after about the tenth chair).

Post show the performers were out near the bar areas for smart phone pics with guests.

Again the tent design allowed this to be not a push and shove, but instead a civil line up to grab a snapshot.

To sum the show up with one word… GO!