The enthusiasm curator Ellen Porter and co-curators Janet Buick and Simone Sharpe have for the beautifully realized intimate exhibition ‘Threads of HIstory – Dressing Stonnington Through Time‘ that they have mounted from infancy to old age is infectious. On display in the Pop Gallery of Northbrook, one of the heritage mansions in the City of Stonnington in Melbourne, it is apparent from the moment you step in the door of the long hallway leading to what was the old ballroom.

The erudite exhibition catalogue is packed with information; the people and the times. From the velvet luxury of a carriage rug, to the fine art of tailoring a suit, to the rise of the Emporiums from Chapel Street to Chadstone, and the retail and manufacturing of clothing, there is a mine of information to both absorb and admire. Entry is FREE and refreshments available. Situated behind the Malvern Library and an aspect of the [Untitled] Literacy festival now running in all the libraries of the City of Stonnington, the exhibition has a lot to see and enjoy for lovers of historic costume.

It includes as a highlight and centrepiece, a tribute to pre-European times, a glorious Possum Skin Cloak.

It is in the fine tradition of a robe of honour, a garment that emerged in many cultures around the world from antiquity.

The cloak is an integral aspect of indigenous aboriginal culture. Following death, people were ‘wrapped in their Country’ to be buried.

It was made in 2014 by multi disciplinary artist Maree Clarke a Mutti Mutti, Yorta Yorta, BoonWurrung woman from Mildura in northwest Victoria, who is now living and working in Melbourne, exploring the rituals and ceremonies of her ancestors.

The cloak is part of the growing collection stored in the ever-expanding history archive of the City of Stonnington, currently located at Northbrook. The municipality encompasses the suburbs of Armadale, Kooyong, Malvern, Malvern East, Toorak, Prahran and Windsor, and parts of Glen Iris and South Yarra and its easy to see that out there in the future, it will be shown in a museum of its own. Fashion Drawing by Victoria Cascajo for a frock for her boutique Balencia, on display, Threads of History exhibition, Pop Up Gallery, Northbrook, photo: Carolyn McDowall

Mounted and stepping up the left hand wall as you enter the exhibition, is a collection of Haute Couture, or ‘high fashion’ drawings, superbly rendered by Victoria Cascajo.

A colourful collection, they are captivating.

Victoria was the proprietor of Balencia, a gorgeous fashion boutique in South Yarra and later in Toorak, where from the 60’s until she retired, she employed some 68 dressmakers and contributed to the growth of Australia’s fashion industry.

What a superb array, climaxing with two of the stunning garments she made for ladies in society.

They capture the ‘Threads of History’, in sensational style. You can ‘wander at leisure through the work of the seamstress, the tailor, the fashion designer and discover the clothing made and worn in Stonnington since the 1850’s.

Victoria is mainly known for designing just one gown that would give her world-wide fame, the sensational thigh splitting cream bejewelled gown that Prime Minister William McMahon’s wife Sonia wore when attending a state dinner hosted by President Richard Nixon at The White House.

I remember waking up on that very morning seeing her picture in ‘that dress’ splashed all over the Sydney papers of the time, garnering everyone’s attention. 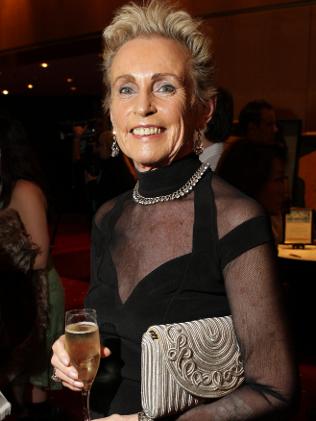 It was 1971 and while it was considered vary daring indeed, it was at the height of true elegance, simplicity and luxury all in one.

The interesting fact that turned up about the dress was that her husband had chosen and ordered for her sight unseen and so for her it was all about trust. For the women’s liberation supporters however, it was a blow.

In a period when it was not considered in Australia a man should perform such a service for his wife, it certainly gave him a personal boost in the voting polls.

Many admired their leader for his seeming married state of bliss, which was considered by many as just about ‘perfect’ as you could get.

Sonia and Bill were bold fashionable leaders of their time in sync with each  other, setting a standard of refinement. Civic regalia also part of the display at Northbrook has its roots in medieval times in England, the robe of honour in this case worn by Councillor John Romanis, when he was Town Clerk of the City of Prahran, which together with the city of Malvern was incorporated into City of Stonnington when it was formed on 22 June 1994, the first meeting of Council on 19 March 1996. There is a great Cupboard of Curiosities, which has been put together by vintage fashion collector Kate Coomber, which is sure to garner attention. The exhibition charts the rise of the Emporiums all along Chapel Street, South Yarra, where I first discovered fashion was more than a frock back in the 70’s. This was when Chadstone opened too in 1960 and became the largest drive in and park shopping mall in Australia, giving Melbourne the title of being our ‘fashion capital’.

At that time Melbourne’s style icon Prue Acton, was across all aspects of fashion from frocks to jewellery to cosmetics, the first female Australian designer to show in New York in 1967, she won all the awards available and I loved her ‘frocks’ passionately.

Like all Australian women at the time, I was distressed when she retired early in the late 80’s. The renowned English model Jean Shrimpton was invited to the Melbourne Cup in 1965 and shocked the Melbourne establishment and the local fashion police to their core by wearing her very tasteful garments cut an inch or two ‘above the knees’… ooh la la!

Then there were the original Aussie designers Linda Jackson and Jenny Kee who helped develop a distinctly Australian approach to fashion design during the 70’s.

They also contributed to the rapid growth of our economy drawing inspiration from colour theory, art history, theatre, Chinese opera, Buddhism and European haute couture, as well as grow an appreciation for the dress and textiles of other cultural and indigenous groups. The reaction to their extreme world-wide view meant that men endeavoured to assert their animal magnetism and their right to continue to rule their women with a rod of iron. Although they didn’t know it, they were fighting a losing battle.

The male flared pants controlled seventies became a short lived fashion, as fashion dissolved into the power packed shoulder padded eighty’s when women en masse, urged on by Australian born writer and one of the major voices of the feminist movement Germaine Greer, began to roar big time. Today it has become impossible for us to make a distinction between the fashionable styles that will last, the new trends that will grow and the passing fancies of a season. They seem to evolve on a whim, a smile and a passionate response to a novel, film, experience or motivated by technology.

Costume is and always has been, a footnote to culture as it reacts to our attitudes, philosophies, fashions and passions. In the meantime it is just best to enjoy the glory of it all!

After all it is inspirational and motivates us all to do better.

If you are a City of Stonnington in Melbourne resident or visitor, pop along to the pop up gallery at Northbrook in the old ballroom soon to enjoy a stylish conversation about community social and cultural life. On November 23, at 10:30 am as part of the exhibition, Carolyn McDowall will be giving a talk entitled Costume: Candlelight to Haute Couture on the evolution of fashionable and societal concerns reflected in costume, including jewellery, from 1800 to today.

Coffee culture is everywhere, from the smallest township of the Southern Highlands of NSW to the largest city we have. Australia has become in the past decade one of the ‘leading coffee drinking nations in the world’. With perfect timing Queensland’s Coffee Baron Dean Merlo and his team have unveiled…