Does good ever triumph over evil or does that only happen in books?

Goodness was strictly rationed in Second World War Berlin, evil, always available in the greyness of the bombed city’s unlit buildings, streets and laneways, was a house specialty at Gestapo Headquarters.

Author David R. Gilham uses war torn Berlin as a backdrop for his debut thriller, City Of Women. It’s 1943 and with all able bodied men at the front, the women of Berlin’s daily routines are taken up with queuing for ever decreasing amounts of fresh food, milk and fuel. They live in an environment of fear as the British bombing raids become more frequent, the sky lit by flames from burning buildings, the civilian death toll rises. Ten thousand Jewish people are working in Berlin factories, saved from extermination in concentration camps by laboring to meet the requirements of the German war machine.

The Nazi Party propaganda that Germany is winning the war no longer believed by anyone; Jewish factory workers and their families are blamed for the reversal of Germany’s military prospects.

Patently ridiculous (nobody ever said Nazis were smart just evil) as the starving Jew’s labour is important to the war effort, they are rounded up and transported to concentration camps.

Sigrid Schroeder, the novel’s main character, is a hausfrau whose husband, Kaspar, is fighting on the Eastern front. Sigrid is a good German. She lives with her mother-in-law, a Nazi Party member, who does her best to make Sigrid’s life a misery. The two women bicker constantly, Sigrid’s only escape, the nearby picture theatre.

Seated night after night in the back row she meets Egon and is beguiled by his charming passionate nature. They start an affair and Egon reveals a shocking secret – he is Jewish. Egon tells Sigrid about his wife and daughters and his hope to escape Germany.

If the lovers are discovered they will be executed. Sigrid, sex with husband Kaspar almost non-existent, for the first time in her life is in love, she will risk any fate to be with Egon. 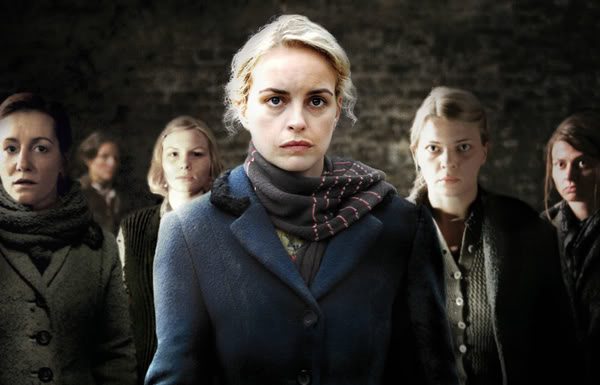 One evening while waiting for Egon, Sigrid is asked by a young girl, Erica, who works as a home help in her apartment block for help; she is being followed by the police.

Erica is a member of a Jewish escape network and little by little Sigrid is drawn into a dangerous shadowy world where Jews are hidden until papers can be forged to provide them with a safe travel route to Switzerland.

Egon disappears and Sigrid becomes increasingly involved in the escape network; risking everything to help a Jewish woman and her two daughters, she is determined they will find sanctuary in Switzerland.

Sigrid, a complex character, at times selfish and self-serving is no saint, she starts an affair with a German Intelligence Officer who lives in her apartment block.

Egon re-appears and they resume their affair, but who is he really and what has he had to do to survive the Gestapo’s murderous attention? Everyone has secrets, there’s no black or white, only a grey that dependent on your point of view could be right or could be wrong. David Gillham poses the question at the end of The City Of Women: What would you have done?

Would you have been a ‘good German’ or would you, like Sigrid, have risked torture and death to help Jewish people? Nazis, a party of thugs, sadistic murderers and professional thieves; their doctrine of Aryan Principles a sham to cover the systematic theft of Jews and dissident’s money and property, I hope I would have had the courage to help. I held my breath reading the last chapters, seriously thrilling. I really wanted a good outcome for Sigrid and Erica.

The setting and characters in The City Of Women, wonderfully well-crafted – wartime thoroughfares of Berlin under the watchful eyes of the Gestapo, terrifying to the hunted tragic Jews and anyone else who raises a hand in protest, are described in chilling detail.

I did find that a little too much was made of Sigrid and Egon’s sexual encounters. Love and sex is grand but not so much if it’s repetitious.

This is my only quibble with a thriller that was suspenseful, vividly exciting and at times, desperately sad. David Gillham, a good writer who is going to be great – City of Women is an immensely satisfying read.

About the Author of City of Women

David R. Gillham’s writing reflects his lifelong love of history.  “My connection to history has always been palpable, especially to certain times and places.  When I write about a place like Berlin in the 1940?s, I feel like I am walking around its streets.  I feel at home there, at least in my head.  I think I’m especially drawn to dark periods of the past, when people were forced to make choices about whether or not they would live their lives in fear.  And in particular, I write about women in the past.  We have all read about how men go to war, for instance, but what about the experience of women?  What wars have they fought on a daily basis?  That is what lead me to begin City of Women with the character of Sigrid – an ordinary woman forced to make an extraordinary choice – and then not only live with the dangerous consequences, but also rise above them.”
Early in his career, he was trained as a screen writer at University of Southern California, and then moved irrevocably into fiction.  After relocating to New York City, he spent over a decade in the book business, and now lives with his family in Western Massachusetts.

City of Women is available on www.bookoffers.com.au