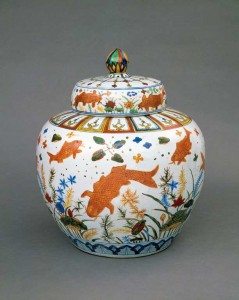 For centuries the Chinese traded with Asian islands and the trade spread to the Near East. Today the greatest collections of pre 1620 Chinese porcelains are in Eastern collections, particularly at Istanbul. During the Ming period 1368 – 1644 an entrepreneurial business class grew up in China and by the seventeenth century the Dutch East India Company shipped more porcelain to Europe than any other nation. By the turn of the eighteenth century officials were realizing the monetary potential of Europe’s interest. The English negotiated successfully and the East India Company surpassed others plying the trade by sea. Taxes, tributes, bribes and deceptions were rife. Storms, pirates, disease and rival traders a constant threat during the two-year round trip voyage. Private trade was commissioned or bought for speculative purchase. Porcelain became the most desirable shipment packed into containers cushioned with rice or other marketable goods and used in the bottom of ships for ballast.

The Met Gala Ball in New York is THE invitation of the year. It is always the prelude to The Metropolitan Museum of Art New York’s major costume exhibition. This year it is China: Through the Looking Glass exploring the impact of the western trade with China down through the…