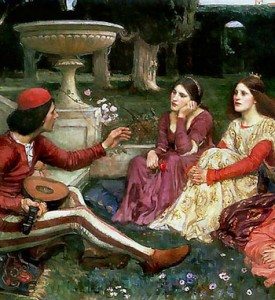 The word classic means of the first class, of acknowledged excellence; the word classical pertains to the standard achieved by ancient Greek and Latin authors or their works, or the culture, art, architecture of Greek and Roman antiquity generally. The main characteristics are clarity of outline or formal design; restrained, harmonious and in accordance with established forms. The rebirth of the individual in Europe (4 – 14th centuries) created a dawning of consciousness of the relationship of the individual to the natural world around him. Nature became the embodiment of truth. The so-called three crowns of Florence Dante Alighieri (1265-1321) The Divine Comedy – Inferno-Purgatorio-Paradiso Francesco Petrarca ( Petrach) (1304-1374) Epic poem Africa and Giovanni Boccacio (1313-1375) The Decameron all became very influential. Petrach translated ancient texts, re-assessing their writings. The strong social contact people had with one another helped the transmission of humanist ideas.

21st-century readers can immerse themselves in Thomas Jefferson’s mind and in the American dream in his library, within the Library of Congress at Washington DC