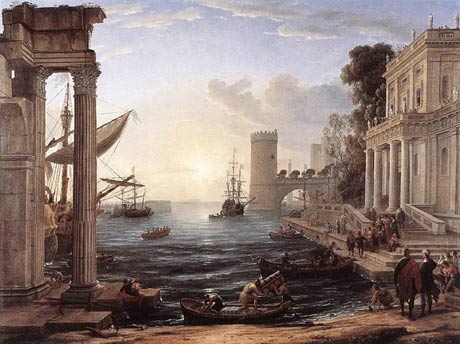 During the late seventeenth century French painter Claude Gelée known as Lorrain (1600-1682) who spent most of his life in Italy, had enormous influence far beyond his lifetime.

He blended architecture and nature together in a pictorial effect with his delicious paintings of hills and valleys, softly shaped curvaceous cumulus clouds, splendid rendering of trees blowing gently in a soft breeze and buildings or groups of buildings from a classical ancestry. The brush of a landscape artist such as Claude Lorrain arouses that inexplicable something that a traveller far from home feels, a deeply felt emotion one that is not easily defined, but neverthless when viewed awakens distant memories of happy days, sorrows and joys that have gone by, never to return.

They were a true vision of Arcadia that pleasant land idealized by the ancient Greeks where gods and goddesses, shepherds and shepherdesses frolicked about without a care in the world wrapped in the soft gentle haze of the early morning sunlight or cloaked in the misty magical mood of moonlight, as they sought a moment of perfection. 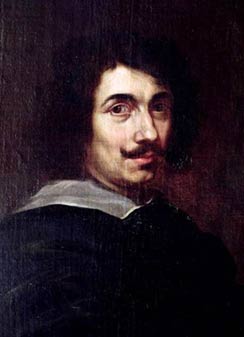 Claude presented nature and antiquity as more beautiful than it was and the countryside around Rome inspired his poetic rendering of light. When, as his work evolved, he turned to also painting seascapes the sun, just barely visible above the horizon, suddenly illuminated a whole picture for the first time in the history of art.

The way he took light and manipulated it so that he achieved a subtle atmospheric perspective and created recession in depth was revolutionary. His figures, were always represented in classical or in some cases, biblical costume. Sometimes as shepherds or sometimes as important and symbolic subjects from mythology. Palladian Bridge at Prior Park in Somerset, designed by the poet Alexander Pope and landscape gadener Capability Brown

As he progressed he toned down his use of colour so that his views became cool and silvery, more solemn and mysterious, radiating light with great enchantment.

His trees, waterfalls, riverbanks and ruins were bathed in sunlight and his winding rivers conducted the eye on a wanton kind of chase through the open landscape to the horizon, distant hills, often with a glimpse of the sea.

As the turn of the eighteenth century came and went great men of the world were busy debating the merits or successes of art and nature, the battle of the ancients and the moderns or, of classical and Gothic architecture, especially when they were on their Grand Tour of Europe.

This is when fine art works collected by Claude Lorrain began impacting on the evolution of the English style painting and in the layout of landscape gardens. Claude in his art revealed balance and authority, especially in the manner in which he handled the interplay of light and shadow like a beautiful poem delicately capturing the reflection of colour on foliage.

These characteristics would soon transpose into garden design.

Claude took the whole idea of a ‘classical’ idyll whether at sea or on land and somehow made it seem real, especially for very wealthy Grand Tourists. Lyme Park, a house in the Palladian style…

Following their tour of Italy, and their discovery of Claude Lorrain and his works, they arrived back in England with bags bulging filled with the idea about going on a ‘quest for nature’ in a classical setting.

Their intellectual and poetic notions would play a large part in the broadening of sensibility so that gradually buildings came to be appreciated for the pleasurable or fearful thoughts and the feelings that they inspired.

Landscape Gardener Capability Brown’s design and styling of the English natural countryside to suit these new ideals let his wealthy patrons believe that when nymphs and shepherds came together with their elegant eighteenth century counterparts they would all feel comfortably at home together. 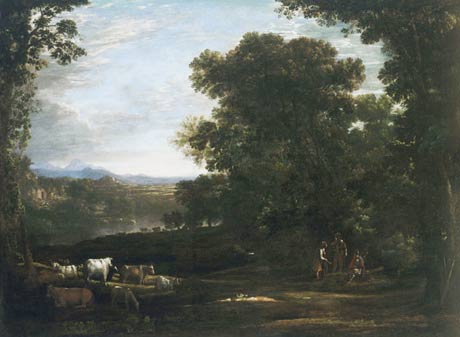 Landscape with Cattle and Peasants courtesy Philadelphia Museum of Art

The details of Claude Lorrain’s early life are sketchy, being born in a village of the independent duchy of Lorraine in France of poor pastry cook parents.

He learned the trade, but left his native Lorraine for Rome after they died when he was only just on 13 years old. He spent the next decade of his life embracing and learning about art.

Finally he settled in Rome and had lessons with Agostino Tassi a leading Italian proficient at the art of illusionist architectural frescoes, which became his teacher. He also spent two years at Naples with another pupil of Tassi called Goffredo, who is accredited for giving Claude a lasting interest in the rendering of perspective with great success.

The winter of 1626-7 found him back at Rome where he settled permanently. His first recorded landscape painted in 1629 is now in the Philadelphia Museum of Art in America.

It was not long after the beginning of the 1630’s that he started to rise toward the fame that he would achieve. 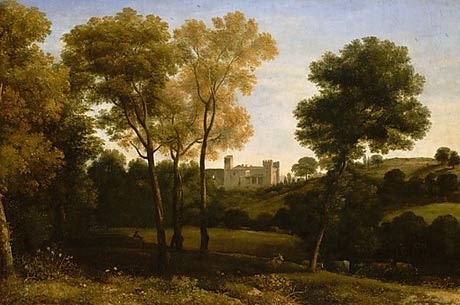 While he did not marry he is known to have had a daughter Agnese, who lived together with a pupil and two nephews lived with him. After a year’s apprenticeship to the artist Claude Deruet back in Lorraine for a year he joined the painters of the Academy of St Luke for a while about 1633.

It would not be until the mid 1630s that accurate records of his work would start appearing as he carefully documented every picture that he painted. His reputation was based on a series of landscape frescoes in the Crescenzi Palace at Rome now lost to us. It was his skill in representing, according to Filippo Baldinucci one of his biographers, ‘those conditions of nature which produce views of the sun, particularly on seawater and over rivers at dawn and evening’.

By 1637 he was receiving commissions from many different and diverse wealthy patrons including Philip IV of Spain. Quite quickly he had become the leading landscape painter in Italy.

He followed a standard recording process and wrote it all down in his opus the ‘Liber Veritatis or Book of Truth, which is now in the British Museum at London. This remarkable work contains some 195 drawings all of which have been carefully copied by Claude after his own works. He notes the patrons and places and who purchased each one, which is wonderful for art historians and over almost fifty years he documented some 200 pictures. French artist Nicolas Poussin (1594-1665), yet another master landscapist whose work included the now famous ‘Et in Arcadia ego’, which had an influence over Claude and his work. Poussin’s landmark image depicted shepherds gathering around a tomb and was viewed with great reverence. In ancient Hellenistic Greece those who lived in the cities generally thought about those who lived in the countryside as being privileged, leading a pure, rural, idyllic life.

Capability Brown transformed great tracts of the English landscape into natural curves crowning them with clumps of trees. He used mostly elm, oak, beech, lime, and fir from Scotland, London plane, larch and the Cedars of Lebanon. This vision also became known as the “Cult of the Picturesque” and exponents of it would debate its merits well into the next century.

Artists such as England’s Thomas Gainsborough (1727-1788) and Joseph Mallord William Turner (1775-1851) took Claude Lorrain’s works both to heart and mind with great alacrity. Turner was born into a family of modest means but had good health and a long life and it enabled him to pursue his artistic development to full fruition. He is seen today as bridging the gulf between the eighteenth century tradition of landscape painting and the art of the present day, creating a vision that pulsated with colour and atmosphere. 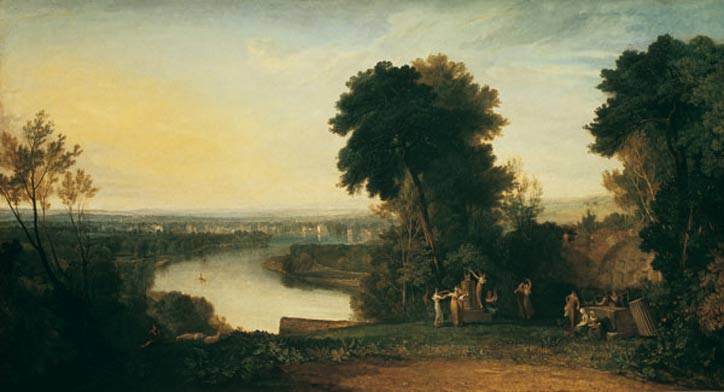 His confrontation with Claude Lorrain made an indelible impression on Turner and his work. His Thomson’s Aeolian harp is viewed from the Thames above Richmond where the figures of the dancers represent the four seasons and the classical past.

English born Australian artist John Glover (1767-1849) wanted to become known as the ‘English Claude’. He was a painter of romantic landscapes in Britain and Southern Europe before he arrived in Tasmania in 1831, the island state of Australia that lurks gloriously with intent at the bottom of the world.

Three of Glover’s grown up sons, one with his wife in tow had already shipped out to the Australian colonies in 1829 and so he and his wife followed, lured by their tales of the availability and beauty of the land.

Glover arrived on his 64th birthday with a reputation that was already formidable. He acquired one of the largest grants of land in Van Diemen’s Land and named his Australian property Patterdale after the place where he had his farm in the northern English Lake district and had wandered over moors and mountains seeking inspiration. Glover’s experience of European painting, and his admiration for the works of Claude Lorrain meant that he looked at the Australian native bush land with very different eyes to those more accustomed to it and it was not long before he became known as ‘father of Australian landscape painting’.

Today there are more Claude paintings in England than in Italy and altogether about 250 paintings out of a total of perhaps 300, and more than 1,000 drawings and 44 etchings have survived. Landscape with ruins, figures and trees a drawing by Claude Lorrain

His drawings are remarkable, executed in chalk, pen and wash, they have a spontaneity that is mesmerizing and you feel that you are with him on one of his sketching expeditions in Campagna. Morning in the Harbour by Claude Lorrain

Claude Lorrain was known for being kindly, reserved, contemplative, of a religious temperament and generous. He loved music and provided well for his heirs and friends who had supported him in life and his career. His paintings influenced generation after generation of aspiring and successful artists right down to the age of Modernism.