Age cannot wither her, nor custom stale her infinite variety. (2.2.244)

A lion statue found standing undisturbed in waters off Alexandria since some seventeen centuries ago in the first decade of our own century, is an enigmatic reminder of the lost city where the last Pharaoh of ancient Egypt, Cleopatra VII (69 – 30 BC) ended her days.

He stands like a silent sentinel in the murky depths, his paw resting on a sphere, guarding what was once the city’s portus magnus or grand port, confirming the accuracy of the descriptions of its many glories left by ancient Greek geographers and historians more than 2,000 years ago. Cleopatra VII whose name alone was exotic, much like the lady herself, lived in the generation just prior to the birth of Christ.

She became a legendary queen, renowned mainly for the sum of her seductions.

Of Macedonian Greek ancestry, Cleopatra was far richer than any other women in the Mediterranean area and much more than just another pretty face; a fact English poet and playwright Will Shakespeare (1564-1616) acknowledged and treated with tragic grandeur.

Her renowned love affair with two of the mightiest men of ancient Rome Julius Caesar and Marc Antony have helped make her memory live on. They were both captivated by her beauty and power.

“The barge she sat in, like a burnished throne, Burned on the water; the poop was beaten gold; Purple the sails, and so perfumed that The winds were love-sick with them; the oars were silver, Which to the tune of flutes kept stroke, and made The water which they beat to follow faster, As amorous of their strokes. For her own person, It beggared all description.” (2.2) Today Cleopatra is one of the most recognisable figures in history. She was a capable ruler of her people, understanding only to well how economy’s were shaped and was brilliant at working the political system, and the patriarchal community she lived in from an early age.

She had a lot of practice; her family the Ptolemy’s ruled Egypt in Alexandria for ten generations before her, while courting the most powerful Romans of their day and she grew up in an atmosphere of mistrust and power hungry men. It was the Greek architect Dinocrates (3322-331 BCE), who under the direction of Alexander the Great himself had built the city of Alexandria on the north coast of Egypt on the site of a former village.

His name was immortalized in a place that became well known for its literary, political and economic achievements especially during Cleopatra’s reign.

She was only 21, on the wrong side of a civil war with her brother and at the mercy of his troops when Julius Caesar arrived at Alexandria, only one day after Roman General Pompey the Great’s dramatic death, the dastardly act included decapitation.

Gnaeus Pompeius Magnus (106BC-48BC), usually known as Pompey The Great had been a political ally of her father. His defeat and death would become significant in the events that led to the transformation of the Roman Empire, from that of a republic to an Empire.

Cleopatra knew that following his dreadful death that she must quickly gain access to Caesar if she was to survive her brother’s plans to seize the throne for himself. She cleverly arranged a clandestine return to her family’s palace, reputedly rolled up in a carpet.

It was the home from where she had been exiled and where Caesar had taken up residence. Brought into his presence she quickly won him over to her cause.

In the months to follow she stood firmly at his side while he took on her brother’s troops and defeated them for her.

Pregnant with his child, he restored her to the throne so that she could guide it through the months of plague and famine that followed.

She took control of her country and its currency firmly and decisively and became renowned as a beneficent guardian of her subjects for nearly 18 years.

Cleopatra had to work both side of the system, keeping her links to the Greek elite and the Egyptian people who saw her as divine, intact. The Egyptian countryside during her tenure as pharaoh became known for its lack of revolts.

She was caught up irrevocably in the war that raged between Marc Antony, one of the three-man council, the triumvirs who ruled Rome after the assassination of Julius Caesar in 44 B.C.

They were Octavian, Mark Antony, and Marcus Aemilius Lepidus. Antony had been Caesar’s protégé and remained in constant conflict with Caesar’s adopted son Octavian. Allying herself with Antony, for whom she had another three children, Cleopatra endured until 31BC when Octavian declared war on her.

Antony had abandoned his Roman wife Octavian’s sister, an unprecedented act in Roman history at the time. Subsequently Octavian knew that Cleopatra would never leave Antony and that Antony would never abandon her either.

So he forced everyone to face the issue, which was a political scandal threatening the very unity of the Roman republic.

“Eternity was in our lips and yes, Bliss in our brows bent.”

When Antony and Octavian faced off against each other over the battle that was Actium in September 31 BC, it was Octavian who prevailed and Antony and Cleopatra retired immediately back to Alexandria where their ultimate fate was sealed.

Making their peace with each other they dramatically ended their own lives and Octavian went back to Rome to become Princeps, the first citizen among equals. It was later in his life when he was awarded the title Augustus (63BC – 14AD) by the Roman Senate, that he became the first of its Emperors.

For over 1600 years the whereabouts of Cleopatra’s legendary city and palace complex remained unknown, the puzzle of its disappearance never solved. 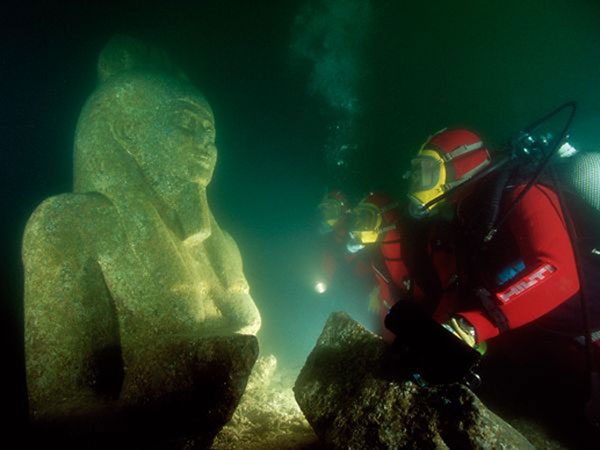 Poor visibility and a great deal of silt kept the mystery of the ages hidden from a team led by French underwater archaeologist Franck Goddio, who had been conducting topographical surveys off the modern day city of Alexandria since the early 90’s, seeking ancient shipwrecks and lost cities below the seas.

In 1996 Franck Goddio and his international team discovered the remains of a city in the western part of Aboukir Bay, where it had been completely submerged following a massive earthquake scientists say happened during the 8th century.

The archaeological material revealed that Thonis-Heracleion the same city with two names; Heracleion, for the Greeks and Thonis for the Egyptians was indeed the city they had found under the sea.

Amazingly the ancient site had been found just meters from the current shore-line.

In cooperation with the Egyptian Ministry for Antiquities and the support of the Hilti Foundation, the team has since recovered a great deal of important information on the city’s ancient landmarks, such as the grand temple of god Amun and his son Khonsou and the city’s harbours.

At the underwater site archaeologists have so far discovered over 20,00 sunken objects, which are all great treasures of their age. They included both Roman and Greek shipwrecks, as well as some 26 sphinxes hidden for all that time in what had been one of the largest human-made bays ever in our world.

A colossal stone head believed to be a model of Caesarion, the tragic son of Cleopatra and her lover Julius Caesar was also found, along with two sphinxes – one thought to be Cleopatra’s father, Ptolemy XII One huge quartzite block toppled in the 4th century was engraved with an inscription depicting Seti I, father of Ramses II, known as Ramses the Great (1292-1190BCE) who is perhaps Egypt’s most celebrated ruler.

On the deck of a boat imported ceramics and statuettes abounded, as did bronze ritual vessels, amulets and objects that were for devotion, gifts for the Gods.

What remains of the palace in which Cleopatra the last of Egypt’s Greek speaking Ptolemaic rulers died from the self-inflicted bite of an Asp and where Marc Antony fell dramatically on his sword, is mainly a mass of royal rubble.

However it is a poignant reminder of the temples, houses, palaces, streets, jewellery, statues and amphorae that once sheltered people, drove the economy and stored food for them as they went about their daily lives.

Let Rome in Tiber melt, and the wide arch Of the ranged empire fall. Here is my space. Kingdoms are clay; our dungy earth alike Feeds beast as man; the nobleness of life Is to do thus; when such a mutual pair And such a twain can do’t. (1.1.34)

Georg Jensen’s wonderful designs of the early 1900’s, like this necklace dating from 1904, always seem current and contemporary, not part of any passing fad, fashion or fancy, entirely a classic, with a life of its own and manufacturing standards of renowned excellence.