It is a wondrous thing when all meetings and purposes are aligned, as was the experience for me when I was able to meet and interview both the playwright and director of the play Closure.

These very personal moments impacted on my response to this superb piece of theatre now showing at Chelmer Community Centre, Brisbane, revealing how ‘the youngest among us can bring out the best in the oldest’.

Ron Blicq is an inspiration, a remarkably energetic ninety year old citizen of the world. His life is delightfully full of family, writing, education and much more. He is a man of wisdom who generously shares his optimism and experiences to enhance the lives of others.

Gary Kliger, Director of Closure demonstrated his sensitivity to the complexities of family relationships in this carefully directed play. His hard working ethic and attention to detail was rewarded in this very fine production. His deep understanding, extensive experience and knowledge of the role of a director permeated his outstanding theatre practice. In Gary Kliger’s own words “Closure has been a challenge to direct and I recognised that instantly when I was offered the chance to direct it for the Centenary Theatre Group.

It is a deceptively simple piece, which contains layers of meaning and emotional content. This contradicts the seemingly straightforward story of a man searching to find out if his father is still alive after many years of not knowing who he was”.

Gary Kliger’s direction certainly honoured, extracted and communicated the multi-layered text of the play, ensuring that the dialogue delivered a subtlety that clarified motives and engaged the audience in a deeper understanding of both characters and their motives. The aftermath of wars is horrifying lives lost, memories tainted, injuries unbearable, destruction widespread, economies decimated and the pain of witnessing death indelibly etched on the souls of both victims and perpetrators.

However an often neglected consequence of war are the children who are born as a result of romantic liaisons between armed forces personal and the citizens of the countries in which they are stationed.

These children, as adults often seek to find closure and discover the identity of their unknown parent.

Ron Blicq has seized this theme and explored the impact of one of these children now an adult, tries to reconnect with his father Gordon Devereaux, who he has never met. 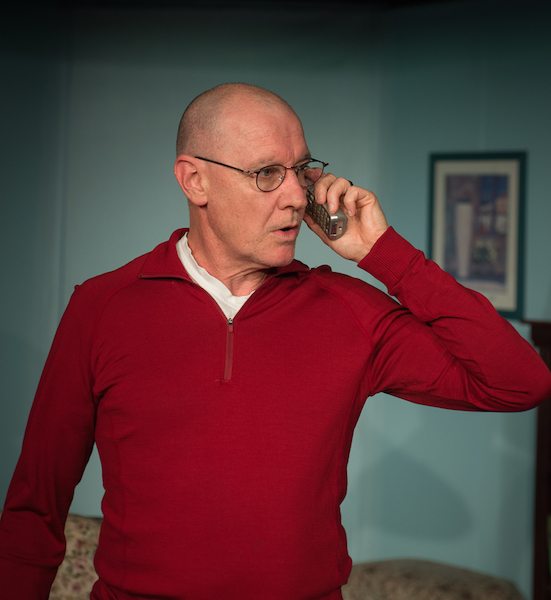 The audience first meets Donald discussing on the phone with his son Kevin, a letter from his recently deceased mother Wendy.

He called together a family gathering to discuss the contents of this letter. However Kevin was unable to attend this crucial family meeting.

Fortunately his daughter Claire is present, encouraging and supportive.

The letter coupled with a single postcard offer the only clues to his father’s whereabouts.

It briefly outlines his mother’s liaison and a longing for her son to know his father.

An important clue is that “Gordon said he could see snow covered mountains from his bedroom.”

Donald reminisces about his childhood where having no father created anguish and a feeling of being “incomplete”. His wife Daphne is very protective of her husband and is concerned about his vulnerability.

She questions the validity of pursuing Gordon’s whereabouts.

Paul’s mother has had firsthand experience in the process of trying unsuccessfully to connect with her own father.

Erik gives a striking performance, exacting from the role a balance of professionalism and compassion that was highly convincing.

The scene now moves to Gordon’s home in Vancouver, Canada.

This where an angry conflict erupts between Paul and Gordon with strong denials of any knowledge or involvement by Gordon. He adamantly refuses any further contact or possibility of a meeting with Donald. Helen Devereaux (Debra K Chalmers) matriarch of the Devereaux family, appears apprehensive and well aware of the tension between her husband and Paul. Donald’s disappointment about connecting with his father is eased by the arrival of his nine year old grandson Gordie Summers (Reghan Hobby). He bounces onto the stage with the style of a seasoned performer, belying the fact that this is his stage debut. His vitality, energy and stage presence becomes paramount as he is the catalyst for the adults embracing change in this engaging narrative.

Gordie’s endearing love of his grandparents is a reflection of his own mother Claire’s love of her parents.

Claire, a journalist for The Source Magazine, while researching for an article Where Are They Now, uncovers the fact Gordon Devereaux was the Flight Leader in a rescue mission in France during the World War II.

After much heated discussion between Claire and her father, he finally agrees to her interviewing Gordon in Canada in a professional capacity.

He also extracts a promise from her that she will not reveal her personal identity.

Act One builds the narrative, explores the characters and creates the settings. Act Two detonates with tension, gradually unravelling the mystery.

The Playwright Ron Blicq understands children and highlights the importance of play not only in terms of child development but in cementing real and lasting relationships between children and grandparents. The role play scene between Gordon and Gordie as they re-enact pilot and navigator on board a Mosquito Plane was a real joy to witness.

The playful interaction was enhanced by the creative lighting and sound effects fashioned by Brian Hobby who took the audience on board the aircraft and on the journey with Gordon and Gordie.

The wooden floor of the theatre trembled like the wings of a bomber as it took off down the runway.

Brian Hobby also selected music to enhance the narrative, as a fan of Frank Sinatra Come Fly With Me certainly complimented the former action. The many scene changes in Act Two set a challenge for Tristan Holland. He ably designed an innovative rotating set that captured two distinctive homes in different continents.

Helene Holland painted a Canadian mural that added wonderful authenticity to the production, capturing the essence of the earlier clue in Wendy’s letter.

The character development during Act Two was beautifully written, the acting respecting the playwright’s intention.

Claire (Simone-Maree Dixon) oozed effervescence and a natural charm in her role as loving daughter and nurturing mother.

Debra K Chalmers intelligent approach and her understanding of the role is vital in establishing her credibility as she uncovers the truth about her husband’s past.

The appalling destruction of war is emotionally expressed by Gordon “I unearthed the arm of a young girl no more than six or seven, her doll was still clutched in her hand.”

The tragedy within the play was thoughtfully balanced with humour and the warm personalities of the characters. The power children can unknowingly hold to ease the healing process has been explored with great finesse in this powerful play.

The innocence and warmth of Gordie is the catalyst for bringing the families together with ‘Closure’.

Sunday 17th is SOLD OUT

This gripping drama explores the journey to closure, and reveals how the youngest among us can bring out the best in the oldest

PS Rose’s next article will be an interview with the playwright of Closure, who travelled from Canada to see the production.

Rhiannon Hart & The Umm-Ahhs are about to infiltrate your world with their catchy blend of pop. They were favourites at this years Woodford Folk Festival and have been winning hearts everywhere. They have just announced the release of their debut album The Simple Joys of Maidenhood to be launched on 16th April @ Beetle Bar, Roma Street Brisbane City.