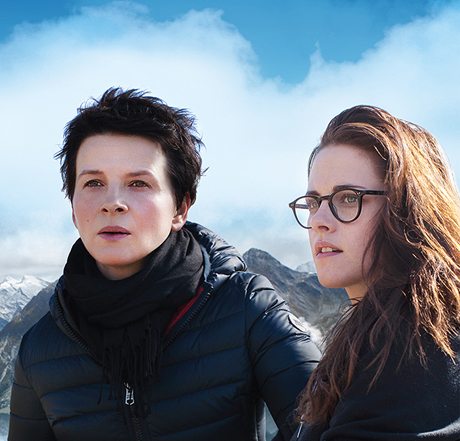 Recently I struggled when writing a review, endeavouring to shape my words in describing an evening of live artistry when two great musicians, one with their voice and one with their playing of an instrument inspired by each other together reached a rare pinnacle of achievement.

This is a state that to my mind and experience usually only happens in ‘live performance’ on stage and one we are not really used to witnessing at the movies.

Certainly I have seen many great movies and been moved to tears, laughter and often complete despair as they have engaged my emotions. However when viewing the Clouds of Sils Maria my experience was very different. It exceeds all boundaries as it pushes all those involved, including the audience outside their comfort zone.

Winning critical acclaim overseas, directed and written by Olivier Assayas, Pinnacle Films splendid Clouds of Sils Maria is a thought-provoking piece to be released at Palace and other select cinemas around Australia. This movie is breathtaking in its intensity, ennobled by sense and sensibility and the subtlety of the performances given by its two main actresses – Enter our Giveaway and WIN a double pass.

Acclaimed actress Juliette Binoche and Kristen Stewart a pre-eminent young actress from Hollywood come together in a powerful, clever and creative casting connection for this very special meditation about acting, fame and aging.

Binoche plays Maria Enders a famous actress and Stewart her personal assistant Valentine, who enjoys her trust and friendship. These two superb actresses make their own growing discomfort with each other highly personal.

For much of the play they are isolated together in a cottage in the Swiss Alps where desire is not the focus, but dependency is explored. Maria sets her own pace, having a powerful effect on Valentine, in this interpretation of life that is perhaps truer than life itself.

As we discover the home belonged to author Wilhelm Melchior and his wife Rosa. 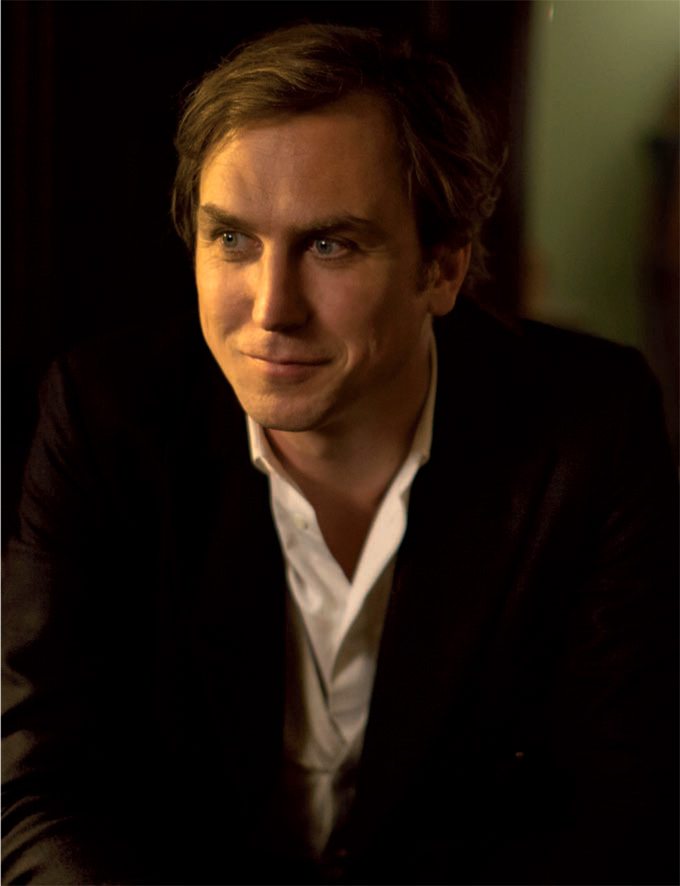 He wrote the script for the pivotal play that helped build Maria’s reputation from when she was 18 years of age, as the famous actress she has become.

During that time he and Rosa became like parents to the young Maria facing her first acting experience. Maria races across the countryside with Valentine at her side by train to comfort Rosa when William unexpectedly dies, however little do they know that they will forced to face a panoply of emotional challenges as a result.

Prior to the trip Maria Enders had promised Klaus a young director (Lars Eidinger) making a name for himself that she will once again feature in the original play Maloja Snake written by Melchior although this time it will be different.

She won’t be playing the original youthful character Sigrid that made her famous, but Helena the older woman in the relationship who ended up committing suicide because of despair.

Rosa (Angela Winkler) is fleeing her own memories and gives them the cottage to stay in because Maria has revealed she is going into rehearsals soon. Also, in the peace and quiet of the Swiss countryside Maria will be able to take time out to re-acquaint herself with the role of Helena, one she never thought she would play.

Sigrid will be played by a new young actress Jo-Anne Ellis (Chloe Grace Moretz), known only for starring in futuristic Sci-Fi’s… 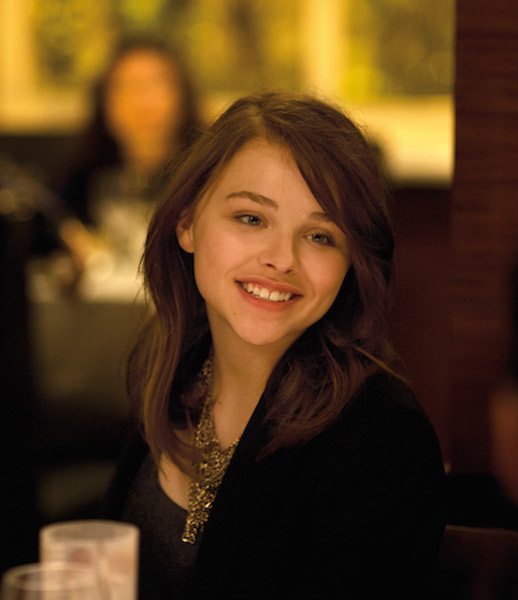 It’s a bizarre moment as Valentine endeavours to have her boss Maria her passion for the medium by having her watch Jo-Anne in her latest movie on an iPad.

Maria is frustrated at Valentine about what she perceives to be her limited perspective on life, shaped by her passion for a medium of entertainment her own fierce intellectualism won’t allow her to consider seriously.

Valentine believes that beneath the Lycra outfit and wig her heroine Jo-Anne is wearing is indeed a serious young actress. She is waiting for a chance to show off her skills – as Kirsten Stewart now certainly does.

The parallels are drawn and she proves what an outstanding young actress she really is.

German actor Lars Eidinger as Klaus Diesterweg the Director of the coming play is a character finely drawn, achingly subtle and superbly acted, which we can only suspect also mirrors Olivier Assayes own.

Chloe Grace Moretz in her smaller role as Jo-Anne Ellis skilfully reveals her own character as one of great depth, one we would perhaps like to have explored further.

She comes together with Maria and Valentine meeting up in a hotel with her latest beau Christopher Giles (Johnny Flynn), a married man. Rather than finding the silly empty headed girl she perhaps expected, Maria discovers there is a great deal more to know about the young lady taking on her original role.  She’s both savvy and street smart. However all is interrupted when the wife of Giles is reported by the tabloids as committing suicide.

Instead of meeting his stars in a restaurant in public, Klaus is now forced to whisk them away to his private club away from the prying paparazzi.

Together Binoche and Stewart guided by Assayes blur all the lines and exceed all boundaries as they meld their characters both ‘real’ and ‘unreal’ together.

Binoche, or is it Maria, bravely exposes that extraordinary mixture of confidence she portrays so well, which is underlined with a powerful vulnerability and insecurity. This is interestingly illustrated when she and Valentine go down to the lake and strip off to go for a swim. Totally uninhibited Binoche bares her all, while Valentine keeps her brassiere and decidedly ‘manly’ style underpants on.

Afterwards Maria begins to rehearse her lines or the play with Valentine reading the role of Sigrid, helping her ‘boss’ get ready for opening night.

As they move around the house and out into the glories of the Swiss countryside it becomes difficult for us to separate all the characters now laid out before us. In retrospect they become the ‘sum total of all our own experiences’. The rare phenomenon the ‘Maloja Snake’ in the Swiss Alps

The valley where the pair are staying is famous for the arrival of the Snake of Maloja, when warm air rising up the slopes of the Maloja Pass in Switzerland and is transformed into mist or cloud.

Entirely predictable and appearing with the precision of a Swiss Watch, the snake forms up and winds its way along the valley at daybreak when conditions are just right. They are both aware it will happen on the morrow. Stewart as Valentine matches Binoche as Maria her mentor in ability, at least until that point where she realises that their relationship has become unhealthy.

As they ascend the mountain to view the phenomenon together she has the wisdom or is it fear of dependency, and is driven to quietly and suddenly vanish from view leaving Maria on her own. Indeed as we now found out when Rosa arrives, that William had himself committed suicide.

Valentine however has underestimated Maria, who then reveals she won’t give in to despair or destroy herself like Helena by suiciding.

She is an independent woman after all. We are left with an image of Maria confidently working with her London assistant, keeping her at arms length as she goes on to score a triumph as Helena on stage. 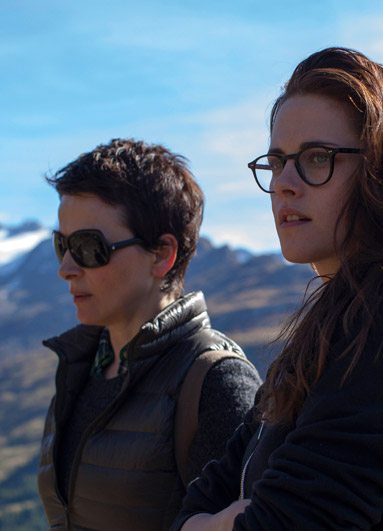 This exceptional expose of women’s feelings is about enjoying the intimacy of a friendship rather than desire, which also makes it very refreshing.

My only searching comment is that I would have liked Assayes to flesh the story out just a little more.

That being said Binoche is at the top of her game in this.

To my mind, she’s reached that marvelous point in her own life and career where she is not only dealing with the passing of time, but is in her prime as an actress of exceptional abilities.

She is completely brave enough to reveal herself. She knows that getting old and suffering really sucks and yet she offers us a reflective view of how to retain innocence and hope in maturity.

The play reinforces that we often remember what it suits us to remember, rather than reality.

Poignantly it makes the point that if we allow ourselves to be manipulated there will always be consequences.

Clouds of Sils Maria is a fiercely intelligent film; a brilliant interpretation of life, perhaps even truer than life itself’.