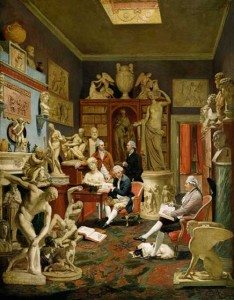 The Regency era in England from 1811 when Prince of Wales ruled England until his father’s death in 1820, saw the rise of the first professional art critics. They were either wealthy connoisseurs or collectors, like Richard Payne Knight (who had a fine eye for erotica) or working journalists like William Hazlitt. He contributed to monthly periodicals like the London Magazine. Trained as a painter he had first hand knowledge of the technical and aesthetic problems artists faced. Collectors became more and more knowledgeable about technical aspects of ancient and modern art. Concerns with authentication and with aesthetics created a persistent tension. Four collectors Sir William Hamilton (notorious Emma’s Husband) Payne Knight, CM Cracherode and Charles Townley pictured here with vases, medals, bronzes, drawings and paintings, were vital to the founding and growth of the British Museum. Charles Townley said ‘In every Art good models give birth to ideas by exciting the imagination; theory furnishes the means of expressing those ideas, practice puts these means in execution and this last part, which is always the most common is also the easiest’