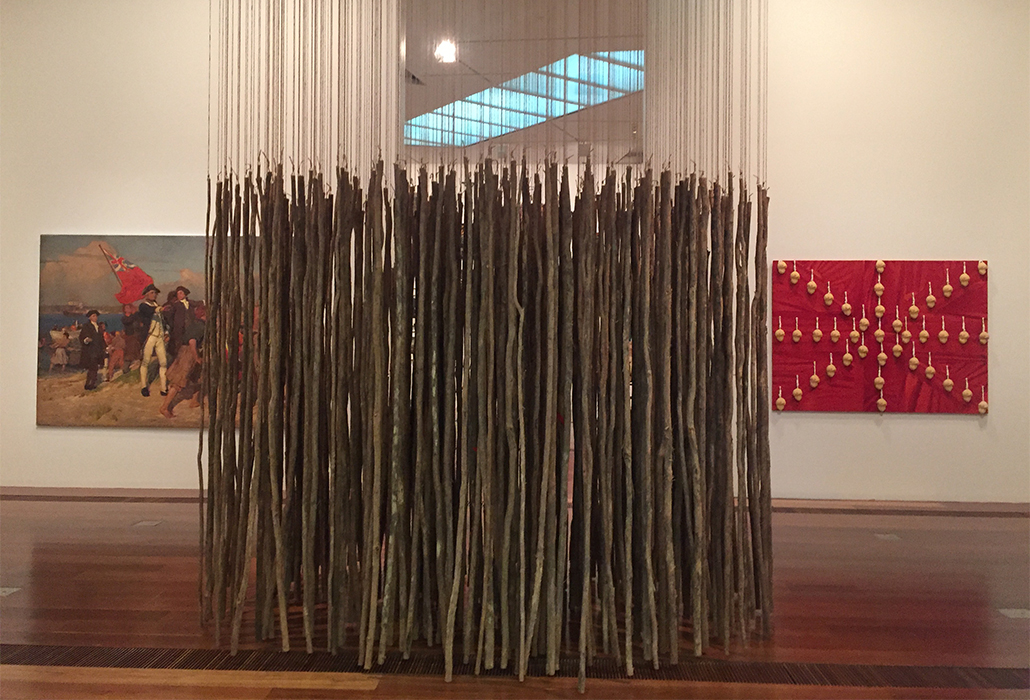 Australia’s style today is very hard to define, and has become like a chameleon; constantly changing colour. The notion Britain’s Lieutenant James Cook ‘discovered’ Australia, denies the presence of Aboriginal people for 65,000 years. It also overlooks all the other European and regional visitors to the coast of what was known as the great southern land, Terra Australis, before him. 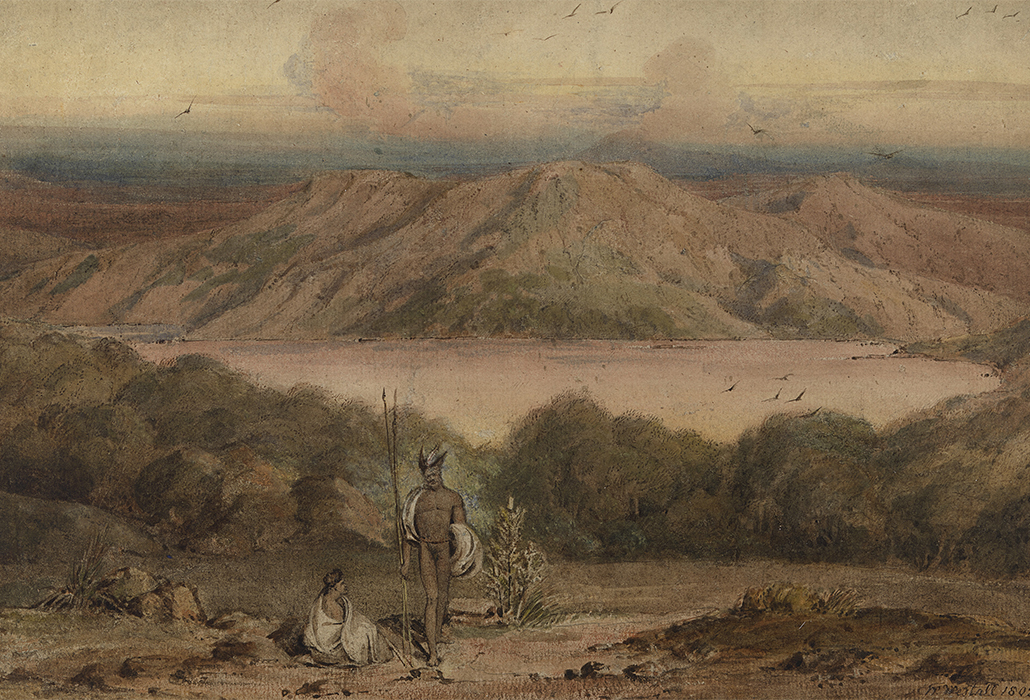 Since the seventeenth century, the still not fully explored land mass had long exercised Europeans’ imaginings about the world. Although once Cook had landed, bringing back vast collections of natural and ethnographic material sparking both public interest and expanded scientific study, the huge island began to take a more realistic size and shape on world maps. 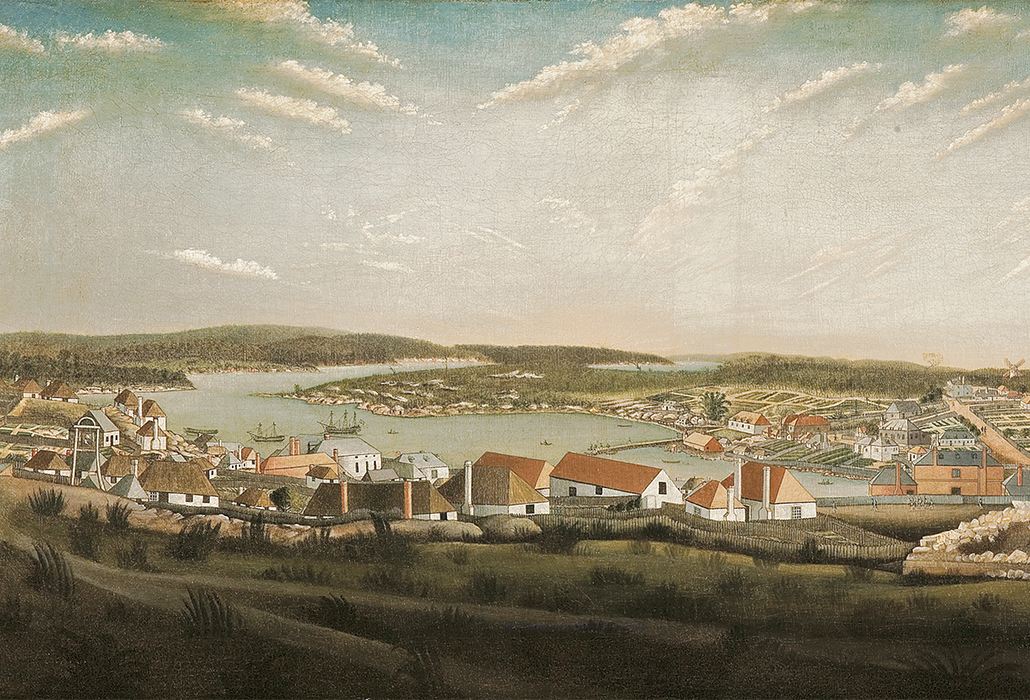 Detail: Unknown, Thomas Watling (after), View of the town of Sydney in the colony of New South Wales c. 1799, oil on canvas, 65.0 x 133.0 cm, Art Gallery of South Australia, Adelaide, Gift of M.J.M. Carter AO through the Art Gallery of South Australia Foundation in recognition of the abilities of James Bennett to promote public awareness and appreciation of Asian art and culture 2015. Donated through the Australian Government’s Cultural Gifts Program

Showcasing the most comprehensive national survey of Australian colonial art presented concurrently by any institution around Australia to date, Colony: Australia 1770–1861 and Colony: Frontier Wars are two exhibitions now open until July 15, 2018 at the NGV Australia, Federation Square, Melbourne. 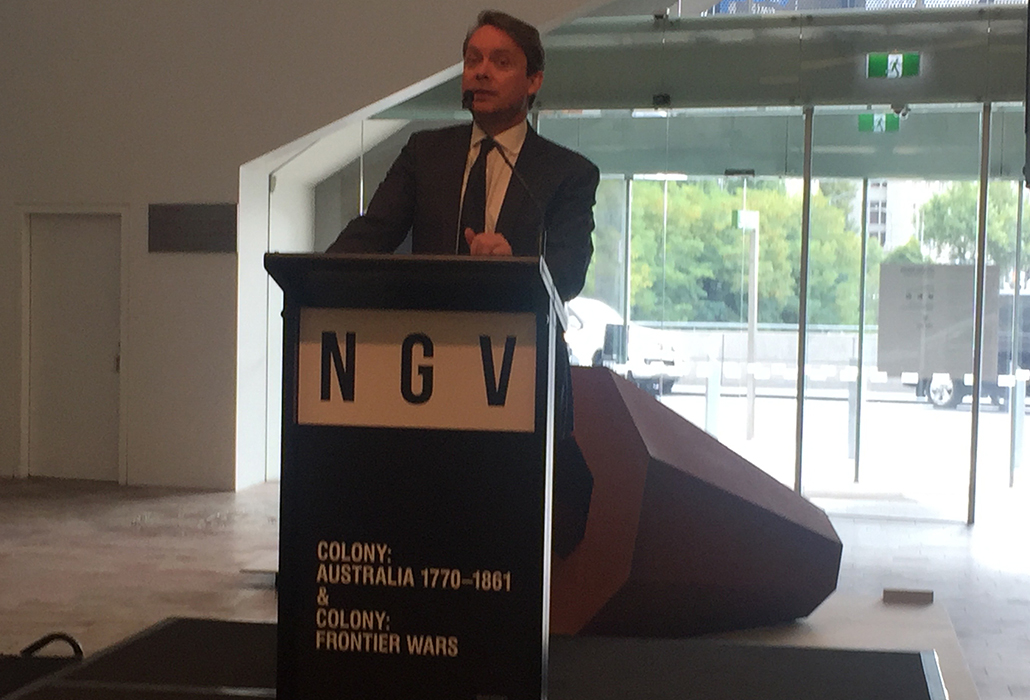 Tony Ellwood, Director, NGV, extensively discussed the content, talking about how a combined display of more than 800 extremely rare and precious works tracing the development of Western art, craft and design since 1770, has been painstakingly and poignantly assembled by the curatorial staff over the past few years. 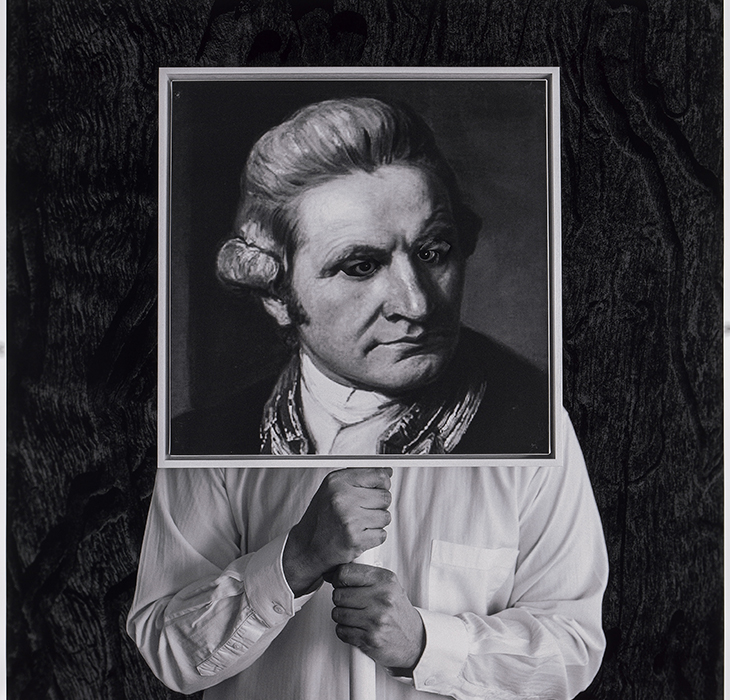 He said “…Cook’s landing marks the beginning of a history that still has repercussions today…In order to realise this ambitious project, we have drawn upon the expertise and scholarship of many individuals from both within and outside the NGV. We are extremely grateful to the Aboriginal Elders and advisory groups who have offered their guidance, expertise and support”, Tony Ellwood said. 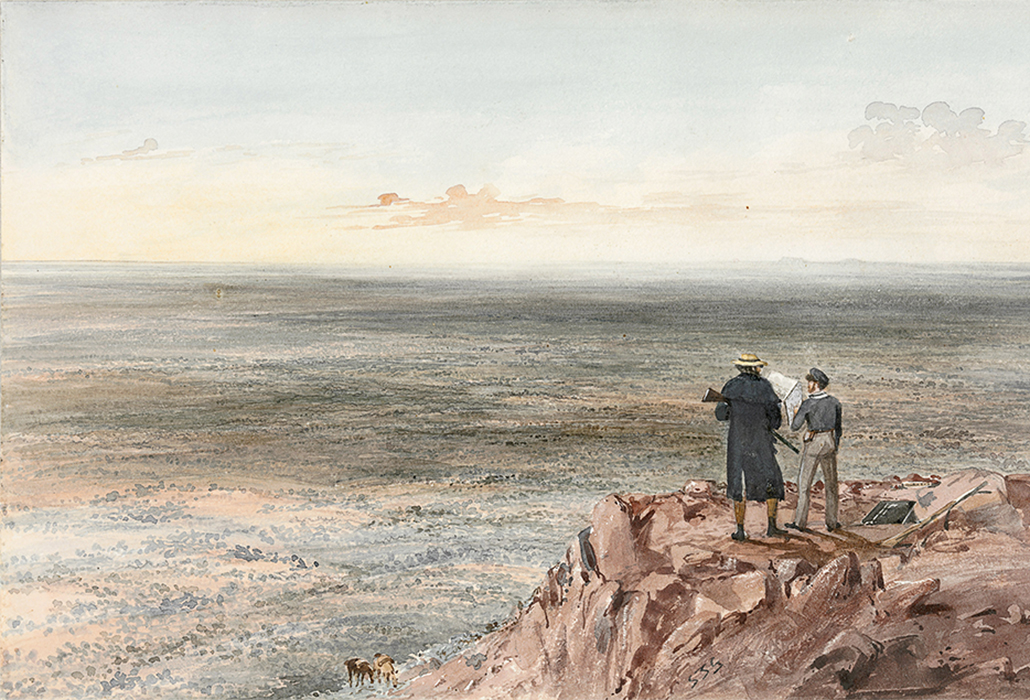 These two powerful, impressive and superbly displayed shows are vitally important, essential to a much wider Australian cultural conversation. They insightfully and boldly reveal how two colliding cultures remained separate, although together, their experiences being the polar opposites of each other. 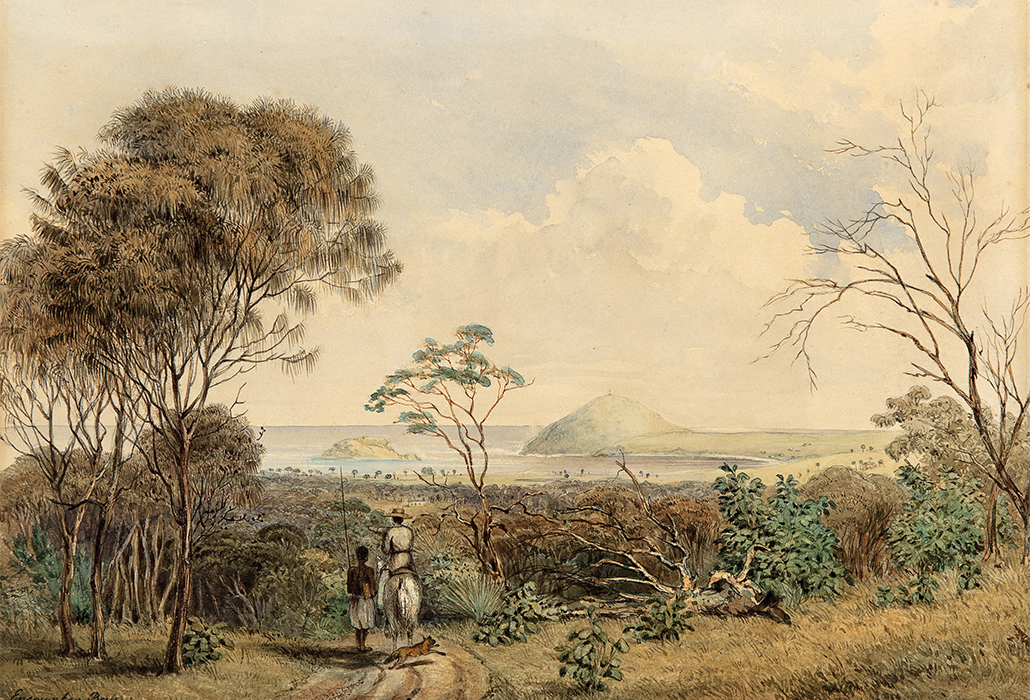 They are packed full of interest, rare, unique and very special works that require close examination. If you are visiting you should be prepared to put aside ‘time’, because there is so much to look at and see about where we come from, where we are and what we aspire to do. 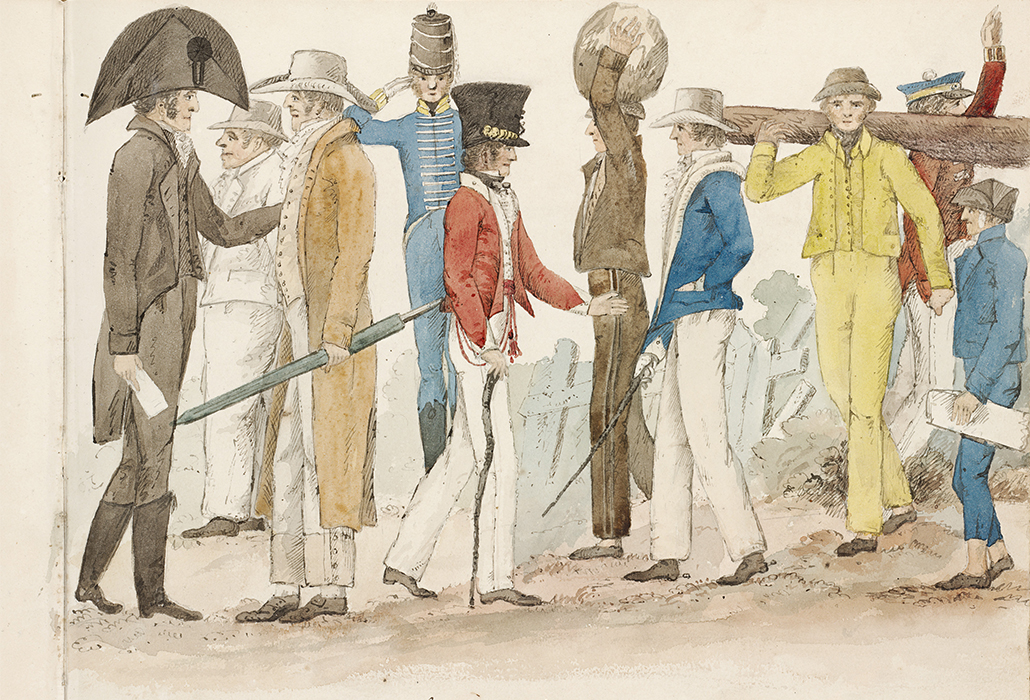 Collectively the exhibitions are about exploring the people and their shared history, from after the landfall of Captain Cook to the first convict settlement and up to 1861. This was when the National Gallery of Victoria came into being. 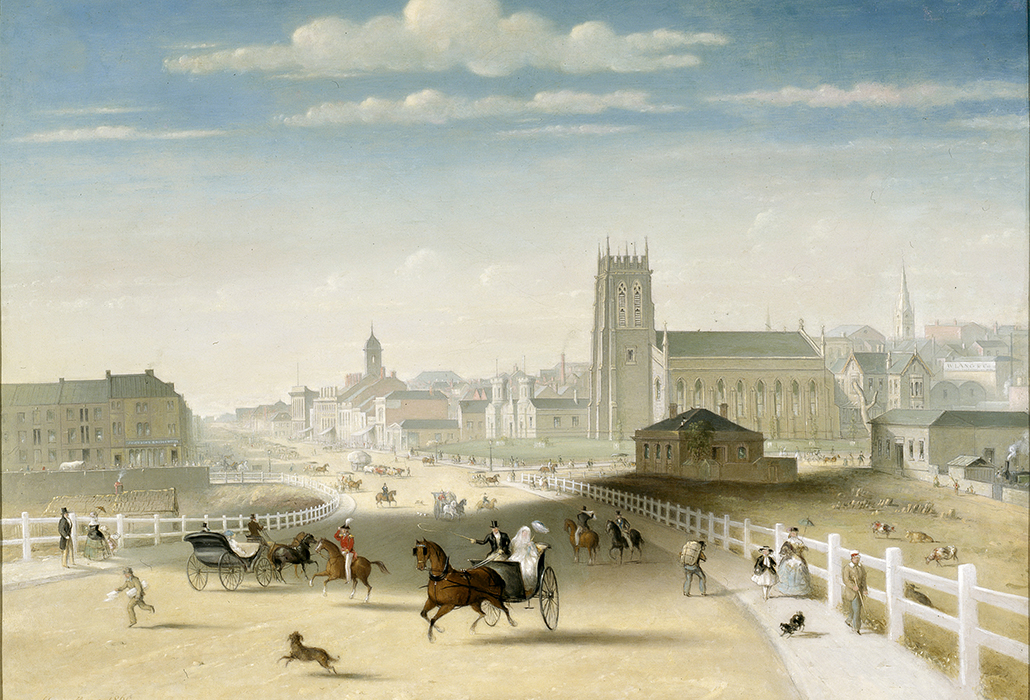 Victorian audiences in particular have rarely seen or had access to the splendid array of materials created in the decades prior to the settlement of Melbourne in 1835. 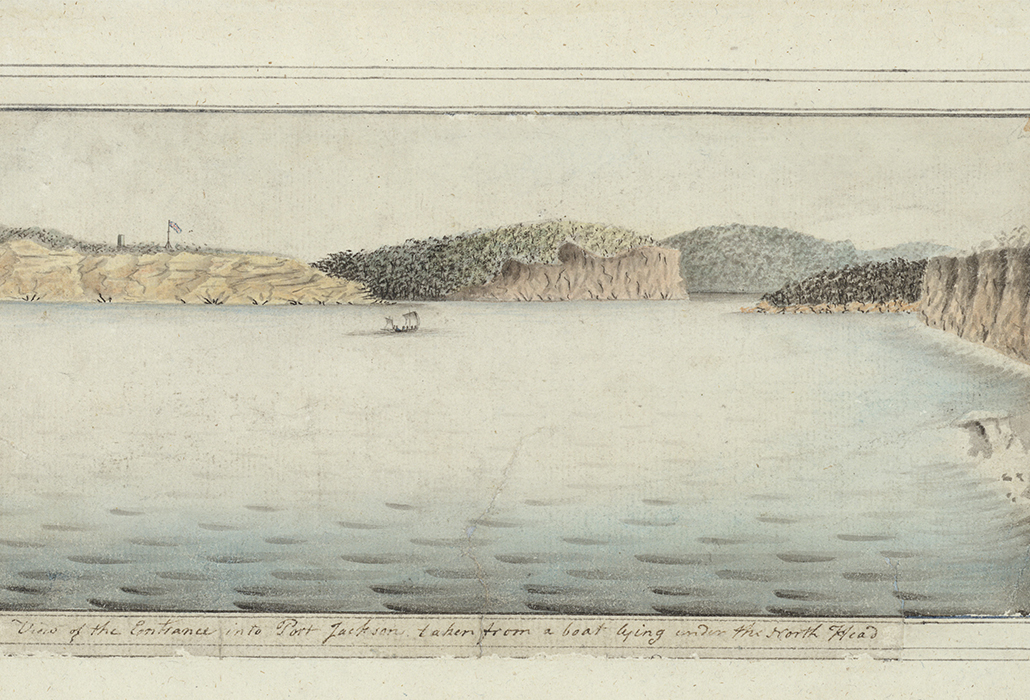 A view of the entrance into Port Jackson (Sydney Harbour) taken from a boat lying under the North Head c. 1790 was recorded by the artist simply known as the Port Jackson Painter, and is on loan from the Rex Nan Kivell Collection: National Library of Australia and National Gallery of Australia, Canberra. 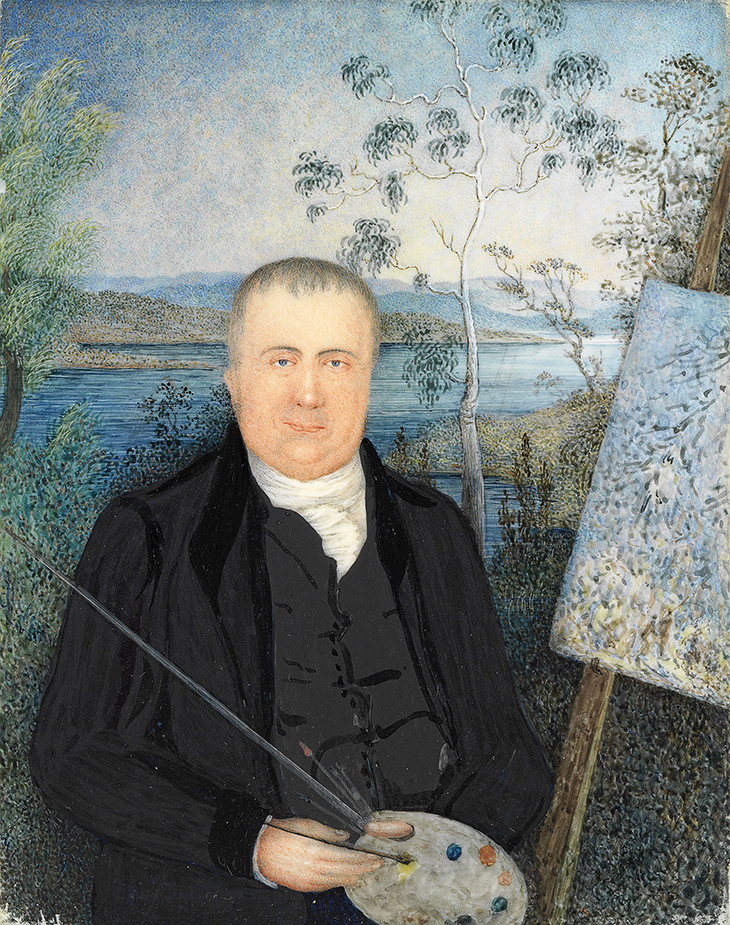 The Port Jackson Painter was one of the most prolific of the First Fleet artists, responsible for revealing how the life for people in the area we know now as Sydney was transformed following the appearance of two ship’s boats in the harbour looking for a better site than Botany Bay for the establishment of a British colony.

It was Joseph Bank’s report on flora that led to Australia’s colonization. At first the need to produce an adequate food supply in such unfamiliar soil and harsh climate was the major pre-occupation for many and hardship provoked ingenuity, not culture or fashion.

The memory of landscaped gardens in fashionable England seemingly as remote in motivation as they were in distance.

In every key settlement colony of Britain, the initiative first was to establish an effective propagation ground to nurture young seedlings and grafted fruit trees, assuring the colonies economic viability.

Although Joseph Banks when he came with Lieutenant Cook only dug into the earth to take away specimens, it is for that reason many consider him the founder of Australian gardening.

A Mrs. Meredith recorded she deplored the system of clearing employed, wherein every native tree and shrub was dug out giving a ‘…most bare and ugly appearance to a new place’.

She discussed the care given to ‘planting woods and groves in England’ noting that in her new country, the opposite was the case. 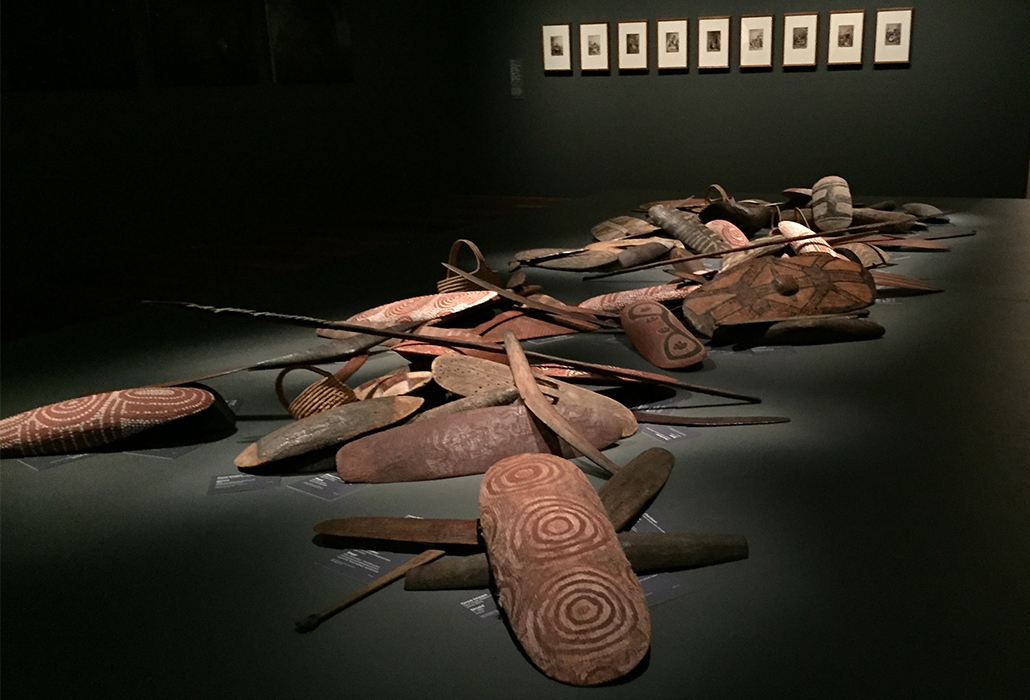 Colony: Frontier Wars located on the second floor of NGV Australia is a powerful response to the exhibition on colonisation on the groud floor, through a range of historical and contemporary works by Indigenous and non-Indigenous artists dating from early colonial times to present day. 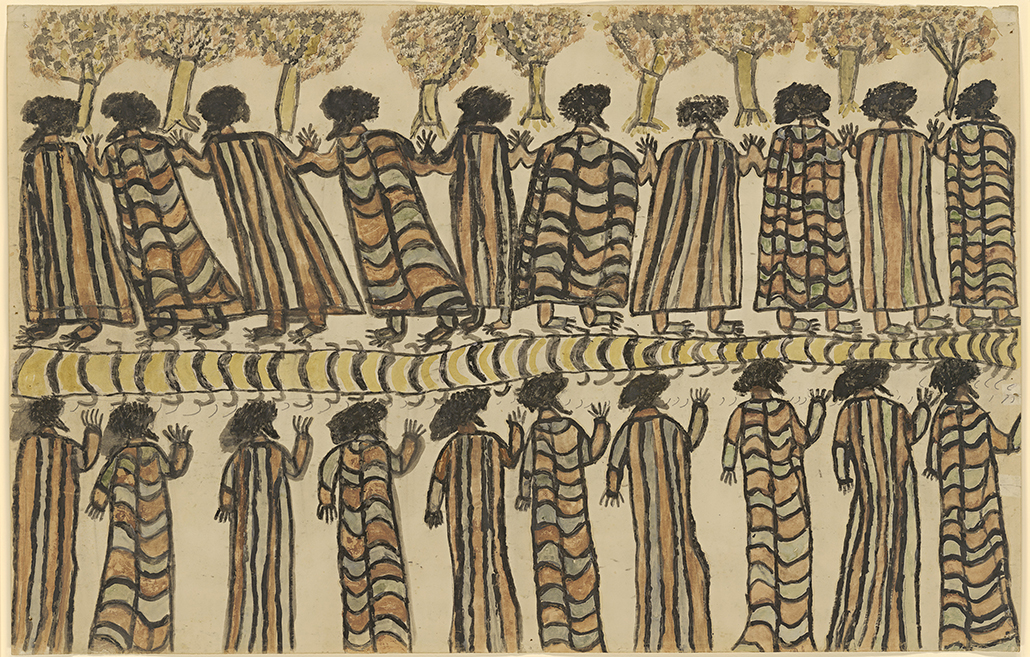 It powerfully explores what Aboriginal people experienced because their feelings have been impressively expressed through works of art that are part of the collection or on loan from all over Australia. 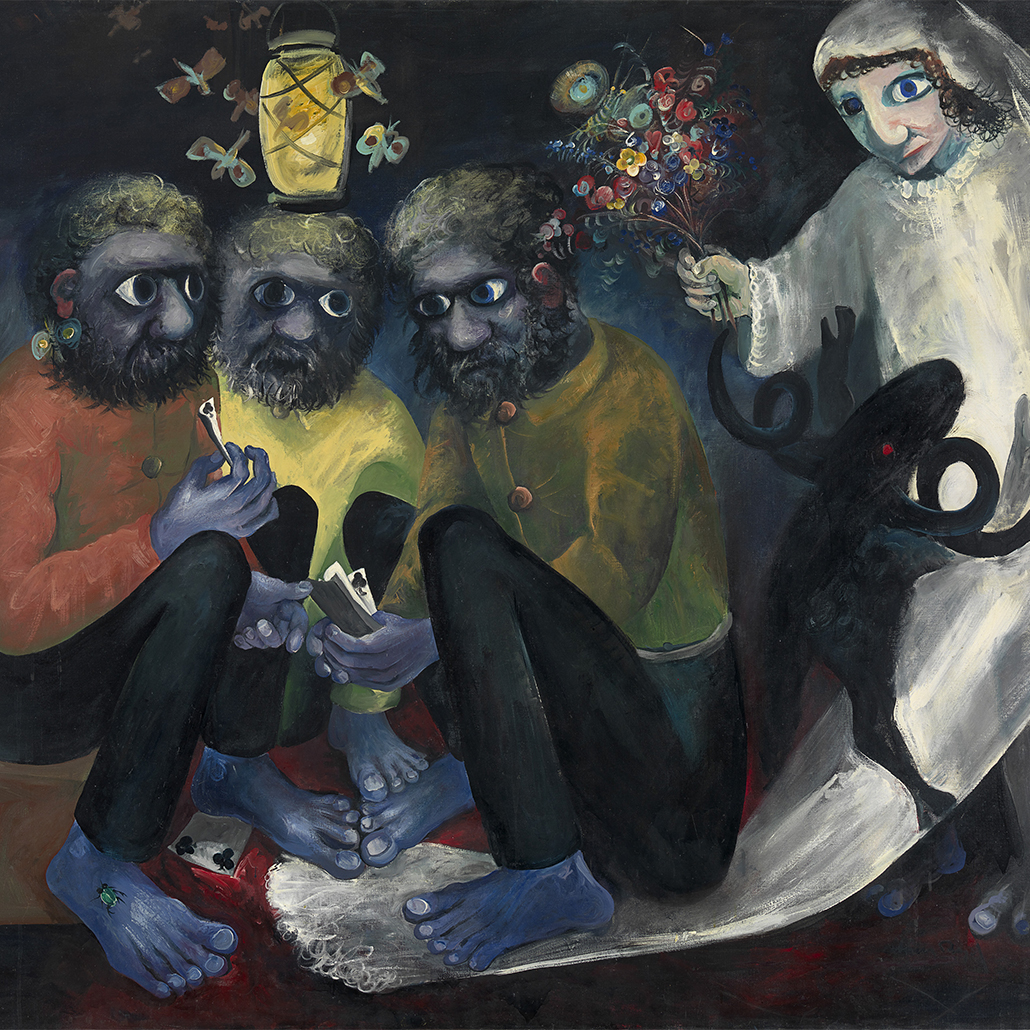 No one would foresee how the difficulties encountered by the indigenous population in the vicinity of the first landfall occurred. They could not have known or understood what would follow that first wave of British colonisation.

At least half the indigenous population died and the remainder disposed from their land their culture disparaged through colonisation, leaving ‘a scar on the earth mother’s soul’. 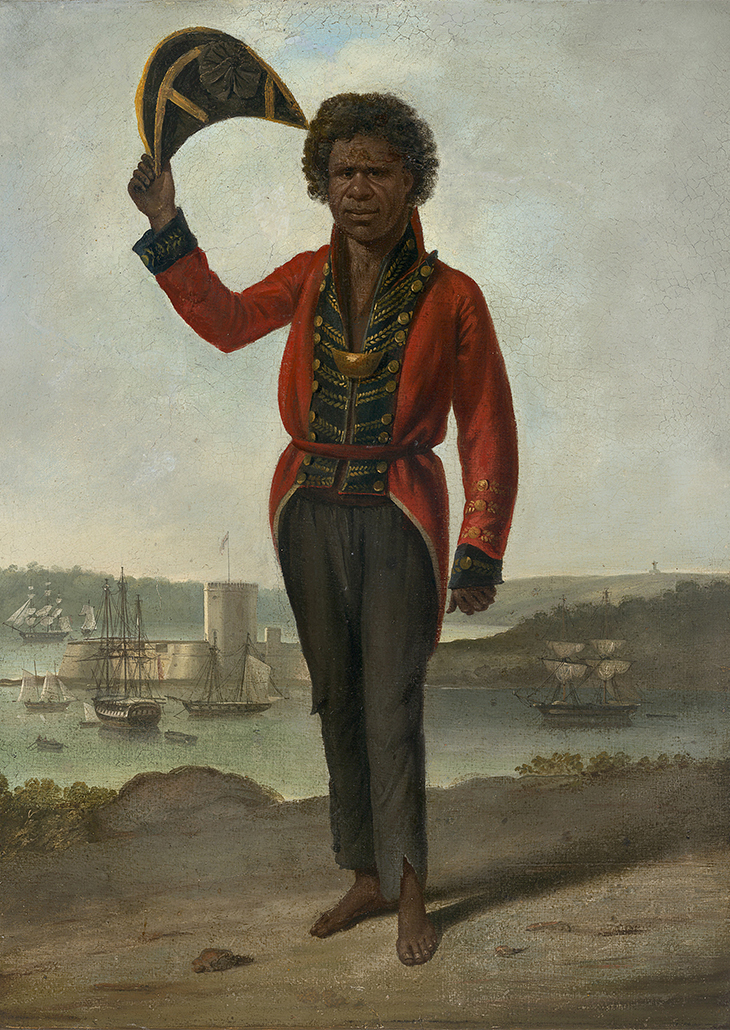 There are two portraits of Captain William Piper of Sydney and his Wife Henrietta and their children by the English artist Augustus Earle (1793-1838). The artist spent nearly three years in the colony and his paintings of the later 1820s, now in the Nan Kivell Collection in the National Library of Australia, are of historical and artistic importance. None more powerful than his portrait of Bungaree, a well-known native of New South Wales c1826, considered a ‘worthy and brave fellow’. He was the first indigenous person to circumnavigate Australia (with Lieutenant Matthew Flinders), becoming a crucial member of three major naval expeditions, and the subject of at least seventeen portraits.

From nineteenth-century drawings by esteemed Wurundjeri artist and leader, William Barak, to the iridescent LED light boxes of Jonathan Jones, this exhibition reveals how Aboriginal people have responded to the arrival of a group of people who did not know how to feel what a country should feel and how their distress would eventually turn from being a whisper into a disruptive roar. 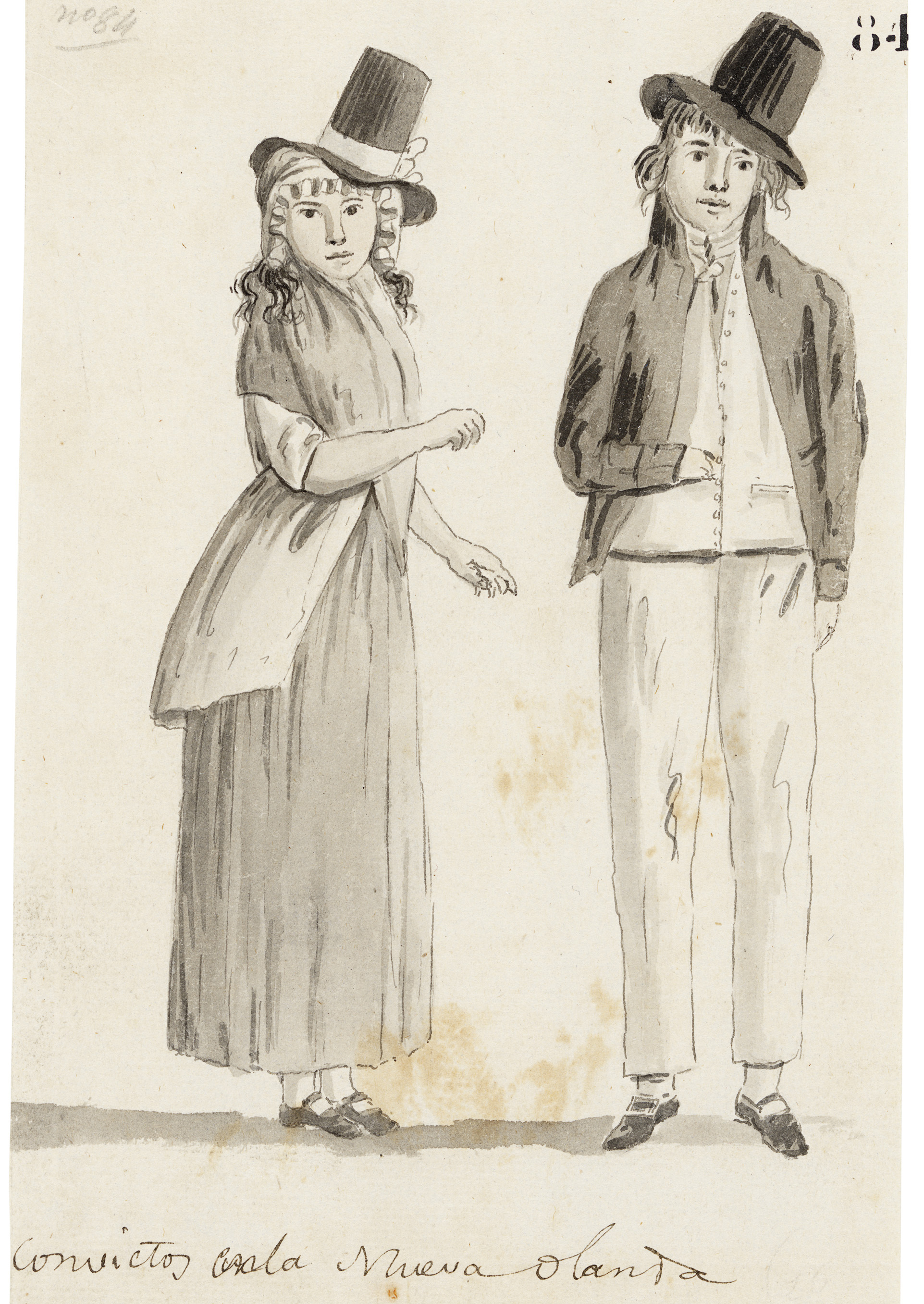 Government Minister Martin Foley, noted Senior Wurundjeri Elder Joy Murphy-Wandin, when offering a warm ‘welcome to country’ to those present at the preview, ‘… gives the indigenous community in Victoria 110% support’, she said, ‘he ‘feels what a country should feel’, which is very high praise.

She also said “I am overwhelmed at the magnitude and integrity of this display: such work and vision is a credit to the curatorial team. The NGV is to be congratulated for providing a visual truth that will enable the public to see, and hopefully understand, First Peoples’ heartache, pain and anger. 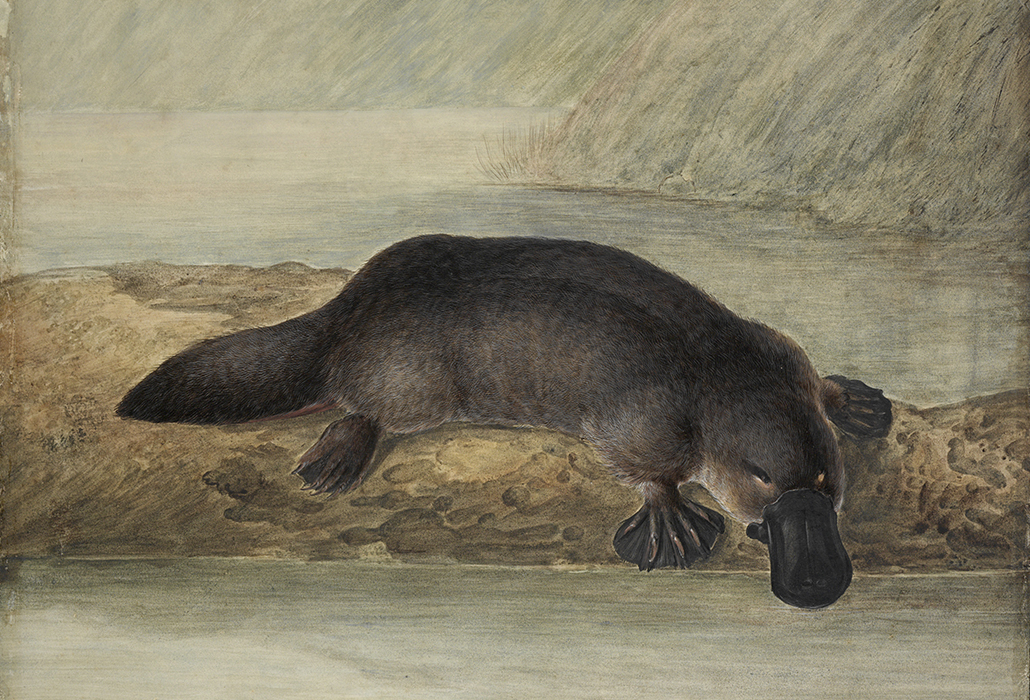 Colony: Australia 1770–1861 and Colony: Frontier Wars is a must see for all if we are to realise and action true reconciliation”. These two exhibitions provide a splendid opportunity to learn about the evolution of Australian life and discover why we must acknowledge the impact of European settlement on Indigenous communities if we are to continue to move forward together.

I cannot imagine Victorian schools, parents and grandparents will ever have an extraordinary opportunity like this again for a long while, to offer a visually compelling, comprehensive and in-depth examination of Australia’s very complex colonial shared history to children of all ages. 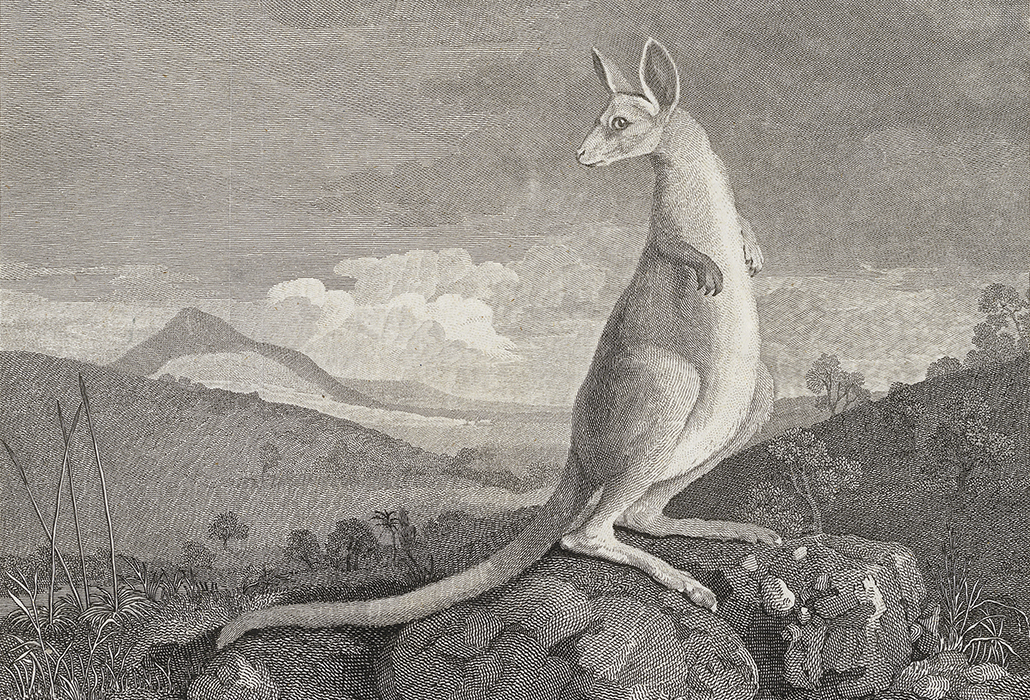 Highlights from the exhibition include objects they can relate to including a ‘cabinet of curiosities’, showcasing the earliest European images of Australian flowers and animals, including the first Western image of a kangaroo.

Examples of early colonial cabinetmaking also feature, including the convict made and decorated Dixson chest containing natural history specimens, as well as a rarely seen panorama of Melbourne in 1841. 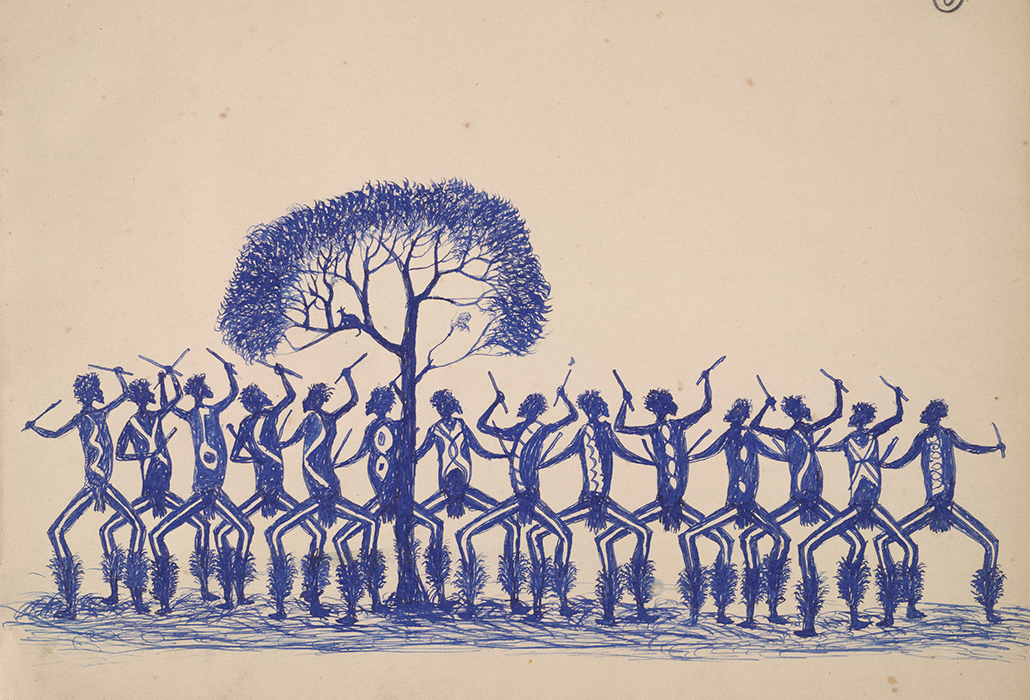 From the 1850s onwards, Aboriginal people across Australia were removed from their communities under various colonial policies and relocated to missions and government reserves. 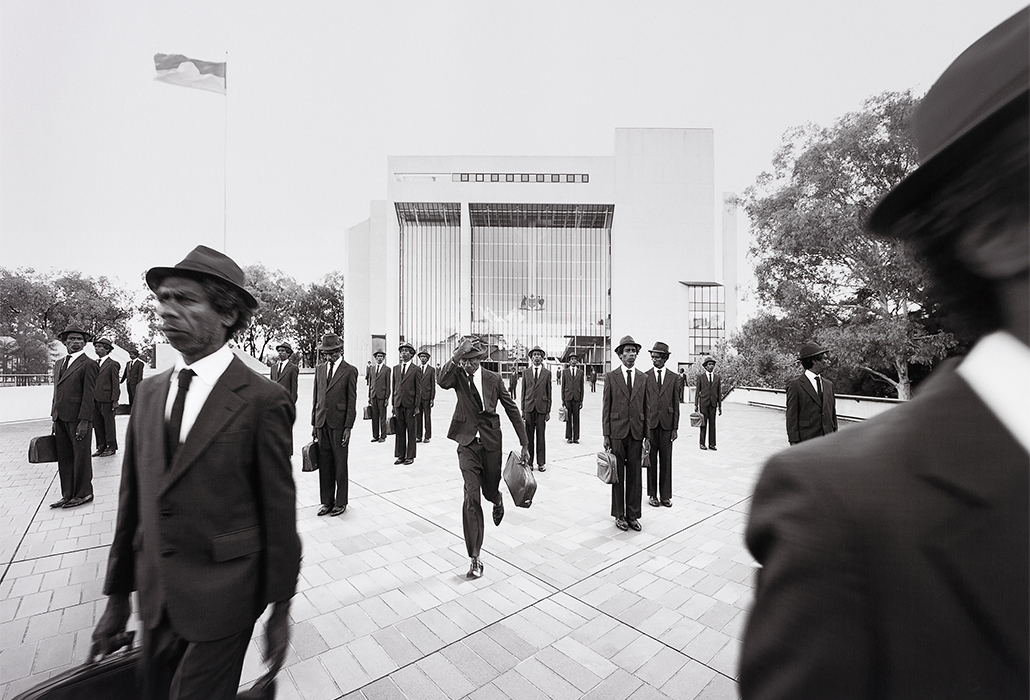 Having already lost their lands and waterways post European settlement, Aboriginal people faced policies of removal, implemented to assimilate Aboriginal people into settler society, and protect them from frontier violence.

Michael Cook’s comment on ‘majority rule’ where he poses the question: What if Indigenous people were 96 percent of the Australian population and non-Indigenous people defined as the four percent… is very telling. 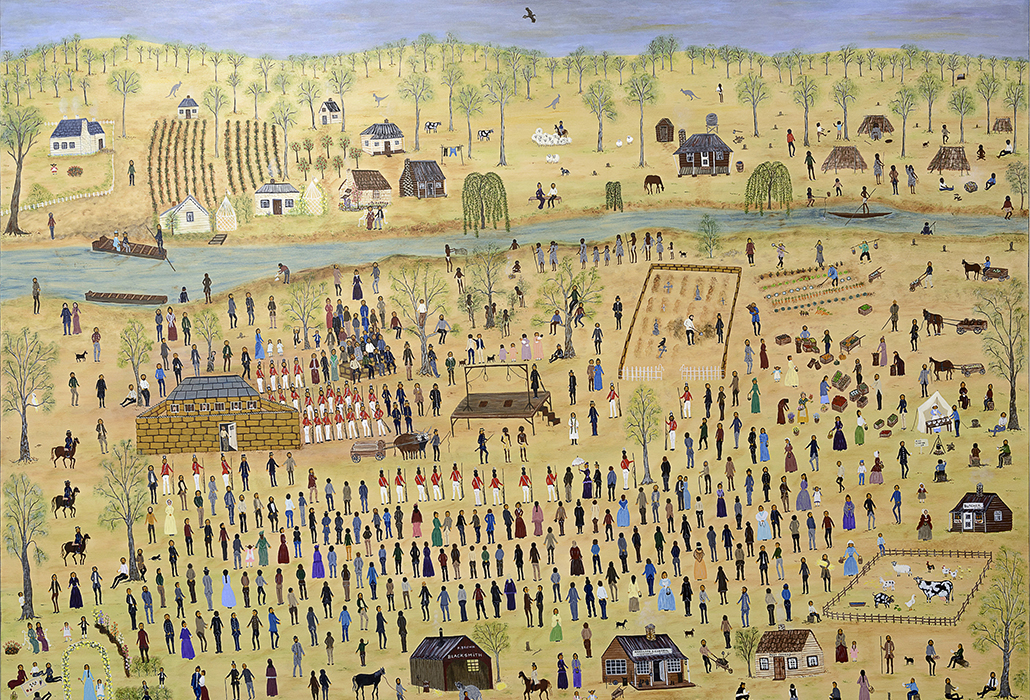 These two shows are also about us all embracing the emotions inherent to, and an integral part of, cultural change so that we can understand how and why we need to continue to offer each other a helping hand. Many of the items on view deserve a story of their own, they have so much to say. Guess I will have to go back again soon. 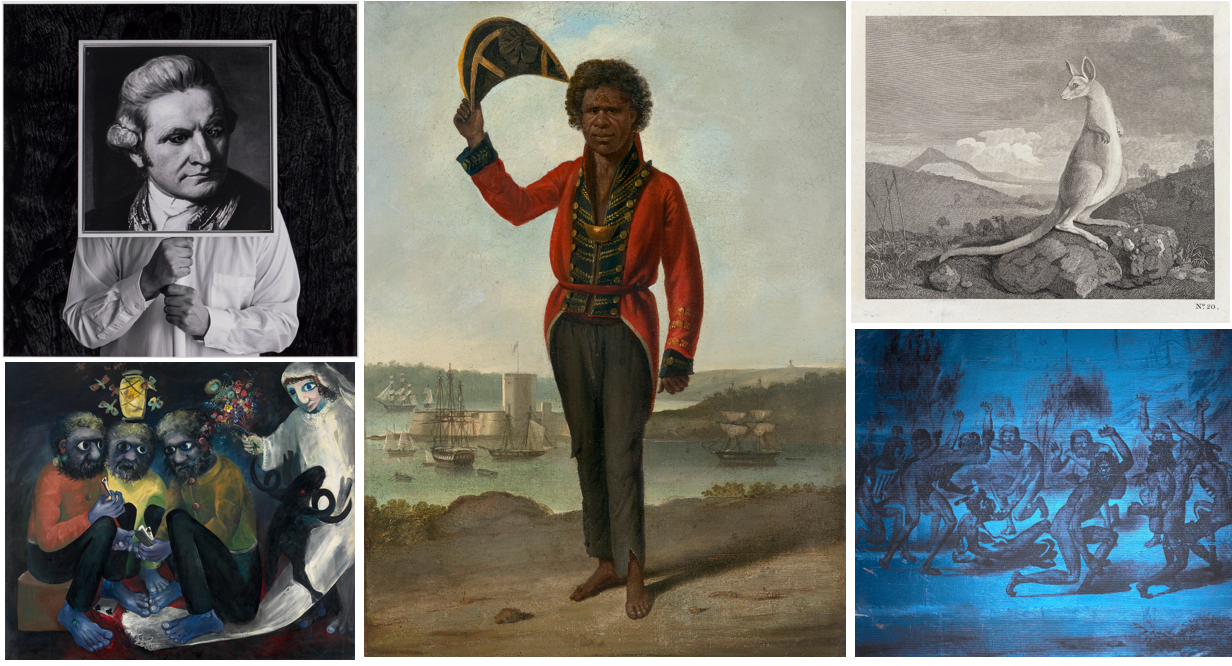 Did you go crazy when Chloe released the “Paddington” or Fendi launched the “Baguette”. What about the “Lady Dior”? Do you covet the Chanel “2.55”, or is your ultimate dream the Hermes “Kelly”? If you just finished reading that, and have no idea what I am on about, then you…