Making a dwelling from mudstone gathered from the banks of the local river in time for the house to be ready for a grand social gathering would have been a vision most people of their age and status during the first half of the 19th century, would have found difficult to grasp.

Edward and Jessie Williams however were no ordinary couple. He had studied law in England and been called to the Bar in 1833 while she had grown up in the natural beauty of the landscape of the northern land of Scotland.

They were planning a grand party at home on 18th December 1847. Star Wars on Lake Como… a place to meet in style

They wanted to share the joys of their new single story dwelling way outside the city limits with friends and family as they celebrated life south of the river Yarra nearby the city of Melbourne.

Their meeting in the first place during a ‘grand tour’ by a lake in the romantic landscape of the north of Italy would be defining.

Many will know Lake Como today, because it was beside its wide wondrous waters a glorious spot was chosen to film the clandestine marriage of Anakin Skywaler and Padmé Amidala in Episode II of Star Wars (2002).

‘…this Lake exceeds anything I ever beheld in beauty, with the exception of the arbutus islands of Killarney. It is long and narrow, and has the appearance of a mighty river winding among the mountains and the forests”, is a wonderful description of Italy’s Lake Como by English romantic poet Percy Bysshe Shelley (1792-1822). All around the lake are situated the most beautiful villas, in the Italian tradition.

Their appeal is far removed from the reality of what became Como House, nearby the banks of the Yarra River in Melbourne and surrounded by volatile Australian bushland.

Gold had been discovered in Victoria in 1851 and with it the life of the nearby Melbourne city and environs, began to change. Como House from the garden today…

Progress meant hotels, theatres, markets and other outlets expanding, giving those people arriving in droves the ability to purchase the latest goods from far and wide.

The Williams had a vision for what they were to achieve with their chosen place to dwell. They also had an active interest in developing a portion of the surrounding bushland into a fashionable garden.

They both assimilated into city life well. He became a member of the local ‘Gentleman’s club. In the same milieu of its matrons Jessie became a woman of influence and style. However by 1852 Mr Williams suffering ill health was forced to sell their beloved Como estate moving back into the town, before eventually removing back to the UK. The Stables of Como Cafe interior…

Frederick Connerman Dalgety, one of the colonies new merchants whose business was rapidly expanding, purchased the property in 1852.

According to a comment he made after moving  ’… life was certainly ‘infernally dull stuck out here alone’. It’s not surprising he sold the estate within a year to Mr John Brown a successful builder, who had become a successful wine and spirit merchant in heady gold boom times

It was in 1855 that Mr Brown began to redevelop the house into the Como House we know today. From then on he was referred to as ‘Como Brown’.

Como is the only heritage house and garden in Australia, run by the The National Trust of Australia (Victoria), that still retains furnishings from 1865. Today one of the best ways to view the exterior of the house and gardens is to enjoy breakfast, brunch or lunch in The Stables of Como Cafe. You can also hire it for your own grand entertainments whether professional or personal. When Brown purchased the Como estate he was looking for a house that would accommodate his wife and their eight children in a style they wanted to become accustomed to.

He would find out however that just living in the same house as the accepted founders wouldn’t guarantee him the same acceptance, especially in Melbourne’s privileged establishment society.

Australian matrons of the time were intent on not letting anyone in ‘trade’ rise about their station or join their ranks. For Brown the lack of acceptance as a member of the Melbourne Club must have been a blow to both his pride and vision.

Upper class attitudes in Australian cities way past the middle of the 20th century were hard. Many woman at home fell victim to gossip or innuendo if she or her husband weren’t considered quite the ticket by those in society!

Mr Brown busied himself in business and his new idyll, adding a second storey to Como House, also using hand made bricks. Into his grand design vision he incorporated a ballroom, certainly de riguer for anyone aspiring to achieve social status in the Melbourne of his day.

With the addition of a grand staircase, the latest industrial revolution wonder wrought iron entered the mix of materials that would fashion Como eventually into one of the most stylish sought after houses to visit in the colony.

Brown and his wife were determined to create their own world and so no expense was spared in developing the house, its interiors and gardens. They were advocates for, and supporters of the restrained neoclassical design style that swept Europe, England and America during the age of ‘Enlightenment’. Scholars declare Como’s style as ‘restrained Regency, an important distinction. The Regency style is usually associated with the flamboyance of George, Prince of Wales, and the Prince Regent of England. Its extravagance on the exterior in England was kept in order or ‘control’ by the Prince’s renowned architects, Henry Holland (1745-1806) and John Nash (1752- 1835).

The addition of the regulated rhythm of well proportion sash windows as well as its wide verandah’s were defined by the addition of wrought iron railings and columns. They were surmounted by a simple entablature with classical urns, giving Como a charm that captivates as you encounter it for the first time. Many visits over the years means that it has become like a familiar friend for me, one welcoming in its intent, reflecting its unpretentious owners who gave it a warm inviting identity of its own.

No expense was spared, especially on developing the glorious gardens that surrounded the house. The latest technology including the connection of gas in 1855 and a water system for hot and cold running water in the 1860’s bringing it into the new age.

The whole idea of upstairs and downstairs was alive and well at Como House where family life supported a large staff helping to ensure that the Brown’s family life ran smoothly and the grand entertainments was second to none.

Guests on arriving via the great gates and gate lodge came upon a driveway described as ‘one of the finest of the kind in the colony’.

As was normal in those days, the kitchen was built separately from the house in case of fire, with a butler and housekeeper’s pantries and a wine cellar. The Browns eventually became well known in the colony for their warm hospitality. 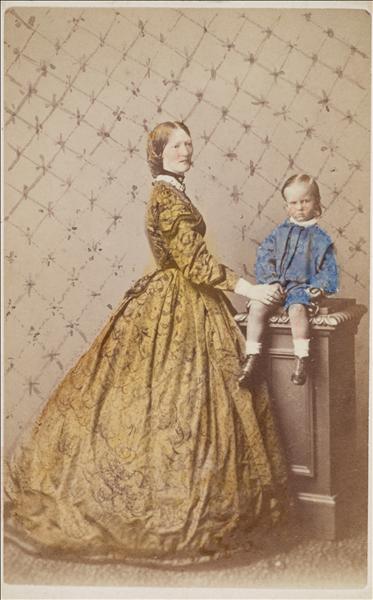 All ran well until 1864 when it was reported in the ‘Argus’ on the 6th December 1864 that wealthy pastoralist ‘Mr Charles Henry Armytage’ would become Como’s new owner and the garden ‘…unsurpassed in the colony…’ would be welcoming new children to play in it’.

It is the Armytage solid oak furniture that remains at Como today, representing the time when Charles and his wife Caroline and nine children settled permanently, extending and managing the estate.

They were fashionable people with an ascending star, one favoured in Melbourne circles, particularly with the now established horse racing society.

They also competed additions to the ballroom and the children’s bedrooms. Caroline managed the estate when her husband died aged only 52 years of age of a pancreatic disorder.

It was kept in trust for her, and at her disposal, unless she re-married. From 1876 until she passed away Caroline and her women descendants managed it well.

Upon her death a great deal of the land was subdivided and auctioned off in 1911, losing much of the William Sangster designed colonial gardens.

Pre-eminent in the colony, Sangster had originally transformed the 54-acre estate from bushland into a vision of the very popular ‘picturesque garden style’, which he managed for both the Brown and Armytage families.

World War 1 changed life for the women of the Armytage family. They had to adjust to not only societies changed values, but also changes to its social structure. In 1921 a further 35 acres was sold off to the local council to create Como Park.

With the proceeds the family managed to retain living a fashionable life, although without the grand entertainments as before.

During the 1950’s as other houses were being felled furiously the eldest of the Armytage sisters horrified at what was happening met with friends and colleagues of the newly founded National Trust group.

They were fighting to save Melbourne cities heritage and so the Armytages sold their Como Estate to the National Trust so that it would be preserved for the nation.

The National Trust of Australia (Victoria) inherited a responsibility with Como House and Garden, preserving the past to secure a future for generations to come.

Today its continual preservation is an important part of societies commitment to honouring the patriotism, heritage and history of the Australian people.

The Stables at Como Cafe

The V&A at London and the Royal Opera House present a landmark exhibition starting on September 30, 2017 relating the story of Opera, the music of love and life