Family life is a bit like baking a cake; a whole lot of ingredients get mixed together and sometimes there’s a good outcome.

The success or failure of a cake recipe, though doesn’t have the power to change your life, family relationships do.

Growing up in a loving family where parents stay together through thick and thin, particularly the thin, really helps the transition from childhood dependency to adult self determination.

Nancy Spiller, in her memoir Compromise Cake, uses recipes, learned at her mother’s side, to lay to rest the mystery of why her mother’s life became an unhappy diet of compromise and angry despair.

She followed most women of the times (‘forties through ‘sixties) taking the career option of: marriage and a family.

The compromises were gradual at first. Ms Spiller’s mother, Marguerite, came to realize that with a husband and four children a freedom cake flavoured by self-expression and happiness was something she could dream about but never taste. This realization was not unusual for Marguerite’s generation or indeed any women whose rosy expectations of marriage founder somewhere between a rock and a hard place. Most women, and men too, overcome the trials and tribulations of keeping a family together by compromise on both sides to provide a haven of happy normalcy for their children.

Marguerite was unable to do this, understandable, as the snapshots recorded in Compromise Cake of her life before marriage reveal a young woman desperate for ‘something to happen’ and to meet ‘an exciting man’.

While waiting for these events, she trained as a teacher, a job she didn’t like. She met an ordinary young man, who after courting Marguerite, proposed marriage.

The ‘something happening’ or ‘exciting man’ dragging their respective feet.

Marguerite accepted the proposal. It’s never a good idea to accept second best and for Nancy Spiller’s family it was a disaster.

By the time, Nancy (the youngest of four) was born her parent’s marriage was shaky.

In this well written memoir of life in Northern California in the 1960’s, Nancy Spiller explores her childhood and later adult relationship with her mother.

The narration moves backward and forward in time as the author is aided by saved letters, newspaper clippings and handwritten recipes. She is trying to understand the cause of her mother’s enduring unhappiness and the complex personality that was Marguerite. After all she was an accomplished cook who provided family meals and desserts in abundance, although she was also a mother often withdrawn with barely suppressed anger.

Seen through the eyes of Nancy, the child, scenes from family life are recalled and are more or less happy. The author comments that if this is the only life you know, then as a child you accept it as normal and are grateful for brief moments of happiness. Written in an anecdotal style, the account of young Nancy’s often sad and lonely life, largely ignored by a mother she tries hard to please, takes a turn for the worse when at age nine, her parents divorce.

Nancy and her siblings are left in the care of an alienated mother who forsakes friends and family to begin a downward spiral.

Despite withdrawal from her children, Marguerite still cooks for them, preparing dishes before disappearing into her bedroom.

Unlike her siblings, Nancy, desperate to preserve the only connection she has with her mother; a shared interest in recipes, eats the cholesterol laden offerings.

She becomes (in her own words) ‘chubby’.

Every chapter of the book is illustrated and linked to Marguerite’s recipes.

Preparation is described in delicious detail but regular eating of these mouthwaterer’s wouldn’t make you chubby but with lashings of lard and sugar, decidedly fat.

Nancy Spiller recounts her struggle to overcome destructive behaviour in her adult life but does not give intimate details of her parent’s marriage breakup or Marguerite’s mental illness.

She provides only glimpses of her father’s life thereafter. It is a testament to the quality of her writing that I would really like to know more about these events to understand why, as a child, she was left in the care of a seriously ill mother.

Since writing this review I have learned that Nancy’s debut autobiographical novel, Entertaining Disasters, does include more on her mother’s illness and parent’s marriage breakdown so have added it to my reading list.

A writer, artist and UCLA Extension Writers’ Program Instructor living on the wild western edge of Los Angeles, Nancy Spiller found time in her busy day to reply to my questions about Compromise Cake.

The answers add a refreshingly frank, wise footnote to her book.

Q1. Has researching/writing Compromise Cake helped you better understand your mother’s early life and why she failed to find happiness as a wife and mother?

In writing the book, I came to see my mother’s mental collapse resulted in part from being forced to pursue the conventional woman’s path of marriage and children.

Mental illness can spring from the conflicted mind’s response to an impossible situation, that was my experience in my late 20s, and that’s what happened to my mother, after marriage and motherhood.

According to the diary she wrote in her 17th year, she wanted a life of independence, excitement, and autonomy, but felt pressured to marry and have children. The best she could do was put off this miserable fate until she’d graduated college and taught a year of school.

She didn’t feel free to make those fundamental, profound choices in her life.

The results of being a good girl and doing what others pressured her to do were tragic—mental collapse, divorce, and what was really a kind of living death as she abandoned her life and life abandoned her to a huge degree.

In researching the book, I was shocked by how the women’s magazines of the time, Ladies Home Journal, McCall’s and Redbook, infantilized women.

They blithely told readers what to think and even questioned whether they were capable of thinking.

Also, for this book, I read Betty Friedan’s The Feminine Mystique for the first time.

I hadn’t read it before because it was published in 1962 and I came of age in the 70s, so I thought those issues had all been taken care of, we’d been liberated.

But a raised consciousness doesn’t automatically translate to clear thinking and transformative action. There are inherited attitudes and social conventions that are passed on through the generations preventing us from doing what we truly desire.

My pre-Feminine Mystique good girl mother never had a chance.

Q2. You have a love/hate relationship with cooking – loving the execution of the recipes but maddened by the taxing and often disappointing efforts at sharing with others. Does this connect to baking sessions with your mother? 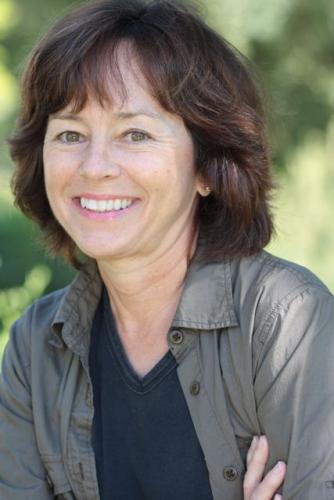 Yes–I love to cook and the theoretical concept of sharing with others, but I’m socially challenged when it comes to enjoying my guests.

And if I could find another way to connect with people other than killing myself in the kitchen, that would be good, too. The reality is, I’m more comfortable on the page than on the plate. I wrote about this torment in my autobiographical novel, Entertaining Disasters.

For years I would perform ritual self-sacrifice doing a dinner party and by the time people arrived I’d want to throw them off the deck. The only way to overcome the lingering horror of the actual event was to do another one. It was Sisyphean.

This does go back to my kitchen sessions with my mother, because while she gave me the keys to the cooking kingdom, a way to take care of myself and others by making something out of nothing in the kitchen, there wasn’t much comfort to be found at the table in my chaotic family.

I’ve spent far too much of my life trying to enjoy the company of others. It took writing the novel to get a grip on this abusive urge to entertain and writing the memoir to appreciate the good that I had gotten from my troubled mother and better understand the well from which her troubles sprang.

I also came to realize the extent to which I’d been compromised by my mother’s misery and how far too many needy parents compromise their children with similarly crippling emotional shackles.

Q3. Is baking something you will always do and what’s upcoming for you?

My fruitcake has too big a following to quit making it now.

Even though it’s a multi-day project, gathering ingredients, making, baking, wrapping, shipping out, et al, I’d still rather do it than bush whack my way through the retail wilds in search of other gifts.

And I’ll always make piecrusts, as my mother taught me to do, not because they are the Platonic Ideal of what a pie crust should be, but because I am blessed with fearlessness when making them and no one’s ever complained about the results.

Then there’s the Persimmon Pudding discovered in writing the book that’s so simple and good that it’s become a habit for the fall holidays.

So yes, I’m sure I’ll always bake, but never as much as I did as a child.

After doing all the baking I did for the book, I realized the degree to which I have a sensitivity to sugar, how it can send me on an emotional rollercoaster, and that I have to be careful how much I consume.

But that’s another of the reasons I really like the mid-Century and heirloom recipes I’ve featured in the book, they’re far less sugar saturated than the cakes and cookies we’ve become accustomed to today.

What’s next for me is a third book, an historical novel based on a true story, set in Los Angeles in the early 20th Century, with a possible food element, but no recipes.

Gary Shteyngart (Super Sad True Love Story, Little Failure) just blurbed it. According to Gary, it’s going to be a fantastic, so now all I’ve got to do is write it! 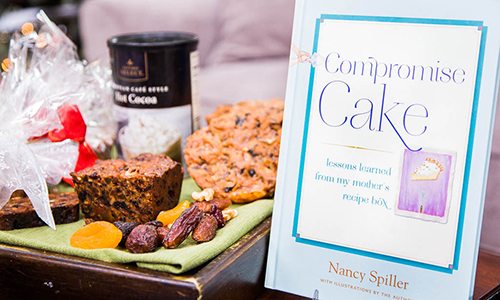 Compromise Cake is a touching realistically written portrayal of family life that has gone badly wrong and the suffering that the mental illness of a parent can inflict on children – a book to read and savour.

Watch An Interview with the Author

That the first two Hanoverian Georges disliked England was neither here nor there. George 1 calmed Hanoverian fears of the English chopping off his head by saying ‘I have nothing to fear – for the king killers are all my friends’. When George II succeeded in 1727 visiting Swiss Protestant,…