A must see show for people living in, or visiting London, is the very special exhibition of painter John Constable’s landmark landscape works. It is on display now at the Victoria and Albert (V&A) Museum at London until 11th January 2015.

The major film about Mr. Turner, which won best actor category at the Cannes Film Festival 2014 for English actor Timothy Spall will be a Xmas treat and features James Fleet as his rival John Constable

Curated by Mark Evans, Constable: The Making of a Master will showcase over 150+ of this much-loved artist’s well known and admired works of art, including oil sketches, drawings, watercolours and engravings.

Then there are three sketchbooks, given by his last surviving daughter Isabel to the museum in 1888, an invaluable resource for imagery and information.

Evans together with Susan Owens and Stephen Calloway has also produced an accompanying publication. Installation of Constable: The Making of a Master © Victoria and Albert Museum, London

The exhibition will showcase a previously unknown oil sketch by Constable, discovered in the V & A’s permanent collection recently.

It had been concealed inside a line canvas, having been painted on the reverse side of his Branch Hill Pond: Hampstead (1821-22).

‘… the purpose of studying masters is to understand the great principles, which the work embodies. Consider the works only as a means of teaching one the art of seeing nature’.

The Royal Academy of Arts was considered the primary art institution and the leading venue for the study and display of art in Great Britain and Europe until at least the beginning of the 20th century and Reynolds’s opinions remained important and influential in Constable’s day.

There will be many whose form and subject will be sure to be recognised, perhaps even personal favourites, that were produced when he was painting en plain air.

This was when he was taking his inspiration from nature directly, endeavouring to capture and record its bold transitory elements of both light and ambiance. The selection will include some of Constable’s most well known paintings – Salisbury Cathedral from the Meadows (1831), The Cornfield (1826) and The Hay Wain (1821).

All through the nineteenth century those who viewed Constable’s romantic viewpoint of the nature of England embraced it wholeheartedly.

What was not to like, after all it was all about a country idyll, even if the temples to taste were missing

Many of his landscapes while not emulating the ‘Arcadian Idyll’ are now considered classics: of renowned excellence although very different than what had gone before.

His was a view of England the majority of people took to their heart. Constable had been schooled by meticulously copying the works of the old masters, reflecting both on their techniques and styles. Constable was the second son of a farmer and mill owner from Suffolk and had been sketching his observations of nature and the scenery of the Suffolk countryside around the River Stour when working in the family business.

Clearly impressed, his father allowed him to travel to London in 1799 to study at the already famous Royal Academy of Arts.

Paintings such as Moonlight Landscape by Flemish baroque genius Peter Paul Rubens (1577-1640) and Landscape with a Pool by England’s 18th century giant Thomas Gainsborough (1727-1788) were inspiring to his early technique development.

Like others before and after him, Constable would also embrace the viewpoint of the famous French artist of ‘classical landscape’ Claude Lorraine (1600 – 1682), as well as Herman van Swanevelt (c1600 – 1665) and Alexander Cozens (1717-1786), learning from their fine examples.

For the first time in this show some of their works will also be shown alongside Constable’s direct copies. The show will also feature 5000 + etchings by some of the old masters such as Rembrandt von Rijn and Albrecht Dürer, which were a vital resource for Constable when he was painting, driving his imagination, inspiring his perceptions of form and harmony.

They were an integral aspect of his own collection of art, Then there will be mezzotints, a printmaking process produced for him by engraver David Lucas, which ensured that many an English home would be able to enjoy having a wonderful ‘Constable’ on their walls, not only spreading his reputation but also ensuring his legacy that was helped by his works appearing on ‘chocolate’ boxes Study of the Truck of an Elm Tree, oil on paper, John Constable c.1824 © Victoria and Albert Museum, London

Interestingly this ‘populace’ act has not really damaged his reputation one iota, such was his skill and ingenuity. His use of bold brushstrokes and his rare ability to capture with great ‘freshness’ the scene he was recording endeared Constable and his works to popular taste not only during his day but also until today.

While he challenged conventions during his day, Constable impressed everyone with his perceptive refinement of taste and the ease of his way of working. He produced results everyone wanted to see.

His work was indeed ‘poetic’ and no doubt it helped inspire the all new art of the picturesque, which flowed over into gardens when taken up and forward by such as Humphrey Repton.

Constable by providing his own unique perspective on life and projecting how man could live it in harmony with nature albeit beautifully, captured and held the public captivated for more than a century.

His was a rich and noble aesthetic, one that appealed and pleased the senses, expressing much more than painted landscapes until his arrival on the scene had done in the past. They were grandly delivered from a country man’s viewpoint, a man who knew what it meant to be as one with nature and had his hands in the earth. 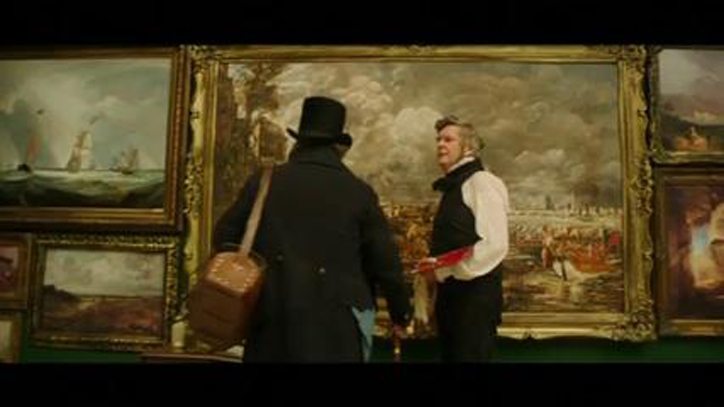 James Fleet as John Constable with Timothy Spall as JWM Turner (back turned) in the movie Mr. Turner 2014 This is what appealed to people everywhere; his rare ability to raise them up to meet his impressions of an ideal country life, one in they would feel comfortable living and working within.

This was a country life much like the ideal of rural life as depicted in ancient Roman literature so popular during the eighteenth and nineteenth centuries in upper class circles and literary life, but one suited to its own place and time.

Constable’s images had a dreamlike quality, and as the Industrial Revolution and its ugly destruction of the English countryside progressed during the nineteenth century, and long after Constable had passed on, his works were only admired more.

By the end of the nineteenth century in industrial towns all over England the people would yearn for times past, longing to go back to the time where Constable had revealed to them that beauty, man and nature could not only be integral to life, but also enhance it.

The late 19th century Arts & Crafts movement so integral to the age of modernity would be inspired by such an ideal when inventing the new age.

John Constable and his artistic legacy undoubtedly has remained hugely influential right through to our present day.

Constable: The Making of A Master

V & A Museum at London

Taking place simultaneously from Warwick to Weipa in towns and cities all over Queensland from July 17 to August 2 the concerts of contrast presented at the Queensland Music Festival will be sure to enhance and change many lives as it contributes to national life, community well being and the…