The Orange region in the countryside of New South Wales in Australia is a destination for those who savour fresh produce, extraordinary wines, the buzz of hip dinning and a strong changing and evolving café culture.

It is a spectacular rural landscape, an exciting and unique starting point for food and wine experiences and offers a diverse range of accommodation styles.

On a recent weekend escape we were thrilled to stay in a gorgeously renovated heritage three bedroom cottage adjacent to Cook Park.

Nostalgic memories of the uncomplicated charms parks have to offer swept over me as I ambled along the gravel tracks in the Park.

Ahead the ponds supported a haven for the ducks as they waddled along the banks and glided gracefully on the water. The arched bridge between the two water expanses was a source of pleasure for the children and toddlers as they squealed and giggled in delight criss-crossing the bridge and chasing the ducks. 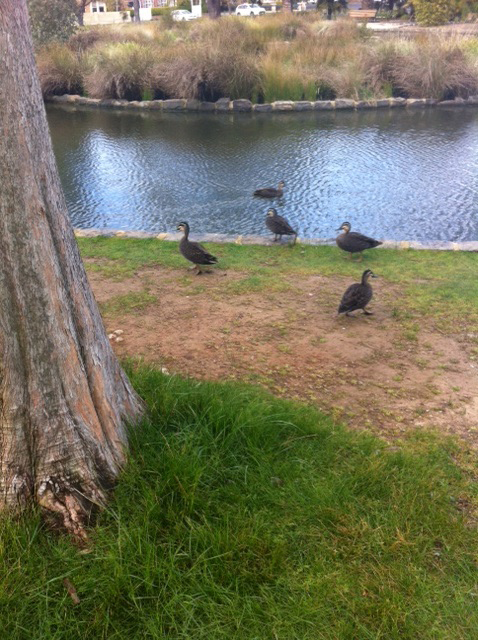 These ponds had been redeveloped in 2011 and provided a habitat for Wood Ducks, Black Pacific Ducks, Turtles, Shags and Ibis.

Families frolicked and picnicked on the nearby tables. The to and fro movement of the swings had children enthralled by the sensation.

They offered a source of amusement and happiness, while the children’s laughter was contagious as the joy of reaching the sky was mesmerizing.

Meandering through the Park and discovering the sunken rose garden reached by four arched stairways that led to a centrally located sundial was charming.

This section of the Park was built in memory of Frank J Mulholland, Town Clerk from 1895 to 1935 and is known as the Frank Mulholland Memorial Garden. It was officially opened in 1938.

Clumps of yellow and cream daffodils were scattered throughout the park adding colour and expressing the sentiments of spring. The exquisite poetry of William Wordsworth tumbled into mind.

‘I wandered lonely as a cloud
That floats on high o’er vales and hills,
When all at once I saw a crowd,
A host, of golden daffodils:
Beside the lake, beneath the trees,
Fluttering and dancing in the breeze.’

Wandering down the avenue of Elm Trees time trickled away to reveal the beauty and majesty of ancient trees.

The sturdy strength of tree trunks, the shady spread of branches and the tilt and fall of leaves swept a soothing sensation over me.

The Bandstand stood beyond another corridor of trees. It was officially opened in 1908.

This well-designed structure was encircled with a very simple garden.

The flowerbed surrounding the Bandstand was modest but very effective with a single row of curly parsley hugging the rock boarder and a row of pansies hovering behind. The lime green of the parsley contrasted with the yellow, purple and sky blue heads of the bobbing pansies. The scene would only have been surpassed in autumn when the kaleidoscope of changing colours was ablaze.

Much further on the fernery that was built between 1937 and 1938 and restored in 1988 as part of a bicentennial project waited inspection.

The fernery contained varied ferns and other shade loving plants including Aspidistras and rows of potted Begonias.

The first begonias in Cook Park were donated by the City of Ballarat.

Sauntering onwards towards the aviary where I discovered that the original aviary was donated by Dr Wally Matthews, Mayor of Orange between 1936 – 1944 and again 1948 – 1950. In 1995 the aviary was enlarged to its present size.

The diamond Dove the smallest bird belonging to the pigeon and dove group soared and hovered.

While the Cockatiel, distantly related to cockatoos and like them had a crest perched contentedly on a branch. A very endearing feature of the Park was Bastick Cottage home to the Park Guildry and operating as an arts and craft shop.

Originally it was built in 1887 at a cost of 185 pounds as the Caretakers Cottage.

It was named Bastick Cottage to honour two former Parks and Gardens Supervisors who, between father and son gave ninety years of service to Orange.

When it became vacant in 1973 it was developed as a venue in the district for displaying, promoting and selling of Arts and Crafts.

It is strongly a community project and is run on a voluntary roster system by the members of the Guildry. The Committee consists of twelve members each representing a different Arts and Crafts group in the district.

Searching through an assorted range of hand-made objects was like rummaging through a treasure chest of unexpected gems.

Beautiful wooden pieces, sewn and knitted garments and toys, and delicious jams, relishes, cakes and biscuits were beckoning buyers. It offered all the fun and possibilities of a fair.

Indeed Cook Park held the magic of by gone days and is freely available to everyone every day of the year.

The old fashioned simplicity of roaming and enjoying a beautiful Park is difficult to match.

A rare neoclassical style vase by Luigi Valadier,18th century Roman silversmith will go on show at The Frick Collection, NY, 31 October through 20 January 2019