When I think of cool Britannia, I immediately envisage The Rolling Stones.

Having just celebrated their 50th anniversary from their first gig (not the line up we see today), Keith, Mick and the boys obviously have the “cool” factor. It has helped them survive and thrive in the fickle industry that is music.

With beginnings in blues, they soon forged their own “lock up your daughters” style.

If parents were worried about the effects of The Beatles on their kids, the Stones most certainly provided a one way ticket to damnation. Perfect for selling records!

Kids love what adults loathe, and this band was a perfect example of how record companies work this theory in their favour. Fronted by one Michael Jagger, his androgynous pretty boy looks were an instant hit. All lanky legs, arms and pillowy pout, he is the perfect clothes horse. Even today at 69 he still cuts a fine figure, on stage and off.

Just recently and daughter Jade’s wedding, he rocked a vibrant violet suit and looked fantastic! While his ex-wife Bianca looked like a Sicilian widow in the same shot (she could have at least smiled)! Anyhow, marvellous Mick gave us all something to admire.

He still comes across as a naughty school boy and I guess that’s his charm. After all, he is the man who stole Jerry Hall from Bryan Ferry!

At the other end of the spectrum is Keith Richards. 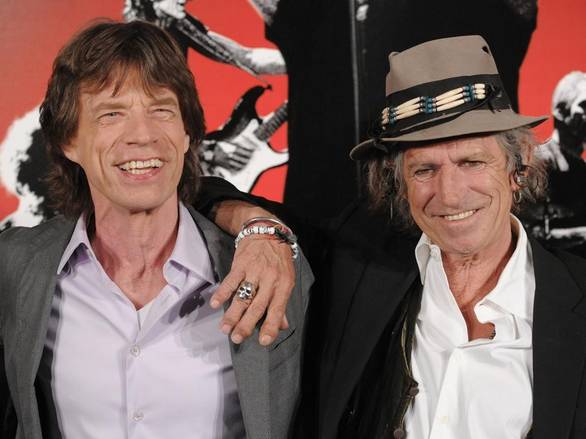 This is the man who picked up his new born son Marlon (named after Marlon Brando) and then partner Anita Pallenberg, from hospital in a blue Bentley.

Dressed in a floral shirt, black velvet trousers with silver studded seams, and brown snakeskin boots, daddy doesn’t get any cooler than that!

On the same day,  August 10th”Honky Tonk Women” went to number one in the USA. Best man at Mick and Bianca’s wedding, he arrived 45 minutes late dressed in black braided tights and a green combat jacket, fantastic! Only Richards could get away with this ensemble.

Low slung hipsters, skulls, leather and scarves are all part of his signature style. Bohemian chic all the way. He also rocks some amazing jewellery. Cuffs, rings and chains all add to the look. To quote Ian Hunter from 60’s band Mott the Hoople, “Keith Richards is to me everything, visually, that rock’n’roll is about. The clothes, the teeth…everything.” Let’s face it, he is lucky he’s still standing, but he is still the coolest thing on two legs.

It’s no wonder Johnny Depp channeled his style to bring to life the character “Jack Sparrow” in the “Pirates of the Carribean” series.

So the Glimmer Twins (as Mick and Keith are known) have greatly influenced rock stars of today, not just in music, but with their style too.

Just check out Rock’n’Roll Circus, the hour long movie made in 1968.

Mick could easily be any indie band member of today. It’s that sexy swagger and nonchalance that always gets pulses racing.

And these two have produced some pretty hip offspring. All girls have had modelling gigs and one DJ’s. I’m sure they all raid their fathers closets at one stage or another. 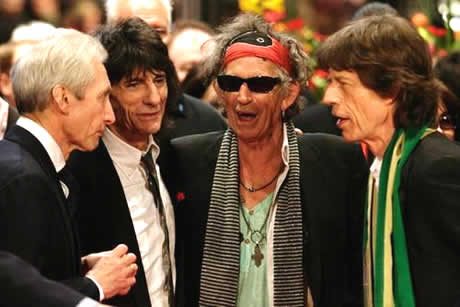 Could you just imagine the amazing gear they would have archived!? I so want to see inside those wardrobes!!

Fast forward to 2012, the boys pull even bigger crowds than ever and travel with an entourage that’s just as large. Has much changed since the 60’s?

Not really, the clothes are still cool. The men in them are decades older, in body, but definitely not in spirit!

The music transcends time and I challenge any rock artist that says they haven’t been slightly influenced by The Rolling Stones.

I know it’s only rock’n’roll, but I like it!

The Art of Botanical Illustration Exhibition is on now in the Domain Gallery at the Royal Botanic Gardens (RBG) until November 9, 2014, South Yarra in Melbourne