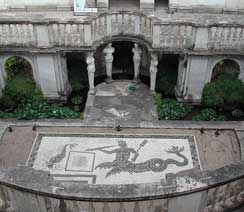 At the Medici villa at Castello near Florence, the garden was described by painter, writer, historian and architect Giorgio Vasari (1511-1574) as the ‘most rich, magnificent and ornamental garden in Europe’. The allegorical scheme was expressed by the use of statues. Its magnificence was expressed through the introduction of ingenious water games. They may seem childish to us today, but caused great delight throughout the sixteenth and seventeenth centuries. In 1550 at the Villa Giulia for Pope Julius III Vasari had a hand in its design. He was replaced by Vignola when he had disagreed with the Pope about another architect, Bartolomeo Ammanati completing the project. It had an elaborate hydraulic network to pipe water uphill from the Acqua Vergine spring. This view shows the paving and mosaic marine deities and caryatids that supported the first floor courtyard where river gods languished dispensing fruit from a cornucopia, or horn of plenty.

The Abbot Suger at St. Denis near Paris developed the Early Gothic style of architecture from 1137. It was a system of great structural ingenuity and Suger is attributed with inventing the pointed arch and pioneering the use of glass in a high range of clerestory windows to the south…