‘I am interested in the space between the macro and micro and the different perspectives this space affords us, if we are game to step outside ourselves…‘* Ad Infinitum - Oil on linen 50 x 50 cm by Kathryn Brimblecombe-Fox - Ad infinitum is a Latin phrase meaning without end, without limit, never ending, to infinity - courtesy of the Artist

Cosmology, a show by Brisbane based artist Kathryn Brimblecombe-Fox explores the boundaries of experience and beyond, the great expanse that exists if we leave earth far behind. Cosmology will open on Wednesday January 30 at the Purgatory Artspace in North Melbourne and continue until Saturday 16th February. Kathryn says about the show “with the multi-perspectives revealed by contemporary cosmological research, I suggest that ‘landscape’ is something more than what is here in front of us.” She also notes that while ‘earth may be our home’… ‘the Universe is our environment’. If we are at all convinced by her message then surely we must stop trashing it!

Kathryn Brimblecombe – Fox is an artist confidently charting new territories because she has a passion and knowledge of the past and a purpose in life that allows her to feel free and remain open to all possibilities. It’s a trait and a characteristic to be much admired and respected, one we would all wish to embrace in our own life journey. She has faith that there is a future, one that while it may not yet seem ideal, will be forged in the fires of us learning from our past mistakes so that we can provide a solid foundation for future generations to build upon. 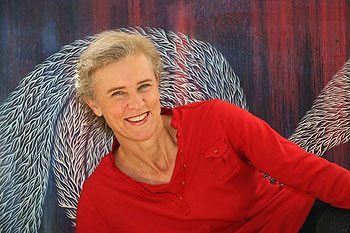 Kathryn Brimblecombe-Fox explores within the boundaries of her own experience and beyond as she seeks to understand her own, and our place in the universe. The Tree of Life has special meaning for her in a deeply spiritual, literal and metaphorical context.

From the beginning all over our world trees supplied an abundance of beauty, refuge, warmth, shelter and food for all the creatures of nature, including humans. They should always respect the role they have had to play. Trees shed bark and leaves for compost helping make other things grow and as they transformed with each passing season, so is the world around them and the people in it. 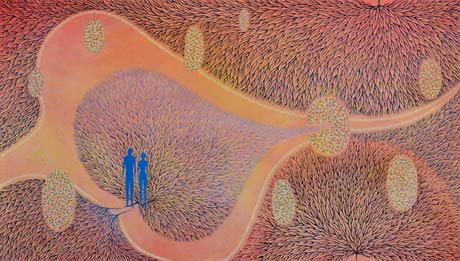 Eternity's Breath - Oil on linen 85 x 150cm 2012 by Kathryn Brimblecombe-Fox - The trees represent variously, all history, geneology, human race evolution, but they also 'speak' of the viscera of existence...eternity. The trees evoke the appearance of lungs and the rhythmic movement of breath...inhale and exhale, inhale and exhale - image courtesy Artist

Kathryn understands that while the tree of life may have started out as a real tree, in the here and now it has in fact evolved and has symbolically taken on a whole new meaning. The tree of life now needs to travel further than ever before, reaching out its branches toward new horizons as it helps us all to take the next giant leap for humankind – into the unknown – the Cosmos.

In her artist’s statement about the forthcoming exhibition Kathryn says; ‘the tree-of-life evokes concepts of systems, all types of systems; vascular, water, cross sections of internal organs, invisible energies driving universal forces and more”… ‘In my paintings I have painted the snake’s body with the tree-of-life. The snake eating its own tail also forms a circle, symbolic of the continuance of life…the tree-of-life has taken me on a journey where new perspectives have appeared…

…my investigations of perspective… have suggested to me that developing skills in ‘seeing’ multi-perspectives, even simultaneously, will assist humanity in its ageless quest for physical, emotional and spiritual survival’. Most of us do not engage with the universe because in reality it doesn’t seem possible and probable or, it doesn’t seemingly really affect our daily life. What scientists know is that this is not true. On every day that passes it has an impact. If we are to survive and have a future then we must all seek to understand and know a great deal more about it.

Kathryn is inspired by husband and wife team Prof. Joel Primack and Nancy Abrams. Prof Primack is a Professor of Physics at the University of California, Santa Cruz. Nancy Abrams is a lawyer, and has a BA in History and the Philosophy of Science. They believe ‘human life can continue to be enhanced as long as our creativity in restoring the Earth stays ahead of our material growth’. Their article Cosmology and 21st Century Culture makes for interesting reading.

When it Rained on Mars by Kathryn Brimblecombe-Fox courtesy Artist

They ask the question ‘will news of new discoveries about the universe just be entertainment for an educated minority but, like science fiction or metaphysics, have little to do with the “real world”? They also advocate for ‘art’s capacity to provide conduits between science and humanity’s identity’.

Kathryn Brimblecombe-Fox is ‘using age-old transcultural/religious symbols, predominantly the tree-of-life’ in her work. She says “I explore the close and far distances of the Universe. I visually interpret the tree with 21st century eyes, untethering it from historical interpretations to tease out the messages it holds for us today. After all, age-old symbols have ‘spoken’ to many past generations. Why, should they not ‘speak’ to us?

Why not indeed… but perhaps Kathryn’s last question is the most pertinent…”Are we indeed listening?” Kathryn Brimblecombe-Fox is a contemporary Australian artist living in Brisbane. She is interested in untethering the tree-of-life from historical visual representations. She is also keen to untether landscape from Earth…into quantum and cosmic worlds.

Slightly shambolic a scruffy looking Tom Burke and well-turned out Holliday Grainger feature in an easy to like BBC One TV Series STRIKE written by J.K. Rowling