One of the aspects I always enjoyed when working on events over the years, was the opportunity to put a scene together using period costume.

Costume is all about who we are, where we have been and, where we are going. Today it has become almost impossible for us to make a distinction between styles that will last, trends that will grow and the passing fancies of any season.

However costume is, and remains an important footnote to culture. It is both a changing and eternal form of human expression.

In the English series Downton Abbey, which we reviewed, the costumes for both men and women are truly superb.

Gowns and accessories from the likes of the 2007 movie A Room With A View and the 2004 film Finding Neverland were recycled for the television series, although their use didn’t escape the notice of attentive viewers who wrote to the Daily Mail.

For The King’s Speech many of the costumes were sourced by the costumer through a London prophouse. Both are wonderfully appropriate for the eras in which they are set.

The first series of Downton Abbey, is set in the years 1912 – 1914 during the last gasp of the ‘halcyon days’ from the assassination of the Archduke Ferdinand to the announcement of the advent of World War One.

The costumes the distinguished group of actors are wearing are aligned in style with the reign of Edward VII (1901 – 1910), known as the Edwardian era, which was all about refined elegance. The clothes the girls are wearing are totally associated with the hour glass sillhouette for women, in the days when bone crunching stays were laced tight to achieve it. Many a lady expired on the drawing room floor after dinner unable to breathe.

There is one delicious scene where the youngest daughter Sybil arrives in the drawing room, having kept everyone waiting to have dinner, wearing no stays at all and a new outfit she has designed herself. It has a fabulous set of harem pants with a lace trimmed top with a bejewelled sensational headband to match.

It reflects the arrival of a newfound freedom for women, that would not really take hold until well after the war in England when women finally attained the right vote from 1918, although with conditions of age and property ownership. (Interestingly the first country to grant women the right to vote was New Zealand in 1893).

Sybil’s grandmother is deliciously played by veteran award winning actor Maggie Smith wearing glorious lace trimmed linen garments with pearls, and she is clearly shocked by such a vulgar display. Women wearing pants! What was the world coming to.

The first world war would profoundly change the role of women completely in society and the costume they wore. Especially those sensational hats, worn so wonderfully well by Elizabeth McGovern as the Countess of Grantham.

During the years of conflict with men at the front, women were forced to drive ambulances, work in the fields or factories, farms or offices and constricting bodices, long skirts and elaborate hairstyles were abandoned in favour of the far more practical and functional shorter dressers and cropped hairstyles.

It enabled women to perform their newfound duties with far greater freedom. It is a time when egalitarian ideals were triumphing over aristocratic habits and the automobile replacing the horse was also changing people’s aspirations and ways of life.

The King’s Speech is set in the years leading up to World War II. Bertie wears his military uniforms with quiet dashing style, or joins the rest of their men clinging to impeccably tailored suits. 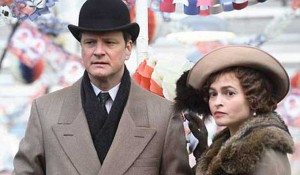 These had been brought into vogue by King Edward when he was a dashing young man on the European fashionable scene. They are still going over a hundred years later, the longest period men have ever stuck to one sort of outfit.

Helena Bonham Carter as Elizabeth Bowes-Lyon leads the ladies brigade, proving her frugality by wearing very simple dresses with pearls, the only lavish detail are her fur trimmed hats and coats when outdoors.

Fashion is a worthy medium for artistic expression. It allows us to creatively communicate our ideas about who we are culturally, what we stand for socially, while reflecting how we embrace change.