French advances in mirror plate technology and the soft atmosphere created by flickering candlelight had encouraged the creation of lavish interiors, splendid costumes and advances in cosmetics during the last four decades of the 17th century.

They reflected that people society were now well in the habit of preening itself and wanting to project their power and status through the costume they were wearing.

King Charles II (1630 – 1685) who abandoned the puritanical coldness of England under Cromwell, wore his petticoat breeches very well indeed when he arrived back home in 1660 from exile at the court of France.

He would bring life back to the English court and his influence to bear on every aspect of the arts, giving himself up wholly to pleasure seeking and beauty.

During the seventeenth century the Cavalier, who was dashingly dressed with an air of extravagance and essential movement, was the epitome of confidence, projecting his ‘devil may care attitude’ and who, with the added power of his costume, gained the confidence to make his mark upon the world.

By the turn of the eighteenth century everything would begin to change. There would be no such thing as a European civilization any more, but rather a ‘western’ one. This period in world history has been described as the age of light and lightness both in the decorative arts and in the mind and it took shape around the great sea powers.

International exchanges were made principally through intellectual movements and at that level of political exchange costume became an expression of a country and its taste and refinement.

A change in social customs also brought about the rapid transformation.

In France from the last years fifteen years of the life of France’s King Louis XIV, who died in 1715, the rigidity of the social hierarchies gradually became modified as he aged and an aristocracy of middle class wealth began supplanting the hereditary nobility.

Many members of the English aristocracy, including their tutors, friends and architects, undertook a Grand Tour of Europe because peace had at last been established on much of the continent.

This meant an increasing amount of travelling men and women were exposed to all new influences and other cultures.

In England costume evolved under the influence of customs, ideas and industrial trading conditions, reflecting an advanced economic development.

The Englishman gentleman of the eighteenth century wanted to abandon convention and embrace informality.

His roots were essentially with the land and so a riding coat, a much more informal mode of dress was the choice.

It was portrayed to the world at large, quickly becoming a much admired form of dress, which was taken up throughout Europe and America and in England’s colonies. 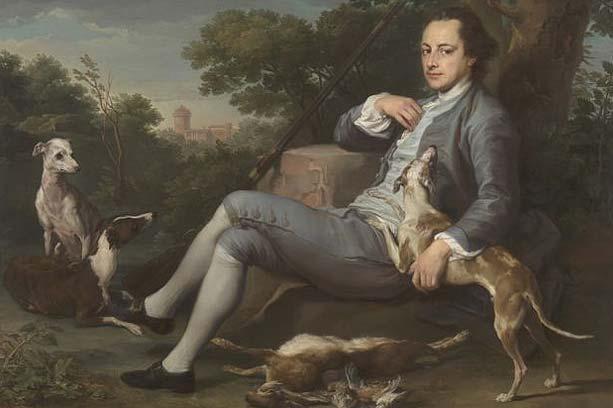 The habits of country life introduced a certain laisser-aller in men and women’s costume, which was stimulated by Romanticism that was prevalent. 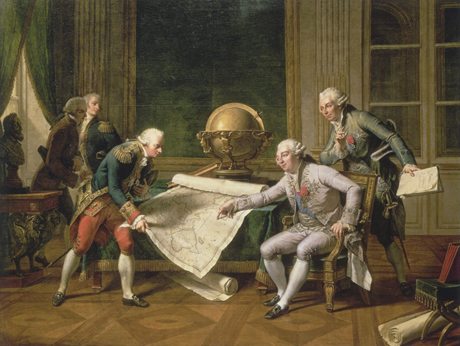 Newspapers criticized the ‘rustic mode’ of women, who according to them, desired to insinuate the idea of innocence and rusticity.

Gentlemen did their best it seems, to resemble their servants and coachmen, with casual clothes launched into political circles and foreign visitors gaining the impression of informal dress at the House of Commons.

When Louis XV returned to Paris he permitted a whole society, weary of the rigid etiquette and ceremony of the previous court at Versailles to savor an almost forgotten independence.

In Paris aristocratic society mingled with circles of high finance and merchant middle classes, who had long dreamed of equaling the Court and now seized wholeheartedly the opportunity to outshine it.

The people became a ‘society’ rather than a ‘class’, and that in its turn produced a newfound freedom and inventiveness. A devotion to poetry reading and pleasure polished taste and refined costume, affecting women most of all.

The sack gown appeared about 1705. It was characterized by a gathered or pleated piece attached to the shoulders flaring out toward the ground.

These dresses with variations were worn for a long time even after 1730, with the addition of folds at the back and pagoda sleeves. 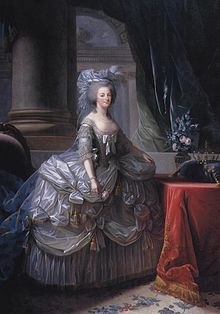 Panniers, known in England as the Hoop petticoat, began around 1714. They took the shape of an oval bell around 11 feet in circumference.

Despite their inconvenience and discomfort they continued until after 1750 not falling from favor until c1765.

In preceding periods men had been as splendidly dressed as women had.

By the 18th century women, not only became men’s equals by virtue of their increasingly important role in society, but also surpassed them in rich clothing.

Expanding markets for trade made a great contribution, as did the invention in 1733 of the ‘flying shuttle’, the ‘spinning Jenny’ in 1765 and the chain loom in 1768 all made their presence felt. Industrial weaving and spinning centers improved greatly at this time, and mechanization led to a fall in prices and expansion of English textiles onto the world market.

The use of cotton had a completely unexpected side effect, the slave trade. Horace Walpole recorded that 45,000 Negro slaves were sold each year to the English plantations of the New World.

Cotton was light and brought about a revolution in European clothing.

Textiles known as Indiennes, lawns and batistes, were used to project an image of a taste for harmonious simplicity and the new ideals of democracy.

The vogue throughout Europe for painted cottons imported from India led to the establishment in Europe of textile industries imitating eastern products. Nantes gave birth to factories producing Indiennes.

Silk was the other end of the spectrum.

The richness and variety of techniques in the Lyons silk mills provided a wide range of decoration for dress silks; taste changed with the times from the full bodied naturalistic style of the beginning of the century to a lighter type of ornamentation using floral elements combined with decorative scrolls

Fashions inspired by Eastern Europe and the orient persisted on an off throughout the century, especially in terms of the theatre.

Society’s dress was equally luxurious; both ladies and gentlemen wore satin and silk, some of the finest made by the Huguenots of Spitafields in England.

The fashion for décolleté dresses allowed for an extravagant display of necklaces or stomachers set with colored stones and diamonds.

The variety of precious materials available to jewelers was greater than in the seventeenth century. Russian aquamarines and amethysts were available and Siberian emeralds were of the finer color than those from South America were.

True lovers knots were bows, which in their noblest form were diamond set and worn in threes, graduated to follow the line of the bodice.

Owners frequently remodeled their jewels to accommodate newly acquired gemstones in the latest fashion and as a result, 18th century diamond jewelry is rare.

King Louis XV’s mistress Mme. de Pompadour wore the Robe a La Française. Its bodice was fitted and more than often opened to reveal a stiff bodice trimmed in front with a stomacher, triangular and richly decorated or, with a ladder of ribbons.

Together with her favorite artist Francois Boucher she renewed enthusiasm for Aphrodisian themes. Flaming hearts, quivers and arrows, roses were all depicted in splendid.

In the case of the Grande robe, worn at court, the over gown opened over an underskirt of the same material with trimmings of flowers and various types of ornament. The Robe a L’Anglaise appeared about 1778, opening its front over a waistcoat formed of two panels, the closely fitting bodice ending in a point a the back.

Men at this time opted for plain velvets in a style that was both elegant and becoming. Tight fitted breeches were fastened with garters at the knees whereas formerly breech bottoms had been loose.

The tricorne hat was carried under the arm, edged with gold braid or feather edging. Waistcoats of embroidered silk were at first shorter, but lengthened by the end of the century. This is a period where the taking of snuff became highly fashionable and in England in the 1760’s there was a fashion for all sorts of agate snuffboxes mounted in gold with messages of love in the form of a cupid.

In 1770 a tailor by the name of Dartigalongue announced his customers could obtain ‘ready made’ garments in all sizes, which could be sent to the provinces and abroad.

This was the first time anyone had conceived the modern ready to wear system, which would now develop rapidly. 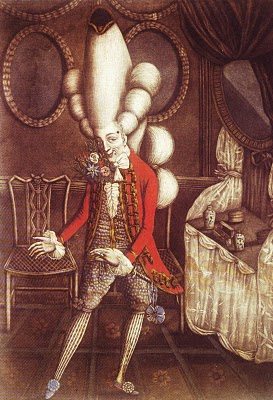 The Macaroni. Mezzotint by Philip Dawe for John Bowles. London 1773

During the 1770’s in England, and in France, there was also a simultaneous elevation of the hair for both men and women.

At first it was simply brushed stiffly up from the forehead, and then suddenly it soared, totally out of control, while the queue behind was bound into a greased club.

Powder, pomade, and even plaster of Paris were the ingredients but most especially the powder, greyish, pink, blue, violet, and laced with scent.

It is extremely difficult now to get an exact idea of the heights to which these toupees grew; the evidence of the caricaturists, is profuse, and the Macaroni took the town by storm

A group of young men interested in extreme fashion they formed the Macaroni Club, introducing a plain, very much shorter coat, pleated and flared at the back coat to be worn with a plain or horizontally striped waistcoat and plain or vertically striped breeches. They were called Macaroni’s because this was the period when Italian pasta first appeared in London and as Italians were renowned for their flamboyant excess…

Macaronis painted, wore two watches and carried pretty nosegays and male vanity and modern effeminacy reached hysterical levels, focused on the figure and head of the Macaroni, the overdressed and effete man about town who delicate and completely contemptible. For many commentators, the Macaronis were a sign of the deep corruption and luxuriousness of a modern society fueled by new wealth. In fact they illustrate a recurrent phenomenon in male fashion; a younger generations’ radical, provocative rejection of ‘good taste’ in dress.

It eventually led to a revolution of the evolution in costume and style.