“We believe that when men reach beyond this planet, they should leave their national differences behind them” said President John F. Kennedy in 1962. 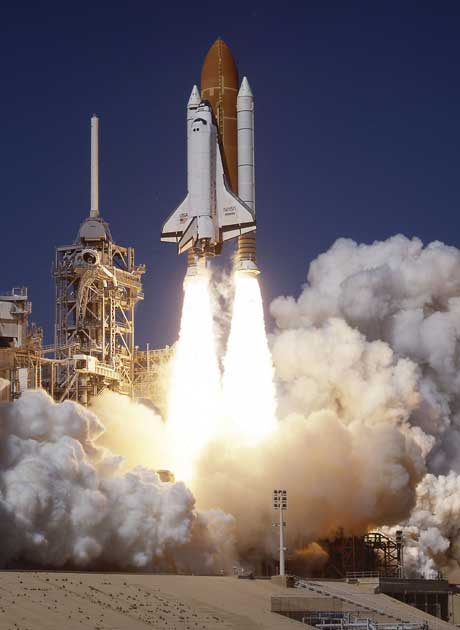 The final Atlantis Space Shuttle Mission countdown is over. Atlantis has left Cape Canaveral to rendezvous in orbit with the international space station above the earth for the final time. “Let’s light this fire one more time, Mike, and witness this great nation at its best,” said Christopher Ferguson, Atlantis commander, to launch director Mike Leinbach just before the lift-off of STS-135, 8 July 2011.

With an overwhelming sense of sadness my eldest son Paul and I rose in the early hours of this morning to see Atlantis rocketing off into space. We watched until we couldn’t see it anymore. After it was over we reminisced about how he was only nine months old and sitting on my lap when Neil Armstrong stepped out onto the moon at 2:56 on July 21st 1969 taking that first great leap for mankind. During their lifetime the American Space Era and team at NASA has inspired my three sons in their passion for knowledge of, and about the world of flight and the universe. Many believe the current American President Barack Obama is wrong to end the manned space flight program. What it has achieved can never be measured just in financial terms. For our world it has meant so much more. Humankind thrives on being pushed to, and beyond its limits. It thrives if its leaders give them a sense that the new and unknown is within their reach. Exceeding boundaries is not realised without some sacrifice, but those who embark upon the enterprise know the risks and just do it anyway, simply because it’s there to be done.

Carpe Diem, seizing the day by brave men and women throughout history has meant many extraordinary feats of courage, bravery and skill. Like those of Group Captain Sir Douglas Bader CBE, DSO & Bar, DFC & Bar, FRAeS, DL who, despite losing both legs in an aeronautical accident, became a pilot ‘Reaching for the Sky’ during World War II. He was so famous they made a movie about his exploits that included his incarceration in Colditz Castle where the Germans, while admiring his spirit, threatened to take away his prosthetic legs if he didn’t stop trying to escape. He said, “Don’t listen to anyone who tells you that you can’t do this or that. That’s nonsense. Make up your mind… have a go at everything…Go anywhere you want to. But never, never let them persuade you that things are too difficult or impossible.” 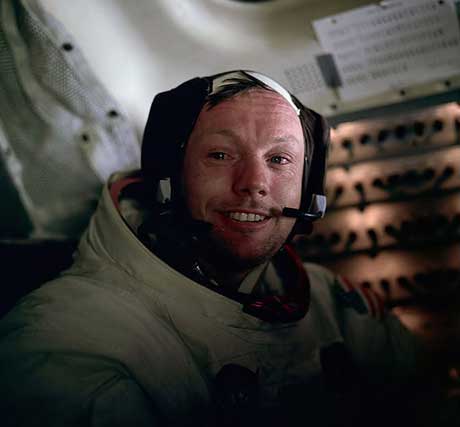 First Man on the Moon Neil Armstrong at the Controls

Societies thrive when they are empowered by great visionary leaders to tackle new challenges. The men who sent the first American into space accomplished their tasks in an amazingly short time. When NASA was founded by President Dwight Eisenhower and Congress in 1958 they went from nought to launch Alan Shepherd into space by May 5th, 1961. Just three short years. Then after Kennedy said in September 1962 ‘we choose to go to the moon‘ they went out and invented how and had landed a man on the moon by 1968. It was surely nothing short of amazing. And, they achieved it without the aid of the sort of technology we have now.

It is the end of a grand era of space exploration that started with America’s most visionary president, John F Kennedy who said  ‘Many years ago the great British explorer George Mallory, who was to die on Mount Everest, was asked why did he want to climb it. He said, ‘Because it is there.’ Well, space is there, and we’re going to climb it, and the moon and the planets are there, and new hopes for knowledge and peace are there. said Kennedy. He also said that ‘if this capsule history of our progress teaches us anything, it is that man, in his quest for knowledge and progress, is determined and cannot be deterred’.

As Michael Austin Resident Scholar at the American Enterprise Institute for Public Policy Research says in his excellent Article The Final Frontier. ‘Waste and mistakes occur all the time, but there is a fundamental difference between spending money to pay back political supporters and spending money to push the boundaries of human knowledge and achievement.

NASA may need to be rebuilt from the ground up, but surrendering the dream of manned exploration of space is certain to bring only a further sense that under this president, America is eager only to embrace mediocrity and a poverty of human spirit’ If America does not re-start its space program again soon then all the collective knowledge of its older team members waiting to be downloaded to the next generation will be lost. And once knowledge is lost, society can take up to 2000 years to re-learn the lessons. We only have to examine the journey of western civilisation to know that this is true.

“The genesis of life is as inevitable as the formation of atoms …. Life exists on other planets and we will find it within 20 years.” said Andrei Finkelstein, director of the Russian Academy of Sciences’ Applied Astronomy Institute, which was reported by Interfax news agency. 27 June 2011.

We would not have had men on the Moon or even the Space era at all if authors such as H.G. Wells and Jules Verne and newspapers had not invented the Comic strip, which first made people think about space as a final frontier that man could conquer. Many of the stories were gleaned or based on ancient Greek myths and legends.

A great maritime force, the legend about the city of Atlantis, which disappeared under a giant wave during an earthquake, was first mentioned by ancient Greek Philosopher Plato in his dialogues written 360 years before the Christ event. In history many people have tried hard to find Atlantis and recent academic research has put forth a theory that it may be the island of Thera in the Mediterannean. It is important to clarify the use of the word legend as some may be fearful a lack of truth is suggested. However, that is not the intention. Originally a legend was understood to be an illustrative story, one that conveyed a profound spiritual truth in an attempt to explain the inexplicable.

In 1941 DC Comics debuted the story of Aquaman, a superhero whose home was the lost city of Atlantis. With his superhuman abilities to breathe underwater, communicate with sea life, and swim with great vigour. When he was finally retired from super heroedom in 1985 it was coincidentally, the year the NASA Space Shuttle Atlantis lifted off to make its maiden voyage, named for the marine vessel, which was in turn named after the lost legendary city.

Comic books from the 1930’s to the early 1950’s became a mainstream art form. They gained immense popularity during the war as cheap, portable, easily read tales of good triumphing over evil. Their makers and their heroes, including the space hero Buck Rogers, inspired humans ‘to boldly go where no man has gone before‘ in the mythical Star Ship Enterprise. It went on its all important Star Trek missions for decades watched by millions the world over ‘to explore strange new worlds and ‘to seek out new life and new civilizations. Another countdown still happening in America is for the days leading up to the annual Comic Con phenomenon previewing 20th July. Comic Con was founded in San Diego in 1970 after the space program at NASA had landed the first man on the moon. The convention is all about Pop Culture and a great ‘buzz’ for its millions of fans world wide. It was originally organized for sci fi comic fans, although these days it has expanded its horizons.

The recent character-centric comedy movie Paul, about a loveable alien trying like the ficitional E.T. to return home, is a great example of the hype that surrounds this space nerds convention, at which many of those attending arrive in costume. The protagonists fulfill their dream to appear on stage at Comic Con to launch their book all about their adventures with Paul, the pint size evangelising alien from outer space with the awesome attitude. There are a whole host of superheroes and creatures there too from all over the galaxy and, a great deal of fun is had by all.

The dynamic duo of Graeme Willy aka Simon Pegg and Clive Gollings aka Nick Frost thrill the Comic Con crowd, who go balistic as they encounter Pegg, Frost and their insane supporting cast, ranging from Seth Rogen to Sigourney Weaver who appears ‘dressed to kill’. The whole idea of the movie is that they are all helping the cute alien Paul to go home.

But there is a point when he is going to give up until he is motivated by his friends on earth to keep on trying. They know that it is all about not giving up on hope, which is but a waking dream.

Man can live about forty days without food, about three days without water, about eight minutes without air, but only for one second without hope.