During the eighteenth century in Europe and England philosophers believed the universe was a harmonious place. Apart from reclining on sofas and settees the fashionable slept until midday in beautiful beds draped with luxurious fabrics or embroideries… Till noon they sleep, from noon till night they dress. From night till morn they game it, more or less. Country house owners gained support in all ranks of society by entertaining people, finding jobs for them, giving custom to local shopkeepers and innkeepers, spending money lavishly within their community and by marrying off their sons and daughters to the right people. As their good works increased so did their opportunities of asking the king or leaders of government for a rise in rank or perquisites (perks). All of this power and privilege brought inherent responsibilities and whether socially or politically ambitious it was generally a title and local prestige that was at the summit of the country house owner’s ambition and achievement. 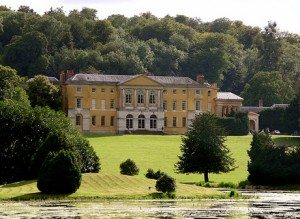 To call it a ‘country house’ in the first place is a perfect example of ‘English understatement’. For most people a country house conjures up the idea of a cozy cottage, a mountain retreat or a quaint seaside villa. But for the English of the eighteenth century a Country House was a grand Palladian style inspired mansion such as West Wycombe, owned by one of the centuries most colourful characters Sir Francis Dashwood, which is seen at its best romantically across a lake at sunset. Mellow, golden, secure and solid these extraordinary houses provided not only a backdrop for political life, agriculture and sport but also for a social round of county balls and familial gatherings.

While her only known image may seem to reveal otherwise, there was nothing really plain about Jane. Her novels belong as much to her times as do the list of battle honours won by those involved in the era’s significant war campaigns.