900 years before the Christ event someone of unsurpassed literary ability wrote this superb line from the Song of Songs, a book of the Hebrew Bible.

Other evidence that jewellery (jewelry) and love were associated in the ancient world is found in the House of Vetti excavated at Pompeii from September 1894 to January 1896. Amorini in a wallpainting in the Casa Vettii at Pompeii

On the house’s walls a detailed fresco depicts a goldsmith’s workshop in which a group of amorini, or cupids, whose very name means desire, are engaged in making jeweled ornaments intended to wound their victim’s heart.

Jewelers had a ready market at Pompeii. 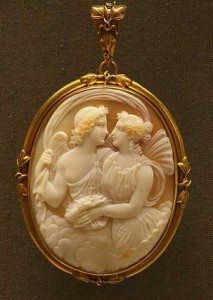 This is where the elite in Roman society went for a holiday and to enjoy the company of friends. The Cameo technique thrived and they were made of different materials such as rock crystal, sardonyx, agate and glass and they were very popular. Subjects ranged from portraits to portrayals of deities and mythological episodes.

One of the most famous depicts the family of Emperor Augustus. Down the centuries a naughty mischievous Cupid became an icon shooting his bow to inspire romantic love. Over time he became the personification of love and courtship in general.

In the fashionable world of nineteenth century England young ladies of the classical school of ornament wore Cameos.

The fashion for them began soon after Napoleon’s Italian campaign of 1796 when they were brought back to France from Italy. 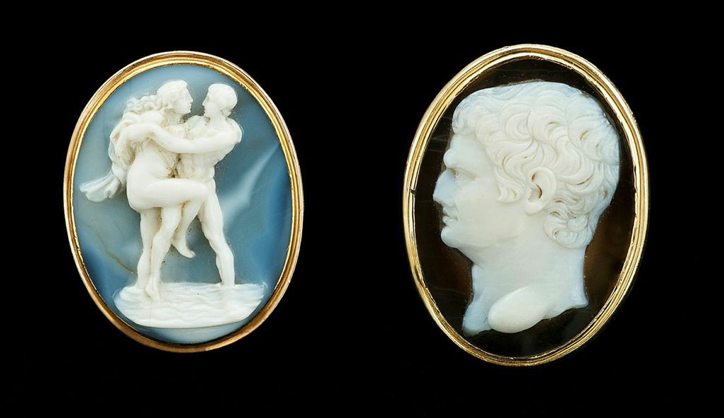 Many were of Greek or Roman origin. Their beauty and perfection fascinated Napoleon. He had some mounted especially for his own use and, for his sister the very beautiful Paolina Borghese.

Cameos were so popular, they were set in all sorts of jewels such as tiaras, necklaces, bracelets and earrings, usually mounted in simple gold collets. During the last 50 years of the nineteenth century, on the basis of a mounting interest in archaeology any lady of fashion visiting Italy would consider her tour of Rome incomplete if she did not call into the Castellani’s shop near the Spanish Steps to acquire one of the famous pieces of Italian archaeological revival jewellery offered there.

It was 1859 when an article appeared in England’s popular magazine Punch. A satirical sketch, it had an amusing extract attached that made the point on how just hard it was for fashionable ladies to wear the jewellery inspired by the archaeological remains of ancient Roman culture.

‘You know the Randoms have just returned from their long residence on the Continent. I spent a day last week with Imogen Random, who kindly showed me her jewel casket. The only drawback to her classical arrangements is her small and diminutive stature… the weight of her gladiator’s necklace is positively distressing to the collar bones; her hair is visibly diminished since she took to wearing Greek daggers and Roman pins, both of which are so pretty and so antique, … and her poor little ears, well they suffer martyrdom with the weight of her earrings, exquisite flying figures of Victory, which are supposed to be constantly whispering joyful tidings of new conquests…

…employ every art with your Papa Maude to induce him to bring you to the Eternal city where we may have the inexpressible happiness of shopping at Castellani’. When people today talk about jewels, jewellery, gemmology and gems it is clear the vocabulary has become confused. Gemstones are treasured minerals found in the earth. ‘Gems’ are the objects fashioned from them. Jewels are gems ready for mounting into jewellery, and other objects of art.

And, jewellery – well it is the finished product that if its designer has succeeded, adorns its wearer well.

Be sure to read our four surveys about the evolution and creation of love jewellery from Cupid to Cartier.

They are Rome to Renaissance, Restoration to Revolution, Regency to Revival and Romantics to Retro

At Rippon Lea House & Garden in Melbourne from 1 October – 24 December 2014, there will be many events surrounding the Spring Garden Festival – Become a Member!