CROSSING the play will commemorate and celebrate the Bicentenary of the Crossing of the Blue Mountains in New South Wales in 1813. The Play CROSSING has been written and will be presented by direct descendants of early Australian explorer Gregory Blaxland (1778-1853) award-winning writer Wendy Blaxland and her co-producer daughter Jessica Blaxland Ashby. They will take audiences back in time to access the wonderful, difficult scenery of the Blue Mountains during the period when Blaxland, together with William Lawson (1774-1850) and William Charles Wentworth (1790-1872) opened up a pathway to access the fertile land beyond nature’s barrier. Blaxland declared there was enough forest or grassland “to support the stock of the colony for thirty years”. Between them, a talented trio of actors, Ben Coombs, Lucy Green and Michael Rebetzke, will play some forty characters involved in the journey, to take place in the unique setting of Gregory Blaxland’s home at Brush Farm Eastwood, which has been superbly restored. Music created for the CROSSING by Darug woman and musical educator Jacinta Tobin will be integral to the piece directed by Sher Kearney and designer Deirdre Burges. 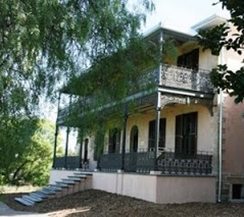 There is no doubt the play CROSSING will be a rich experience, as you meet and greet early settlers and choose from salt beef or fresh kangaroo tail for dinner. Sounds too divine. Brush Farm House, 66 Terry Road Eastwood, Dates & Time 25- 27 September 3.30 pm and 7 pm – Information -  BOOKINGS