These are all names well known in the world of art, particularly the world of Cubism, represented by 81 paintings, works on paper, and sculpture: 17 by Braque, 15 by Gris, 15 by Léger, and 34 by Picasso.

The show will trace the development of Cubism and will also include an unprecedented number of papiers collé by Juan Gris and a stunning array of Léger’s most famous series, his Contrasts of Forms.

American philanthropist and cosmetics success Leonard A. Lauder was lured to both the forms and style of Cubism first by a drawing he encountered that had been rendered by Fernand Léger.

It came up in a sale at Sotheby’s in 1976 where he was attending a viewing, lured on always by the vagaries and variations in the world of art. Fascinated by Cubism’s forms, Leonard Lauder ended up buying the Léger work. It would become the landmark or founding piece that started him collecting the Cubists and their amazing works.

Happily it consumed his spare moments as he studied and enjoyed happy encounters of the first kind with the artists he admired. Detail: Leonard A. Lauder at home with Picasso’s “Nude in an Armchair.” Photo Damon Winter, The New York Times

Mr Lauder has gifted this extraordinary array of works, by two Frenchmen and two Spaniards, to The Metropolitan Museum of Art in New York; one of the largest gifts ever given in the museum’s history.

For over forty years, and throughout many years where these art works were ‘still affordable’ although perhaps not ‘fashionable’, Leonard A. Lauder amassed his great ‘Cubist’ collection.

As well as sharing these unique works now with the world, he is also transforming the presence of modern art at the Metropolitan Museum of Art in dialogue with its encyclopedic collections.

He is providing dedicated two-year fellowships, with two new recipients arriving each year. The Leonard A. Lauder Research Center for Modern Art will serve as a center for scholarship, archival documentation and collections, and innovative approaches to studying the history of Cubism, its origins and influence

World War 1 would interrupt the journey of the style now known as Cubism, which emerged with Picasso and Braque between 1907 and 1914 and peaking during the early twentieth century at Paris, where it became a highly influential visual art style.

Cubist artists didn’t want to copy nature, or follow traditional techniques or adopt former styles. They believed they were not producing shapes and forms from the past, but innovating an original style based on their own ideas of what texture, colour, space and form should be. They also added their own reality, endeavouring to depict how the world was causing society to fragment.

If they were influenced at all in their new style and its development, there are those who believe some of their early works are reminiscent of landscapes by French artist Paul Cézanne (1839-1906).

Cézanne, also unique in his time, started his own revolution in art with a style he described himself as ‘ballsy’ – ‘more depth than surface’.

Today categorised by those who love to put people in boxes as ‘post-impressionist’, Cézanne was an artist who inspired the modernists with his own method of building form through a clever creative use of colour.

Cézanne upended conventional theories, rendering his own take on perspective, changing the modern landscape of art.

Cézanne’s Bathers, encompasses numerous paintings of this name, although three large scale female bather groups are perhaps the most well known. The figures were ‘architectonic in structure, solid forms with earthy tones’. They were rendered en plein air, featuring a tonal scale that addressed many of the technical challenges artists face when dealing with perspective, form and colour, especially when rendering the nude figure.

His assertive parallel and diagonal brushstrokes became key elements of his mature style as it developed. He created both depth and dimension, drawing his viewers into the landscape of his work to admire its many and varied shapes.

This is a technique the Cubists also achieved, albeit by bringing their own stylistic impressions into the equation and inventing a whole new visual language.

Cubism quickly moved through analytical and synthetic periods during its development, creating the illusion of fragmentation in society and culture. With complex views of their subject matter, Braque and Picasso first analysed the mathematical complexities of their own techniques and then adopted new methods of working as they created.

Although its impetus in reality died in the fires of the first world war, Cubism and its influence would be ongoing after that war and well into the twentieth century. Picasso, Léger and Braque were still around making an impact after World War II, with Picasso often grabbing world headlines in the swinging sixties. He and his fellow Cubists had a profound influence on the prevailing style of sculptural forms in their time, and most interestingly on the development of modern architectural style and culture.

Most notable in the world of architecture would be that of the Swiss architect Charles-Édouard Jeanneret-Gris better known as Le Corbusier (1887-1965), who seemingly adopted, or was influenced by their ideas, to help fashion his own amazing architectural aesthetic.

It was one that required its participants to experience both the emotion and reality of moving through space as art. Other artists during the 1920’s who adopted the style, layered in their own impressions as well.

Eventually the fragments reformed and informed yet through more angular shapes.

These were sleek, chic, streamlined and all brand new and again and while unconventional, they simply challenged perceptions with their own ‘art deco’ style.

Co-curators of the Leonard A. Lauder Cubist Collection Emily Braun and Rebecca Rabinow have produced a publication as a resource for the study of the four artists and their role in developing Cubism.  Ms Braun is a Professor of Art History at Hunter College and the Graduate Centre of the City University of New York, while Ms Rabinow is also in charge of the Leonard A. Lauder Research Centre for Modern Art at The Metropolitan Museum. The wor includes 22 essays by preeminent scholars in the field.

Now 81, Mr. Leonard Lauder does not believe his journey with Cubism in the world of art has ended and since he made the gift in April this year, he has already purchased at least three more. 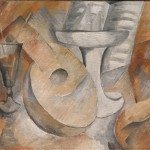 “It’s not the possession of the picture, it is the search and the hunt,”

The Metropolitan Museum of Art