Palace Cinemas in Australia annually presents the Cunard British Film Festival 2017, which showcases particular achievements in filmmaking emerging from the British Isles. Held in Sydney, Melbourne and Brisbane, Canberra, Perth and Adelaide, the opening night film this year Breathe  is sure to pack a powerful punch. 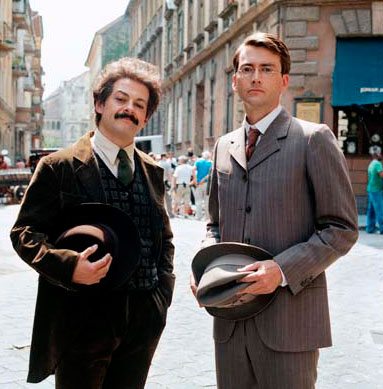 He perhaps gained wider public notice by becoming the voice of computer generated character Smeagol/Gollum in The Lord of the Rings Trilogy.

A challenging story, particularly for people of my generation who had first hand experience of the crippling disease polio, Breathe is not only a love story of the most admirable kind, but also about remaining optimistic when the chips are down and all the odds seem to be against you.

Breathe is from a screenplay by two-time Oscar nominee William Nicholson (Gladiator, Shadowlands) from a true story about two indomitable people who defy all the odds while paving the way forward in a change of attitudes and adding a provision for hope. The closing night film Finding your Feet a romantic comedy will be sure to tap dance its way into everyone’s heart. Just the names of the actors will inspire… Imelda Staunton, Celia Imrie, Timothy Spall, Joanna Lumley, David Hayman and John Sessions.

In between first and last there is a fine array of films to see. The Special Event documentary sounds like a doozy, Manolo: The Boy Who Made Shoes for Lizards featuring Manolo Blahnik legendary designer of shoes.

His dedication to his craft has made him one of the world’s most famous luxury shoemakers. Its no surprise then that all the world fashion heavy celebrities are involved, including Anna Wintour, Rihanna, Karlie Kloss and André Leon Talley among others.

Synonymous with whimsical yet elegant heels and the popular movie Sex and the City’s Carrie Bradshaw, Manolo: The Boy Who Made Shoes for Lizards promises to be a sophisticated, unpredictable funny, charming and immensely watchable film, showcasing Manolo Blahnik and his development as a designer from an outgoing child to the active 74-year-old living in London today, one who still retains both his interest and action packed involvement in the world of fashionable feet.

The official selection includes 6 Days, Another Mother’s Son, England is Mine, Eric Clapton: Life in Twelve Bars, Film Stars Don’t Die in Liverpool, Goodbye Christopher Robin, How to Talk to Girls at Parties, Jawbone, Mary Shelley, On Chesil Beach, Swallows and Amazons, That Good Night, The Bookshop, The Death of Stalin, The Exception, The Journey and Tulip Fever.

Agatha Christie’s Classic Mysteries from the Queen of Crime include Death on the Nile, Evil under the Sun, Murder on the Orient Express and the Mirror Crack’d and, if you feel like solving a British mystery then you can watch Blow Up and Victim.

Goodbye Christopher Robin will be sure to have plenty of appeal. It tells the story of A.A. Milne, the creator of Winnie the Pooh and his famous owner Christopher Robin who live in a world full of happiness – well so it seems. It stars Domhnall Gleeson (About Time, Brooklyn, The Revenant, Star Wars: The Force Awakens) with Margot Robbie, Kelly Macdonald, Phoebe Waller-Bridge, Alex Lawther and Will Tilston.

Tulip Fever is another I am interested in, because it is set in seventeenth century Amsterdam, during a unique time in my favourite historic century, when the city was on fire artistically in its Golden Age, while colourfully ablaze with Tulipomania.  It will hit the movies just before the Dutch Masters from that same Golden Age are on show at the Art Gallery of NSW. Her mother Mary Wollstonecraft’s Rights of Women was a founding text for modern feminism, and her daughter Mary Shelley ran away to France aged 16, producing a novel that became one of the most prophetic and popular horror stories of the century.

A second edition followed this and later there was a third edition for which Mary Shelley heavily revised the text. This was the first popular edition published in 1831 by Henry Colburn and Richard Bentley. Mary Shelley had been pressurised to make the story more conservative, and the 1831 text is the one most read today. However the original is still in circulation too and scholars usually prefer it. My final selection as a must see will be The Bookshop with Emily Mortimer, Patricia Clarkson and Bill Nighy a drama set in a small town where prejudice reigns in 1959 England. It’s all about a ‘cultural awakening’ and sure to pack a punch, quietly, giving food for thought.

Opera Projects Sydney will launch its inaugural production of La Traviata on 29th January aimed at widening the base for opera, by offering a sensible price tag