Successful Aussie film director and writer Baz Luhrmann warned us all that “… living a life in fear is a life half lived.

His hit movie Strictly Ballroom, now also a musical, showcased the tango, sashay and bogo pogo, inspiring the whole world to don soft shoes with tapping toes and throwing their cares to the wind, to dance as if no one is watching.

From Hollywood to Bollywood from Footie Field to the Ballroom Floor, celebrities featuring in the Channel 7 2014 television series Dancing with the Stars certainly do not enjoy the same luxury.

Each week millions tune in to watch and comment on and about they’re every move.

Creative celebrity people all have signature personality characteristics and this year’s 2014 series will be remembered for its stars delivering excellence in both dance and performance art.

This feat was performed amazingly by celebrities who prior to going on the show had never really danced ballroom style before.

Decked out in sequins and sporting sensational hairdos they dazzled us all each week.

From the first instance this program has always been about having a great deal of fun and raising a great many funds for each celebrities chosen charity. 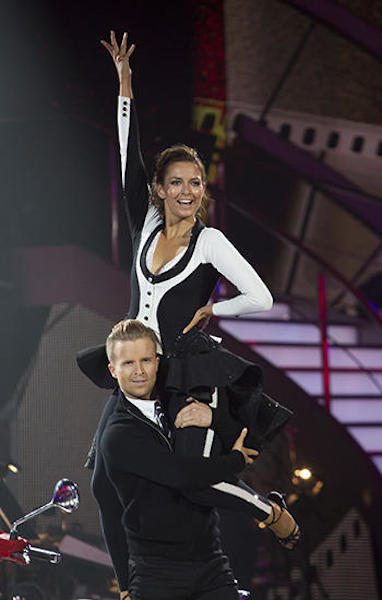 Ricki-Lee and her partner Jarryd Byrne, sensational dancing each week on Dancing with the Stars 2014

Mind you the celebrities were either ‘entertainers’ or highly creative, but that doesn’t always mean your feet will automatically know what to do.

They came from a diversity of careers and backgrounds.

Those that didn’t make the grade fell by the wayside each week, dashing many hopes of seeing it through to the end.

The art of pleasure however today is a really serious business.

As the competition progressed the suspense about who would remain on the floor built to a crescendo with people texting wildly for their favourites.

A reminder that the show is not just about the best dancer winning, viewers ‘popular’ votes are added to the scores.

In the end for the finale there were only three left; a footballer, a television star and a pop singer. David Rodan, Lynne McGranger and Ricki-Lee had proved beyond doubt that they all had the right stuff.

Throughout the series AFL star David Rodan certainly proved he knew about fancy footwork, because seasonally on the football field he has always determinedly revealed his true style of sportsmanship that overflowed on the dance floor.

There could only be one winner and with twinkling toes AFL footballer David Rodan won Dancing with the Stars 2014 triumphant from field to floor.

The semi-final had been totally brilliant, with 10’s abounding, all dished out by delighted judges.

The judges responded well to the enthusiasm of the live audience who were giving standing ovations all night long.

Everyone expected a great night for the grand finale and they were not disappointed. It got off to a great start with all the contestants for the show setting the studio and audience on fire. Dressed in red the girls looked great and together with the boys shook their booties bountifully.

This was the night the trio of finalists Ricki-Lee, Lynne and David all had to produce three dances in their bid to win the mirror ball trophy.

First up was the Judges Choice.

David and his partner Melanie Hooper were first on the floor turning in an awesome performance.

They gained a perfect score of four ten’s for their sensational Quickstep.

Lynn and Carmelo Pizzino took up the challenge of delivering their version of all that jazz, gaining four x 9’s. Ricki-Lee and Jarryd Byrne’s Pasa Doble was way beyond the perfect score that they received; seamless, breathtaking, superbly defined and brilliantly sophisticated.

The next performances were about the free style where the rule book is overturned. Bang Bang Ricki-Lee danced and sang, with Lynn and Carmello paying a tribute to iconic Hollywood movie songs.

Without doubt though, for me David and Melanie were top of the pops with David performing his amazing interpretation of Michael Jackson style moves. Awesome plus.

Then the evening meant the trio became a duo with double bang bang as Ricki-Lee and Jarryd who had achieved perfect scores for their two dancers were eliminated.

This left David Rodan and Lynne McGranger to compete for the mirror ball trophy.

Carmelo and Lynn opted for the Jive, netting four nine’s while David’s final cha cha, the dance he had raised the bar with on night 1, was perfect and he received four ten’s.

Then it was time to find out who had been the most dazzling of all. David and Melanie, Bollywood is best…

David Rodan scores for the finale were perfect 10’s from each of the four judges for all three of his dances.

No one would have foretold that he would make the transition from the football field to the ballroom floor in such fine style.

We should have realised when for the semi final David gained a perfect score for his Bollywood opening.

Melanie Hooper his coach and partner in this energetic enterprise, showed her complete mastery over the many choreographic styles on show and her wonderful abilities as a teacher par excellence.

She helped him to ‘burn the floor’ nightly, sometimes receiving accolades from the audience although not always from the judges. Lynne and Carmelo and all that jazz

They found themselves having to mark their charges very hard from the first episode because the standard was looking so incredibly high on the first night.

Falling down the stairs and being kicked off first were the key issues identified by one of Australia’s favourite actresses Lynne McGranger, when she found herself far removed from the Diner at Home and Away.

Tripping the light fantastic each week with Carmelo Pizzino proved to be a pleasure for Lynne who fulfilled the role of the ‘old trouper’ who believes there is no business like show business.

Carmelo turned out to be a passionately perfect partner for this successful former schoolteacher, who knows the show must go on despite injuries and timing schedules.

She kept her chin up, her smile on and gained a popular following.

Forgetting the cameras and enjoying herself was how she managed her success, which saw her make the final three.

Considering she was twice the age of some of the other contestants many found incredible, but she showed she was not only a feisty foxy lady but also a classy one. How about a Roman Holiday…

Ricki-Lee the youthful singing song writing sensation, who leaped to fame on Australian Idol, showed us all how adept at surmounting challenges.

Throughout the series her dedication to giving respect to what dancers do has been much admired.

She often found herself way outside her comfort zone, sometimes freaking out at doing the opposite to her usual cross between jazz and hip op on stage when performing.

Ballroom dancing she noted was like turning 360 degrees and finding yourself in another country altogether.

However because she is an ultimate performer, she knew she had to get on with the show and pull a rabbit from the hat of life.

She couldn’t have had a better guide than Jarryd Byrne, surely one of Australia’s most talented choreographers and dancers today.

He is currently on stage as an integral aspect of the cast of Baz Luhrmann’s Strictly Ballroom The Musical. And it’s no wonder.

Can understand why Ricki-Lee considered herself the luckiest of contenders.

Next series I do hope that Channel 7 consider giving away two mirror ball trophy’s, one to the judge’s choice and another to the people’s choice.