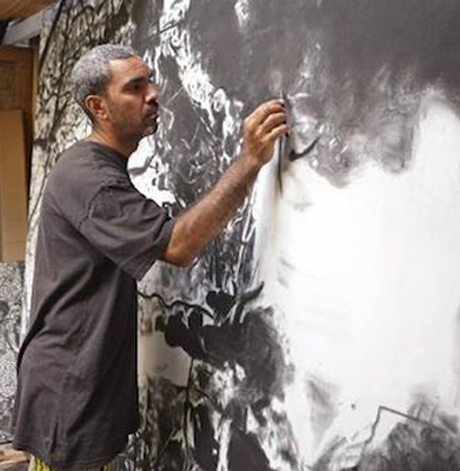 Daniel Boyd in his studio working on Untitled 2014 (oil, pastel and archival glue on canvas), for which he received the 2014 Bulgari Art Award - detail

The house of Bulgari, steeped in history, is one of Italys’ most recognisable luxury brands.

It has been coveted and worn by many a celebrity, and arguably one of the most famous being Dame Elizabeth Taylor.

What many may not know is that each year since 2012, Bulgari awards a very generous art prize.

On April 15th, I had the pleasure of being invited to the Art Gallery of New South Wales as Dr Michael Brand, the director of the gallery and Julie Ann Morrison, managing director of Bulgari Australia, announced the very lucky recipient of this handsome prize.

Daniel Boyd, 31 is this years winner.

Boyd is a Kudjla/Gangalu man from far north Queensland, Australia. He left Cairns to study at the Canberra School of Art and now resides in Sydney, Australia.

His work “Untitled 2014”, presents an idyllic scene drawn from a found photograph of Pentecost Island in Vanuatu.

This was the home of his great, great grandfather before he was brought to the sugarcane fields in Queensland as a slave. Contemplative, emotive and intriguing, Untitled 2014 exposes this aspect of our history and explores Boyd’s tenuous attachment to the country of his ancestors.

Says Wayne Tunnicliffe, head curator of Australian art at the gallery, “the image is formed from dots of paint where tonal gradations and shifting light create the landscape and figures, the dotting reminiscent of various historical and recent sources in both western and Aboriginal art”.

Morrison, for Bulgari summed it up beautifully, describing the piece as an “astounding and masterful painting”.

On a personal level, I found it serene and with a depth and softness that lets you feel part of the image, enveloped by the landscape. It is incredibly intimate.

It should be pointed out that this award is unique to Australia. An extremely beneficent reward.

This award was created to support mid-career artists who specialise in contemporary Australia painting. It is not an open competition, like the Archibald, Wynne and Sulman prizes. It is awarded to the artist rather than the individual piece of work.

It is one of the most valuable awards in Australian art. There is no application process. The Gallery’s trustees, the director and head curator of Australian art, with no input from Bulgari, decide who’s ethos will be best placed in the gallery.

And like Bulgari, one who’s relevance will stand the test of time.

When Sotirio Bulgari arrived in Rome from his homeland Greece in 1884, ”what struck him was the magnificence and greatness of those simple lines turning into much more sophisticated and articulated ones.” He founded his flagship store at #10 Via Condotti just near Romes’ stunning Spanish Steps, and a legend was born.

With such an eye for beauty and colour, it seems a perfect fit for this company that celebrates it’s 130th Anniversary in Rome this year, to support and nurture the arts. After all jewellery is another form of art.

The hope of Bulgari is that the residency in Italy can be used as a time to reflect, travel and connect, to re-ignite energy and generate significant publicity.

Julie Ann also pointed out that artist in mid-career often need support both financially, and in spirit to raise them up to the next level of their journey. This award encapsulates this superbly.

Morrison also announced that Bulgari will extend the award for the next three (3) years, enabling another three artists to reap the rewards. What a fantastic opportunity for any artist to receive. Daniel mentioned he had travelled to Italy once before, to the Venice Biennale in 2007.

One can only imagine the influences and inspiration he may derive from this unique experience.

We, here at The Culture Concept Circle, wish Daniel the best for his upcoming adventures in one truly most artistically inspiring countries. We also look forward to the next three years to experience the works of the next fortunate painters, who will benefit from the Bulgari Art Award.