Four score and seven years ago our fathers brought forth on this continent a new nation, conceived in liberty, and dedicated to the proposition that all men are created equal* 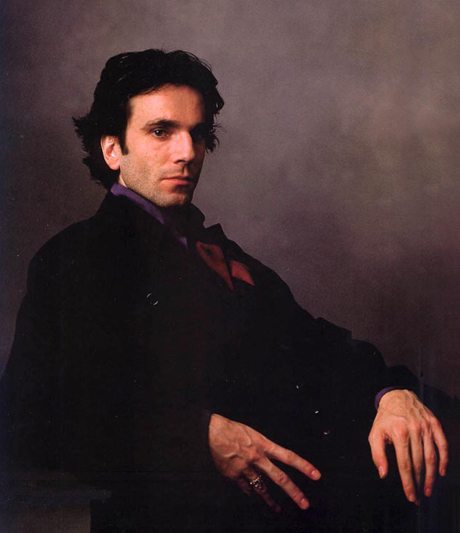 Daniel Day-Lewis (1957-) as Lincoln, arguably America’s most famous President must be for renowned American Film Director Steven Spielberg (1946 -) a perfect casting, one made in heaven. Abraham Lincoln (1809-1865), was one of the most insightful, intelligent, pro-active and measured leaders at a time in history when America, and the world, needed someone with great vision. He would think things out and talk things through, weighing up all the options with great care and responsibility before making ground-breaking decisions that would ultimately affect all humanity.

Just like in our time Stephen Fry was born to play Oscar Wilde and Benedict Cumberbatch Sherlock Holmes, there is no doubt multi-award winning performer Daniel Day-Lewis has the complexity, the ability, the depth of character and brilliance as an actor to portray this incredible man of history. Day-Lewis is a rare and gifted individual, whose abilities as an actor are often clouded by the media concentration on his celebrity status, with his personal life and eccentricities at times receiving far greater focus than his acting prowess. However his continually convincing performances, and the much-admired body of work that he has produced as a professional in his field, elevate him instantly into genius category. He is renowned for his ability to get into character, which he has often taken to extremes, damaging both his own health and well being, although not his performances. From My Beautiful Laundrette to The Unbearable Lightness of Being, In the Name of the Father, The Last of the Mohicans and There Will be Blood to name but a few, all have been highlights of the last 30 years in film and on the screen, in a world of entertainment.

His Johnny in My Beautiful Laundrette and his passionless fiancée Cecil Vyse in the delightful Room with a View were both triumphs. His splendid Hawkeye in Last of the Mohicans was brave and fearless, while his portrayal of Christy Brown in My Left Foot completely broke all our hearts. His Age of Innocence was so achingly elegant he made us all want to inhabit the world of late nineteenth century New York. His BAFTA Award for Best Actor for Gangs of New York (2002), his Academy Awards for My Left Foot (1989) and There Will Be Blood (2008) were richly deserved, as were the incredible pile of award nominations he has received during the length of his career. His Lincoln promises to be a personal highlight, because it fulfills two of his greatest passions, for that of researching and inhabiting the character of a man he was surely born to play. 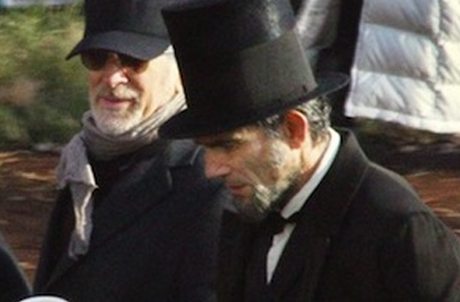 Abraham Lincoln achieved greatness through his words, his actions and his deeds, which were completely aligned. He stood for integrity, for honour and for fairness and championed liberty, justice and freedom for all.

Doris Kearns Goodwin’s book “Team of Rivals”, from which the screen play has been adapated, appropriately won the Lincoln Prize for best book on the Civil War in 2005. In an amazing endorsement, President Barack Obama noted not long after he was elected, that it was a book he would take to the White House with him. It concentrates on that period in Lincoln’s life when he was attempting to reconcile conflicting personalities and political factions, while endeavouring to bring about the abolition of slavery and being victorious in the Civil war by uniting all the American states. 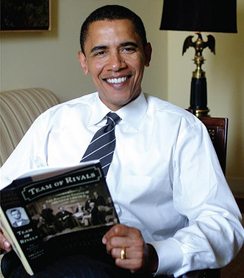 Goodwin amalgamated high school history with popular mythology, providing the perfect basis for a script so that multi award winning Director Steven Spielberg would be able to commission a screenplay from Pulitzer Prize and Tony Award Winning writer Tony Kushner, on which to base his film of her much acclaimed book.

The title refers to the men, who surprisingly became leading members of Lincoln’s cabinet and political family when he was selected. Rivals in the lead up to the election they were Edward Bates, who became the Attorney General, William H. Seward, the Secretary of State, Edwin M. Stanton, the Secretary of War and Salmon P. Chase, the Treasury Secretary, all of whom had often opposed Lincoln and his beliefs and views.

Keeping his friends close and his enemies closer, Lincoln brought them all on board, proving his greatness in recognizing that despite their not falling in with his ideas that they all had unique abilities to offer and community service to give. 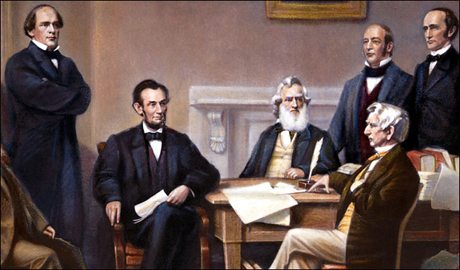 The Team of Rivals, Lincoln and company, playing the game of politics

The movie starts in 1860, the year when Lincoln gained the Republican nomination for Presidency and one year before his esteemed election to that great office. In New York of that year he also began his campaign for the presidency with a speech about slavery published in all four of New York newspapers at the time, which was widely read and discussed.

The technology of the time was far more primitive than we have today but the ideas he espoused were profound and sophisticated and people talked about, and debated them all over the country. They were not afraid of intelligence, but embraced it. Today we might have sophisticated technology, and the ability to disseminate the information on a far grander scale, however it can seem at times for many that interest and debate remains with a minority, which is not a form of cultural development or societal advancement, but a backward step. Let’s hope if this is happening that it is a trend we can avert.

Lincoln let the whole world know that he would never forget that the Civil War in America had involved an even larger issue. He stated his reasons movingly when he was dedicating the military cemetery at Gettysburg and people remembered his valiant words when he said,

‘that we here highly resolve that these dead shall not have died in vain–that this nation, under God, shall have a new birth of freedom–and that government of the people, by the people, for the people, shall not perish from the earth.’ 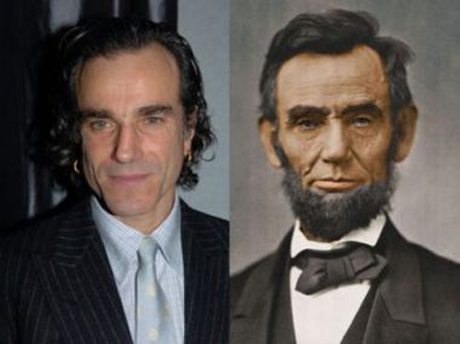 Lincoln was the American dream. He rose from humble beginnings to become a lawyer who went on to achieve the highest office in the land. He eloquently articulated his nation’s ideal’s, eventually ending slavery. He pontificated on what was necessary for achieving the greatest good, and wanted to put in place his vision for unity between the states.

His spirit and soul was nourished by the thought of binding up his nations wounds from the ravages of war and moving them forward together with magnanimity.

However that day in infamy, when his assassination at the hands of a misinformed misguided actor John Wilkes Booth took place at Ford’s Theatre, was a tragedy on such a monumental scale that it would affect that possibility, as well as many other outcomes.

That included his ability to ‘preserve, protect and defend’ his government and to deliver justice for all in a measured and intelligent way.

The evil deed was part of a wider conspiracy that also included murdering one of the four, the Secretary of State Seward and Vice-President Johnson. It took place following a day of celebration in Washington, as the civil war was finally coming to an end.

‘Persuade your neighbors to compromise whenever you can. As a peacemaker the lawyer has superior opportunity of being a good man. There will still be business enough.’ Lincoln left the world on the eve of unprecedented change, having provided a role model for great leaders that would remain unchallenged for a very long time.

The focus on screen however will be Daniel Day-Lewis as he brings his own great gifts to bear on the character of this historical man that Americans idolize, whose imposing sculpture of 1920 by Daniel Chester French (1850-1931) in Washington receives record numbers of nationals and tourists who view it no doubt seeking inspiration and hope.

The sacred Lincoln Memorial built to honour him and to surround the powerful statue is in the form of a Greek Doric temple, a wonderful and immortal setting for a man for whom true democracy was the holy grail.

Inside are inscribed his two famous speeches, The Gettysburg Address and his Second Inaugural Address, which have gone down in history as a benchmark for politicians who have come after. Today Lincoln is regarded universally as one of the greatest men to ever occupy the presidency of the United States and, even if all politicians in the world tried on his trademark black beaver top hat, now on display at the Smithsonian Institution in its collection of artifacts from the Civil War, they would have great difficulty appearing as tall as he did. “I leave you, hoping that the lamp of liberty will burn in your bosoms until there shall no longer be a doubt that all men are created free and equal.”**

Lincoln is in theatres in America Nationwide from November 16th

All other Quotes by Abraham Lincoln

Last week, as part of our June bride focus this month, we explored the world of gorgeous gowns and fabulous frocks. This week I offer some very handy tips on flowers for your special day. I had the pleasure of interviewing the divine Ms Susan Avery, of Susan Avery Flowers…