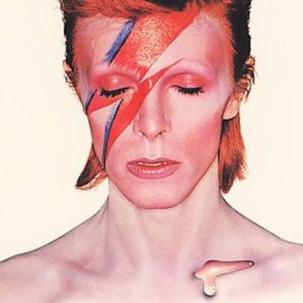 Renowned for his distinctive voice, intellectual depth and for creating a cult around himself that was all encompassing, the world at large will sorely miss the splendid fashion icon and modern dandy, who personified dignity, inspiration and style; the highly original Starman himself the late, great boy from Brixton in the UK David Bowie.

It was during the 70’s when Bowie first took the world by storm first – his was an amazing ability to appear androgynous and it was game-changing. He inspired dreams of reaching for the stars.

His life’s work and cutting edge artistry was influenced by and influenced wider movements in art, design, theatre and contemporary culture and his music looked how it sounded. Charismatic, with a star quality that shone from the very depths of his heart and soul, David Bowie proved the power of one for those who felt immense joy at encountering his generous spirit.

Bowie bedazzled fans with his ever shifting style and the innovative collaborative work he carried out with diverse designers in the fields of fashion, sound, graphics, theatre and film.

He even left this earth on his own terms, his final Lazarus video, powerful in the extreme was all about the art that was his life.

His original photography for the Earthling album cover, 1997 featured him wearing a stunning Union Jack coat which he designed in collaboration with fashion guru Alexander McQueen.

It provided a dynamic statement on modern English style, helping to break down ideas of its conservatism forever.

His sketches, musical scores and diary entries, reveal the evolution of his creative ideas.

A lot of tears will be shed as fans, followers and his family come to terms with his sad loss.

Sharing your many gifts and blessings you became an ambassador for, and proof positive that everyone, no matter their culture or background, can change their lives through goodness.

It’s now time to celebrate your life, as your passage through the world for those who encountered you meant they were enriched and enlightened by the experience.

Vale David Bowie – Thank you, those who respected you and your achievements will long remember you.

The imaginative capacity of human beings turning trash to dreams to make music is echoed in both The Possibility Project & OzHarvest, groundbreaking enterprises