By the mid eighteenth century at London newcomers were usually daunted when they finally breasted Highgate Hill and gazed down across the smoke and spires at London, the city that had risen from the great plague and the great fire nearly a century before. There were forest of masts of ships docking and sailing along the Thames.

This was the new age, of shipping and of building great canals from which emerged a new profession, the civil engineer. A canal was more than a ditch full of water, it was a marvellous feat of engineering that included tunnels, bridges, aqueducts and a system of locks built to connect the city with the country expanding commerce and connecting communities together for the first time. Dr Samuel Johnson and James Boswell who documented his friend’s life so we might know about him, at their Club

“Few things are impossible to diligence and skill. Great works are performed not by strength, but perseverance” said Dr. Samuel Johnson a distinguished Man of Letters, best remembered for compiling the first definitive English dictionary. George III (1738-1820) and Queen Charlotte invited actress Sarah Siddons (1755-1831) to come to Windsor Castle and read The Provok’d Wife and part of Catherine of Aragon’s speech from Henry VIII for them, although her most favoured and admired role was that of Lady McBeth.

Influential painter Joshua Reynolds exhibited his Portrait of a Lady at the third annual exhibition of the Royal Academy in 1771. The 1st Prime Minister’s son and man of letters Horace Walpole, noted it was ‘easy and very like’, recognizing a portrait of his friend, the comic actress Mrs Frances Abington (1737-1815).

She is depicted in the role of Miss Prue from Congreve’s Restoration comedy Love for Love in December 1769. In choosing to paint her Reynolds paid tribute both to her success in the role and her abilities as an actress. Siddons became renowned for her fashion sense and ambition, personal wit and cleverness, which won her a distinguished position in society in spite of humble origins.

It is an extraordinary painting; the image comes alive as she leans on the back of a chair, designed and manufactured by the great cabinetmaker to the elite Thomas Chippendale, in a pose appropriate only for the uncouth Miss Prue. 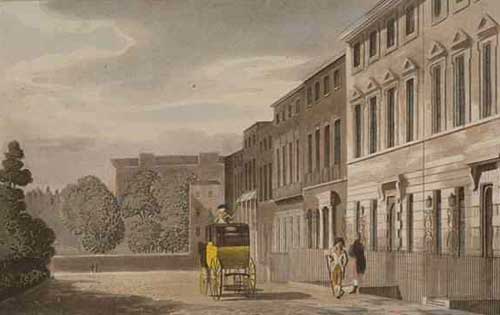 At London by 1760 there were long straight streets and beautiful squares, where the ground on either side was paved, not with gold as so many seem to believe, but with flat stones. This meant that you were finally able to walk alongside the street without any fear of being knocked down by coaches and horses. Lawyer, diarist, and author James Boswell, a friend and colleague of Dr Samuel Johnson was overwhelmed and exhilarated ‘when we came to Highgate Hill and had a view of London, I was all life and joy…my soul bounded forth to a certain prospect of happy futurity’. 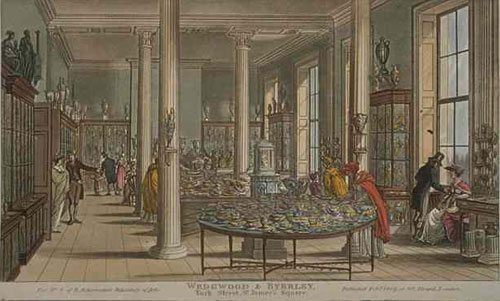 Arriving at London Boswell like many others would have roamed the city’s streets visiting the many different types of markets, eating and drinking in its taverns and sipping tea, coffee or chocolate in one of its stylish new coffee houses.

All the while he would have been marvelling at the mixed multitudes of people who made up this great metropolis. At night he would have spent his time attending clubs and assemblies, patronising the theatre and perhaps even endeavouring to seduce an actress. 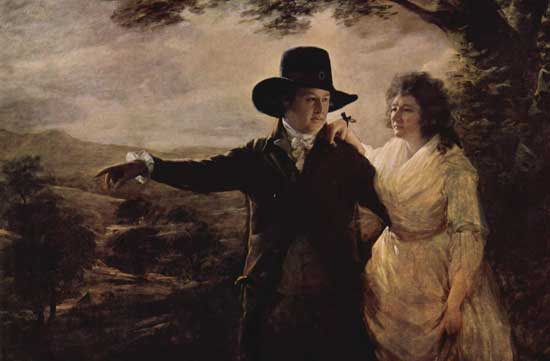 Out in the provinces Assembly Rooms were all the go for cards, concerts and ‘come as you fancy’ dress parties. Dancing and masquerades were also held regularly and the theatre thrived and grew more rapidly after 1750. Londoners of the eighteenth century were a fairly stuck up lot.

They saw anyone living in the country as only halfway human, even boobies. They were not able to believe that some people would choose to ‘live in one of those temples of dullness called country seats, where yawns are the form of worship‘. The answer was a great many people could, and did. And, surprise surprise they actually enjoyed it even if they were only about 15% of the whole population. 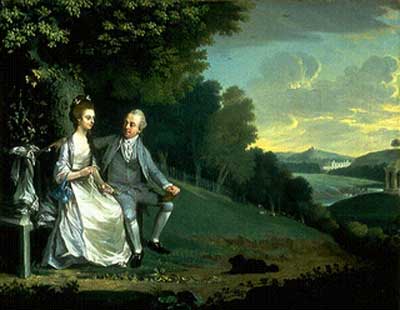 The Dashwoods of West Wycombe Manor

Eighteenth century gurus of taste considered the fine arts, painting and sculpture addressed the so called pleasures of the imagination individually, collectively and corporately. This was the time of the men who were making the modern world. It was the age of enquiry, when questions were being asked, such as ‘why do rocks fall’. This was when the Royal Society was renowned for supporting men of science.

Those with any pretensions to being one of the ton (highly fashionable) however lived for the fun and good times had in a London Social Season. For them it was far more than a place of streets and houses, derelict districts and aristocratic quarters and the fine arts. Its uniqueness for many being was that it was both a focus of aspiration and inspiration,

From the accession of George 1 to the end of the Georgian era in 1830 with the death of George IV novels and plays became popular reading and one of the major pleasures of life. This is the point when cheap, convenient pocket volumes were priced so that they came more within the reach of the ordinary people. This had many advantages for a great deal of people but it also meant that everyone had the chance of becoming a critic affecting the outcome.

London and its fame attracted all the best authors, the finest print publishers, the most talented of poets, mountebanks and medicos, and those seeking their fortune in an era that produced a great galaxy of amazing stars for the theatre. During the first decade of George III’s reign seats and boxes were removed from the stage so that the audience, for the first time was confined entirely to an auditorium. Between 1750 and 1800 about 500 playwrights were busily churning out world weary tragedies, comic operas and countless comedies. London actors, such as Mrs Siddons toured regularly. She often had a hard time securing lodgings, because of the puritanical prejudice against actors. However it wasn’t all bad.

George III (1738-1820) and Queen Charlotte invited actress Sarah Siddons (1755-1831) to come to Windsor Castle and read The Provok’d Wife and part of Catherine of Aragon’s speech from Henry VIII for them, although her most favoured and admired role was that of Lady McBeth.

I think there was never any player in my time so excellent – not even Garrick himself I owne it’. Actor David Garrick (1717-1779) was the man they all wanted to see. Audiences didn’t attend to see or experience Shakespeare’s Hamlet. They wanted Garrick’s Hamlet.

Studying for the legal profession at first, then as a wine merchant, it was in 1740 that David Garrick decided to apply his mind to preparation for the stage. His success as Richard III in 1741 was so great that within a few weeks of his first performance the crowds were flocking to an unfashionable East End playhouse at Goodman’s Fields to see him.

The Managers of Covent Garden and Drury Lane Theatres were so outraged at the outstanding success of the show they had it closed down. They were the only two theatre proprietors to hold a patent in London.

That meant if Garrick wanted to work he had to ultimately settle on aligning himself with one of these two. And so it was that in 1747 that David Garrick became joint-patentee at Drury Lane and from 1747 – 1776, the single greatest attraction of the London stage.

If manly sense, if nature linked with art;
If thorough knowledge of the human heart;
If powers of acting vast and unconfined;
If fewest faults, with greatest beauties joined;
If strong expression, and strange powers which lie
Within the magic circle of the eye,
If feelings which few hearts, like his, can know,
And which no face so well as his can show,
Deserve the preference, Garrick! Take the chair,
Nor quit it – till thou place an equal there…* David Garrick and his wife Eva by William Hogarth

Equally at home with tragedy, comedy or farce Garrick by his own efforts raised the status of an actor and made the profession a respectable one for modern celebrities to follow.

It was no mean feat holding an audience in the palm of your hand for nearly thirty years. His style would seem quite normal to us today, however it was new and strange for his own time.

He was able to express to the audience all the changes of passion that can affect a human heart so strongly. In 1756 Garrick invited Mrs Abington to come to Drury Lane and join his other actresses Mrs. Pritchard and Kitty Clive. She remained for eighteen years, reprising many famous roles. 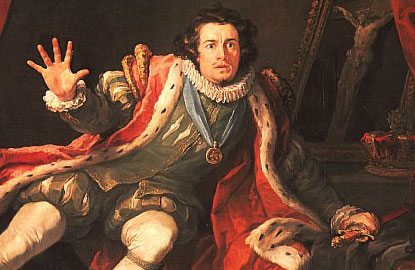 Contemporary accounts tell us David Garrick didn’t have to achieve success as an actor by tossing his arms about or strutting from side to side on stage. Instead he stood still, staying in one place and with his arms gently disposed, without stirring a hand or foot, would work through a scene of the greatest variety.

His eyes were felt to be particularly expressive by many of those who saw him and recorded his movements. He was by our standards good looking, with strong features and a great bone structure, which took artificial lighting well.

With ease the various passions I can trace
Clearly reflected from his wondrous face;
Whilst true conception with just action joined,
Strongly impress each image on my mind;
What need of sounds? When plainly I descry
Thee’ expressive features and the speaking eye
That eye, whose bright and penetrating ray
Does Shakespeare’s meaning to my soul convey
Best commentator on great Shakespeare’s text
When Garrick  acts, no passage seems perplex!* David Garrick, with William Burton & John Palmer in the Alchemist by Ben Johnson 1770

David Garrick moved among the most interesting people of his day. He and his wife Eva Marie Violett, a Viennese dancer were said to lead a happy life.

He was a member of Dr. Samuel Johnson’s literary circle and enjoyed the art of fine living. Garrick employed the most famous Scottish architect Robert Adam and was painted by among others, Thomas Gainsborough, Joshua Reynolds, William Hogarth and Johann Zoffany, some of the eighteenth centuries finest portraitists.

While he had his critics, his renowned versatility, his intelligent wit, acknowledged acting ability and progressive theatrical reforms brought him into great renown.

David Garrick improved stage lighting and made it invisible, although as we can imagine this was very difficult with just candles. He adopted a box style of set, a real room with doors to make an entrance. Costumes and setting gained far greater attention for he wanted to always get the historical detail right. Women it seems proved to be the only fly in the ointment. They wanted to wear ‘fashionable styles’ and so that meant a satin gown with sleeve frills and a powdered wig with a Gainsborough hat sporting lots of feathers just like Dorothy Jordan in the character of Hippolyta.

One is left to the pleasures of the imagination to picture in the minds eye an actress wearing all of that, plus lots of paint, plenty of powder and other allied artifices contrasting oddly with a robust lad wearing the correct toga of a Roman Coriolanus.