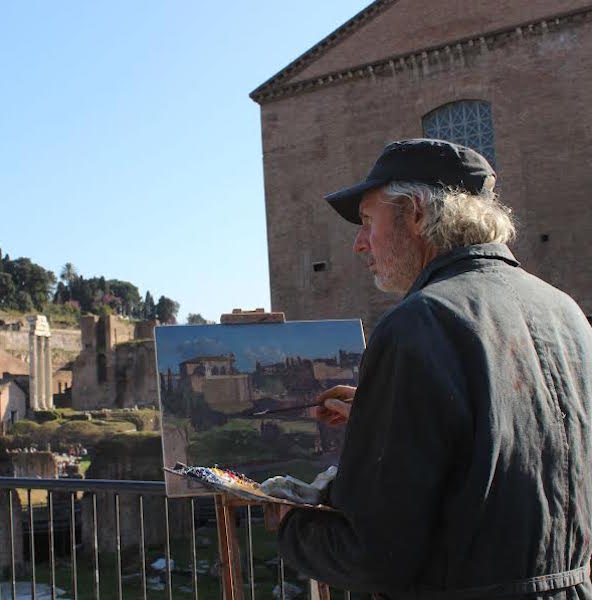 New possibilities and new moods season by season are particularly seductive to the human eye in Rome, Florence and Venice, at least to Australian born artist David Henderson.

His new exhibition David Henderson: Rome Florence and Venice will be opening in Rome on the 24th April – 3rd May, 2015  at c.r.e.t.a. rome, which offers residencies to visual artists working in all media.

The show will be opened by Counsellor Marco Salvio, Deputy Head of Commission at the Australian Embassy in Rome and held in the delicious Palazzo Delfini, via dei Delfini at Roma.

The Palazzo is a ‘Renaissance era palace in the old Ghetto district…’ said David Henderson, ‘… a plaque on the building says that St Ignatius founded the Jesuit order there. Most of the building is taken up by the Polish embassy to the Holy See” David said. It is a dream come true.

For centuries now artists, as well as everyone else, have been attracted to travel to Italy in a search for peace and spiritual rebirth. David Henderson, View of the Remains of the Roman Forum, 2014

To hold a show there for any artist must be very special.

As ‘romantic’ English poet Robert Browning said so eloquently, “Open my heart and you will see, Graved inside of it, ‘Italy’”

English and American grand tourists during the eighteenth century spent some five years of their lives travelling through France and Italy returning home via Switzerland, Germany, Austria and the Netherlands.

Inspirational Italy offer them all an opportunity to find out if theory and practice were compatible bedfellows.

It was an exciting prospect as all roads really led to Rome, its classical heritage was for all intents and purposes, civilisation as visits to Greece were the exception due to difficulties of travel and the drastic political situation at that time. One of the most important ‘treasures’ the tourists took back home as souvenirs were wonderful paintings by local artists to hang on the wall and remind them forever of their youth.

David Henderson is ‘concerned with the enduring characteristics’ of his subject ‘as well as with ‘fleeting effects’.

He is especially ‘attracted by Italy’s humanised landscapes and harmonious urban spaces’ he noted when advising us of this latest exhibition to take place at Rome, a wonderful achievement.

Painting in the terraced garden of the gracious Villa Gamberaia, a 14th-century villa near Settignano, outside Florence in Tuscany would have been a joy.

A celebrated Italian garden, with its towering hedges, shaped cypress and reflective pools of water, it is one of the few such villas left in private hands, its original design catering for the concept of ‘civilised’ living.

He is seeking to paint with vigour and vitality many of Italy’s most famous monuments, as well as some of its lesser known views each according to his own experience. What he is after is that elusive quality of the landscape of this ancient place that eighteenth century English gentleman recognised.

It is all about the mesmerizing qualities of its light whether either dancing deliciously on the waters of a Venetian lagoon at dusk on the water, the sculptural glory of the superb Fountain of the Four Rivers (Fontana dei Quattro Fiumi ) in the Piazza Navona at Rome, or as it shimmers gloriously at sunset under the bridges over the waters of the River Arno at Florence.

The Age of Reason in Europe was much like our age, seemingly preoccupied with self examination and multiple mirrors reflected with merciless clarity the world which amused or intrigued. The finest guide for travellers to Rome when the first American grand tourist Joseph Allen Smith went there was still the one written in 1554 by successful 16th century Venetian architect Andrea Palladio. Entitled Le Antichita de Roma it described the buildings of the city in ancient times.

Smith was exploring the possibilities of a proposed diplomatic career and his passion for the art of antiquity gave him a unique position in society as one who made the connection between American and European enlightenment.

As might be expected of an architect of Palladio’s reputation the guide was closer to the original Roman buildings than any other when viewed through his eyes.

It is just one of the reasons Palladio exerted such an amazing influence on the course of world architectural history, especially for the young men of England’s ‘Georgian’ age (1714-1830). ‘Oh, Italia‘, wrote the romantic poet George Gordon Byron 6th Baron Byron (1788 – 1824), ‘thou hast the fatal gift of beauty… the orphans of the heart must turn to thee’.

Many English ‘orphans of the heart’ went to Italy including England’s Elizabeth Barrett Browning (1806-1861) who eloped with fellow poet Robert Browning (1812-1889 and settled in Tuscany, where she remained forever, buried in the English cemetery at Florence.

The poet John Keats (1795-1821) who tragically died so young is buried at Rome where his epitaph says “Here lies one whose name was writ in water’. David Henderson has had an interesting journey from Queensland, which all started when he acted on his passion to travel to Italy to paint on a regular basis from 1981.

Today he divides his time between both places, because he finds ‘her subjects are inexhaustible’.

He’s not the only one entirely captivated by the elusive light, which certainly seduced my senses for all time during my visit.

It is not just about the wonderful decaying architecture of human proportions whose glorious washed matt colours are faded in the heat of the sun into a warm and inviting palette that entirely beguiles.

It is also about the place that first qualified our minds to think justly, to admire a love of truth, and where we first became infused us with the ideas surrounding what it means to be free.

Italy’s ideal painter from Rome to Renaissance was a master of theory and practice, not either or, but both and. One objective was to extend the view of the observer to bring about a refinement of taste. For David these truths are integral to his process and certainly extends our own experience of his work as we view it.

After completing his studies in architecture at Brisbane David spent four years in London at the Royal Academy Schools, where he graduated in 1985. Since then landscape, portraiture and the figure in interiors have been his principal subjects as he searches for that often-elusive ‘synthesis of light and form’.

David’s paintings can be viewed with satisfaction in the perspective of observation, sentiment, and meditation where each encounter with the poetry of his palette is deeply personal. “As Italy is further from the equator than Australia, light at this hour lasts longer. This means I have a greater window of opportunity to depict it – to get it down on canvas before the day ends.” David observes.

How wonderful, nothing like having a show both at home and abroad.

David together with Susannah Fullerton, President of the Jane Austen Society of Australia will also be leading a tour to the Literary landmarks of Northern Italy in 2016 for those seeking to see it through a poet and artist’s eyes.

In his ongoing search for new truth always David Henderson is particularly drawn to the “… subdued harmony of evening, when the low sun casts surprising patterns of light and shade, and its mellow warmth seems to coax the colour out of objects” Light, atmosphere, architecture and art are always at the very essence of his work. WOW, was all I could say when I viewed the trailer for The Borgias, the next blockbuster from Showtime, which brought us The Tudors, one of the most fabulous television series of all time. This new series will star one of my all time favourite actors, Jeremy Irons, as Pope Alexander VI (1431 – 1503), best known for his corrupt rule. What he lacked in morals he made up for by trailblazing intrigue with a capital I.