‘Oh, Italia’, wrote English poet Lord Byron, ‘thou hast the fatal gift of beauty……the orphans of the heart must turn to thee’. Since 2005 Australian artist David Henderson has remained a captive to the light in Italy. He has spent much of his year in the famous water bound city of Venice, evaluating and recording on canvas the pattern of shadows created by the low autumn sun and the misty magic of its morning and evening light. “Cities, interiors and places which bear the imprint of humanity interest me most, and to my mind Europe, and in particular Italy, is the most exciting place to do this’ said David.

David Henderson’s latest collection of works will be on view at his 2013 exhibition, which will be held in the Villa Mulberry Gallery in Shipley Street at South Yarra, Melbourne opening on 19th March and continuing daily until 25th March. They document his 2012 journey to Europe, most especially his sojourn in Venice and also at Istanbul where heaven meets earth.

The faded architectural splendour of Venice remains David’s primary subject as he continues to “rework” vistas of this richly embellished city that he has been so passionate about for more than 20 years. Venice is still called La Serenissima (The Most Serene Republic), a title first bestowed upon the city by a Pope during one of the rare periods when Venice and the Pope were not at war with each other.

Its history of 1100 years is littered with warring, plotting of wars, profiteering from other nations wars and counting the loot brought home.

Venice has proved the perfect laboratory for David to investigate the expressive properties of light and tonality. “As an out-of-doors painter I depict all kinds of light according to the season, weather, and time of day – each has its own character,” he explains.

“I’m drawn to the subdued harmony of evening, when the low sun casts surprising patterns of light and shade, and its mellow warmth seems to coax the colour out of objects” he says.

“As Italy is further from the equator than Australia, light at this hour lasts longer. This means I have a greater window of opportunity to depict it – to get it down on canvas before the day ends.” says David. The Rialto area of Venice has been the financial and commercial centre of Venice for centuries and it is accessed across the famous Rialto bridge. It is the place that the ruthless Jewish usurer Shylock in William Shakespeare’s Merchant of Venice asks “What news on the Rialto?”

Every morning, from Tuesday through Saturday, tons of fresh fish and seafood destined for the tables of its many famous cafes and restaurants and for the slightly less than sixty thousand resident Venetians, is sold at the Venice Rialto market.

The decorative design style from Byzantium, an ancient city sited straddling the Bosporus strait where Europe meets Asia, influenced the ecclesiastical architecture of Venice, because it was of the main cities they traded with for centuries. When married with the Gothic style of Europe it achieved a unique and distinctive Venetian style.

In 2012 David extended his annual trip to Venice to include this former exotic historic city now known as Istanbul.

David noted that the historic former Turkish capital was richly evocative and atmospheric and his forthcoming exhibition includes three watercolours painted there in December last year. It was the Roman Emperor Constantine (272-337) who located his new capital in the East at Byzantium, determined to make it another Rome, although far more magnificent if possible than the old one. 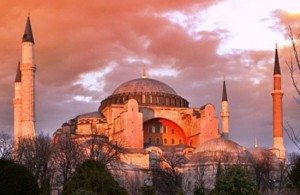 The Church of Haghia Sophia at Sunset had new additions, including minarets to make it a mosque following the Islamic conquests of 1453

Under his direction Constantinople became unquestionably the leading centre of a culture that paralleled the Middle Ages in Europe in the East, providing ‘a golden bridge joining East and the West’.

This referred to art, no less than to any other sphere of activity.

The sights, smells and sounds enveloped David who, despite it being winter, painted ‘en plein air’ recording some of his own lasting impressions.

When the town of Byzantium, was renamed Constantinople by Roman Emperor Constantine in the 4th century it became the chosen capital of the Roman empire in the east.

Along with its transformation into a religious centre went the attempt to transform the city itself into a ‘New Jerusalem’, an image of Heaven. The Church of Haghia Sophia was the crowning glory of the city before the conquest of Islam in 1453. The Sultan Ahmed Mosque, popularly known as the Blue Mosque because of the blue tiles adorning the walls of its interior was built between 1609-1616 and is considered to be the last great mosque of the classical period.

It borrowed a few elements of its style from the former Christian Church of Haghia Sophia nearby and produced a building that is a symphony in design in traditional Islamic architecture.

Pope Benedict XVI visited the Sultan Ahmed Mosque on 30 November 2006 during his visit to Turkey. It was the second papal visit in history to a Muslim place of worship. Having removed his shoes, the Pope paused for a full two minutes, eyes closed in silent meditation.

Then, standing side by side with the Mufti of Istanbul, and the Imam of the Blue Mosque the Pope “thanked divine Providence” and said, “May all believers identify themselves with the one God and bear witness to true brotherhood.”

David Henderson has a studio at Albion in Brisbane, Queensland from where he teaches painting, drawing and art history. For the remainder of the year he travels, tours and paints.

David has been leading Australians Studying Abroad tours since 1996 and has had many adventures as tour leader and guest lecturer, which perfectly suits his life as an artist who loves to share his work and experiences

Soon after his 2013 solo exhibition in Melbourne, David heads off on a tour of gardens in the Italian lakes and the south of France with ABC presenter Sabrina Hahn in April-May.  He hopes also to spend time in Venice, Istanbul and Israel. His solo exhibition at Brisbane will be held from the 23rd August – 1st September at the Graydon Gallery, New Farm. The gallery is sited within the Botanical Art School of Melbourne. The exhibition Japonisme: Japan and the Birth of Modern Art will draw from works in the NGV collection to be showcased NGV International 25 May–28 October, 2018