Fabulous Channel 9 Today show’s Lisa Wilkinson arrived wearing DJ’s trademark black and white, the night was set to be a glamorous insight into what trends will dominate our cooler months.

Top trends would turn out to be leather, layering and leopard, everything that I love! Guests were treated gloriously to the warm wintery flavours of truffle and gruyere served to the tune of Bollinger champagne!

Johnny Seymour ensured the event was all class with his eclectic mix of globally recognised sounds, custom mixed for the runway. Then there was the menswear spokesperson Jason Dundas and the fabulous face of David Jones Jessica Gomes, who was rocking a fierce plumb lip!

Winter will be a wonderland of style this year.

The set transported guests into a woodland forest, with a twilight, fairytale feel, which worked beautifully with the sensational designs on show. There was stunning Laura Mercier make up for the models under the direction of Artistic Director, Oralie Mayam

The colour palette across the majority of the designers featured white, black, chocolates, aubergines, pinks and greens. The David Jones fashion stable is an eclectic one, but viewing the show it had great harmony.

The relaxed vibe of unisex labels Bassike, Jac&Jack and Zanerobe for the guys, had you feeling all slouchy with muted palettes, soft knits and divine cottons. The key to working this style without looking like you just rolled out of bed is the cut, and these labels show that, in spades.

The funnel neck is a strong look for autumn winter.

Ginger and Smart opened with Gomes wearing a fantastic leather bustier teemed with a pencil skirt, finished with a (fake) fur trimmed cape.

A major theme throughout the whole show was the bustier.

Plunging, straight across, leather or embellished, it seemed the majority of designers featured this piece that has its origins in historical women’s lingerie.

Yeeks! Carolyn says she can remember when French haute couture and Pret-a-Porter fashion designer Jean Paul Gaultier brought this former corset out of the closet again in 1983 and turned it into a beguiling bodice.

And then I remember when in 1987 British iconic designer Vivienne Westwood symbolically freed females from oppression and transformed this former torturous object into a form of female empowerment! Camilla, usually associated with kaftans and beach wear, showed floaty leopard matched with skull prints (a la McQueen) and some fab embellished suiting for the gypsy in us all. 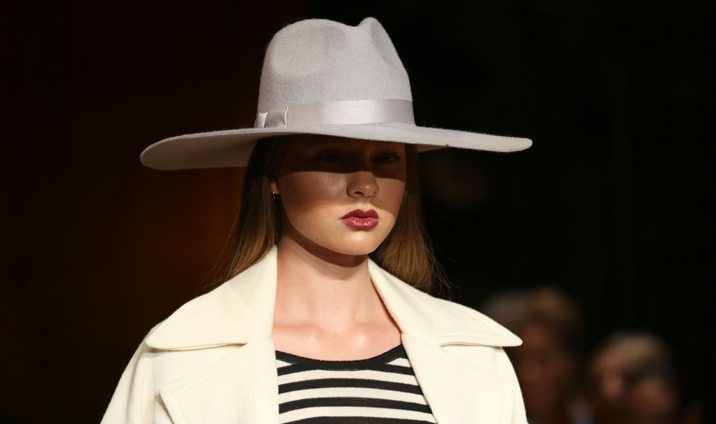 I loved Romance Was Born.

I felt they have a very 1940’s vibe even a little Ossie Clark influence going on.

Super shapes and a softer colour palette than they usually go for, this could be one of their more commercial collections.

Trelise Cooper and Akira show that an eye to detail is always a winner, and Easton Pearson had fab fabrics and a ’60’s Palm Beach vibe.

Alice McCall was fun and fresh with an Art Deco influence and Lover continued their affair with lace. Josh Goot was all about colour blocking, digital prints and striking hemlines while Carl Kapp had superb suiting and a strong shoulder. Rachel Gilbert, Carla Zampatti and Collette Dinnigan proved to be the queens of class.

Divine sequins, sublime fabrics and shapes were the order of the day.

These ladies know their market.

It is just a shame Dinnigan is hanging up her high end label to concentrate on Collette by Collette Dinnigan.

At least we will still have access to her initiate style.

Fresh from a showing in Paris and a controversial legal battle between Kym Ellery and Myer, which saw the brand being stocked at both Myer and David Jones till 2015, after which exclusivity falls to DJ’s.

She showed why her label is in hot demand. Closing the show was brother and sister duo, Camilla and Marc with a stunning presentation of their glamorous new season’s collection Fresh white on white, fabulous cut pants and bustiers led into grey python with a pop of fuchsia.

Skirts with either a tulip or skater shape, black and white and leather.

The wardrobe staple, the little black dress proved once again this team have their finger on the fashion pulse.

Throughout the evening the runway was filled with rising new stars of the modelling world. The dynamic duo Jordan and Zac Stenmark arrive for the show So the low down on autumn winter dressing Australia 2014. Key pieces to add for this season are;

A fitted long line bustier.
A pencil skirt.
Anything leopard.
A luxurious leather piece.
Maybe a pencil skirt in leather
An oversized embellished clutch for day or night.

Personally, I am excited by this seasons sartorial prospects, Just can’t wait to add a little opulence to my wardrobe.

Join me next week for tips on clearing out you wardrobe to make way for your new purchases! You can watch some highlights here

Click to Watch the Whole Show at David Jones