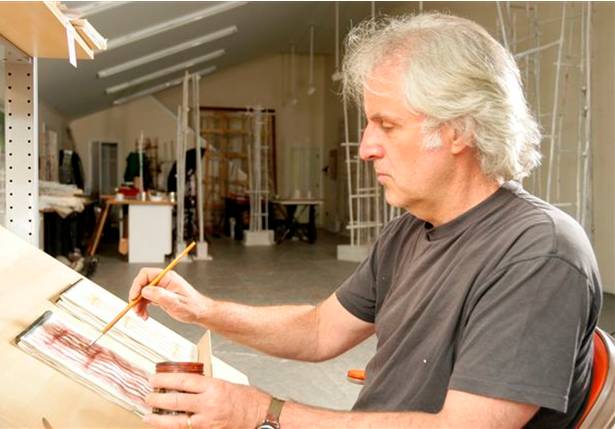 Born in Devon in the south of England, coming to Australia as a small child and leaving to live and work in New York aged 33 in 1989, contemporary artist David Rankin has enjoyed his adult lifetime in the world of art.

A survey of historic works from the 1960s and 70s chosen by the artist to celebrate fifty years in the field, is on display at the Charles Nodrum Gallery, Richmond in Melbourne, running concurrently until September 2, 2017 with a selection of his recent works at the Mossgreen Gallery. At one point of the very animated opening evening filled with serious collectors at the Charles Nodrum Gallery, the work Louth 1 painted in 1969 of acrylic on board, attracted much interest with its ‘active points of energy’, like large pebbles in a stream.

It may have been the smallest in size of the works on offer, but it did catch the eye of a small coterie who gathered to discuss and view it on a wall in the corridor leading to the main room, where the majority of the works were on display. A friend confessed to loving it and I urged her to purchase immediately – don’t hesitate. However she was already too late, suddenly the representative from the gallery loomed up and placed a familiar red dot next to it, meaning the work had been sold.

Artist David Rankin was searching for his own sense of place when he painted Louth 1, which was perhaps the most important focus for any young creative who hoped to embrace success during their lifetime.

Having a place to be centres, focuses, stimulates, inspires and rewards. Just thinking on the concept brings to mind the words… ‘…We shall not cease from exploration, and the end of all our exploring will be to arrive where we started and know the place for the first time’. * Living at Bourke in the outback of NSW in tough conditions, David Rankin brought beauty into his own life as he gradually became aware of the nuances of colours and the diversity of shapes and forms in the natural and built environment. Representing the ‘vitality of things’, he set out to capture them forever in his work.

Serious yet stimulating I remember at the time they provoked my inner most thoughts to a point where I realised they represented much more than the never-ending circles of experience present in life. This boy who had become acclimatised to the Australian bush in which he often ‘wagged school’ discovered “the joy in painting could be a tool to explore the world… and your understanding of what it is to be human”. **

Integral to the style of the contemporary works that first captured my interest when visiting galleries all over Sydney during the late 60s and 70s to inform my own thoughts and experience, they offered a fresh perspective and point of view.

It was at a time when the influences from indigenous art and other cultures began to have an impact on a new generation of artists, who were seeking to balance senses of identity and spirituality with a love of nature.

David Rankin was one, and his works then and now are both challenging and contemplative because they are so thoughtfully considered.

Australia’s isolation, two world wars and a prolonged depression had taken its toll on the human spirit. Sydney in both the history of art and design was at the time a virtual wasteland, begging to be brought into the twentieth century.

Bigotry abounded and it is no surprise many artists, both visual and performance, left their home shores to find a new place to be rather than stay and be brought down by a prevailing attitude that they shouldn’t rise above their station in life.

Changes in attitude were still a way off, needing to be brought to fruition if Australia was to remain the so-called ‘lucky country’ and also seen to be progressive on the world stage.

Energised by the works surrounding me and the happy crowd, I went on a search of the installation at the Charles Nodrum Gallery endeavouring to discover if I had been going to take one work home, which one it would be.

A wondrous work I discovered late during the time I was there, caught and held my attention. A Time of Silence painted in 1972 effortlessly linked David Rankin’s works past and present. For me it reflected the importance of valuing rare and precious moments in a very busy world.

Rankin related to the collectors, visitors and friends gathered about how having a career in art came to fruition for him by first being encouraged by his primary school teacher.

Having already detected his pupil’s talent for drawing well, he decided to help expand his horizons gently by encouraging him to look to the world beyond his boundaries.

Catering to David’s inherent curiosity, he gave him a biography to read about, the life of one of the most famous of all artists in history Polymath Leonardo da Vinci (1452-1519).

A true Renaissance man whose passion for knowledge was only exceeded by his desire for more, da Vinci sent a loud and clear message to all the artists who came after him that enlightened observation was a pathway to truth.

In every age art and good models give birth to ideas by exciting the imagination. Rendering strokes of genius, David Rankin approaches his canvas with the spirit that also motivates a prophet delivering his message.

He lapped up da Vinci’s lessons and it is evident in every aspect of his works. They explore the pictorial possibilities of ideas gleaned from his observations and his informed knowledge of a number of different cultures both intellectually and spiritually. Art is also a medium for the expression of truth. While we can admire technical skill, it is the spiritual meaning hidden within the work that emboldens us to know we are in the presence of an ever slowly resolving mystery.

David Rankin departed from convention and tradition to depict his subjects in a universe exceeding the boundaries of what the eye could see.

He started along the pathway to his career in art at a time when people were bringing civil rights into modern focus, generating enormous wealth in the arts, manufactures and commerce, while championing charitable causes for the greater good not just their own. Science and technology were also advancing way beyond what was previously imagined.

Going to university wasn’t yet the norm – fees were high and not subsidized by government. The system while elite was also elitist and to be a success you also had to look like one. Australia by the early seventies was a kaleidoscope of paradoxes, a western democracy where birds laughed mammals laid eggs and everything familiar seemed somehow altered especially for those who came here first from Britain as convicts, or those who came after as free settlers and immigrants.

It was a place where the emerging generation would try to see beyond local bigotry, prejudice and often cruel or oppressive patriarchal oversight, to enact societal and political change for the better.

Life needed to go beyond the scent of eucalyptus in the night air, the glint of the sun on iron roofs, the renewing waters of raging rivers and the golden light of sandy beaches in a land trodden on gently by a caring people who had lived here for sixty thousand years or more. Gundabooka – early day, 1969 acrylic on board 91 x 122 cm, courtesy of the artist and Charles Nodrum Gallery

For the artist this meant using their eyes not only as a window to the soul, but also as a doorway to a whole universe beyond, one in which the image became greater than the word. To begin you had to study hard and retain your curiosity, while continually seeking to expand your own horizons by reading widely.

David Rankin became a success at home but reached a point where he knew he had to take action and so left for New York “…to make big mistakes and not feel like there was an audience around me who had built up expectations of who I was and what my work was” he informed writer Dore Ashton, who published a book about the artist; David Rankin The New York Years in 2013.

He wanted to be emboldened by his exposure to a much larger world, one in which he would be able to devise his own language to progress his art, one he has today become very fluent in expressing. Interestingly David Rankin has in the prime of his life and with his wife successful novelist Lily Brett, ended up on an island much smaller than the one he left behind.

Shelter Island lies nearby to New York and his studio is an idyll if you like, a place where his life and work pulsates with the colour, atmosphere, enthusiasm and thought provoking meaning he has invested in his art.

During his New York Years the series he has produced reflect not only his growth in self-esteem but also his ability to express what the eye cannot see, brilliantly.

By example Leonardo Da Vinci ensured that some artists would be aligned with creative intellectualism David Rankin is one, and his thoughts and experiences of life are revealed with great depth in his work over time. Contemporary art is about transformation and its currency challenges the past to help forecast the present in a fresh and exciting way. Today David Rankin retains a glint in his eye and his keen observation of people. His enthusiasm for what is ahead and the world around him fills him with energy.

He continues to fuel that inner spark, which has for so long served him well. It allows him to continue to reveal yet more and more about the wondrous adventures in life we can all seek to enjoy, if only we have the courage of our convictions.

“What we call the beginning is often the end. And to make an end is to make a beginning. The end is where we start from”. *

Spend the Australia Day long weekend celebrating Melbourne’s art, architecture, design and performance by exploring Melbourne Now at the National Gallery of Victoria. ENTRY IS FREE. Their two divisions. The NGV International on St Kilda Road and NGV Australia at Federation Square are open on Monday 27 January, 10am–5pm and…