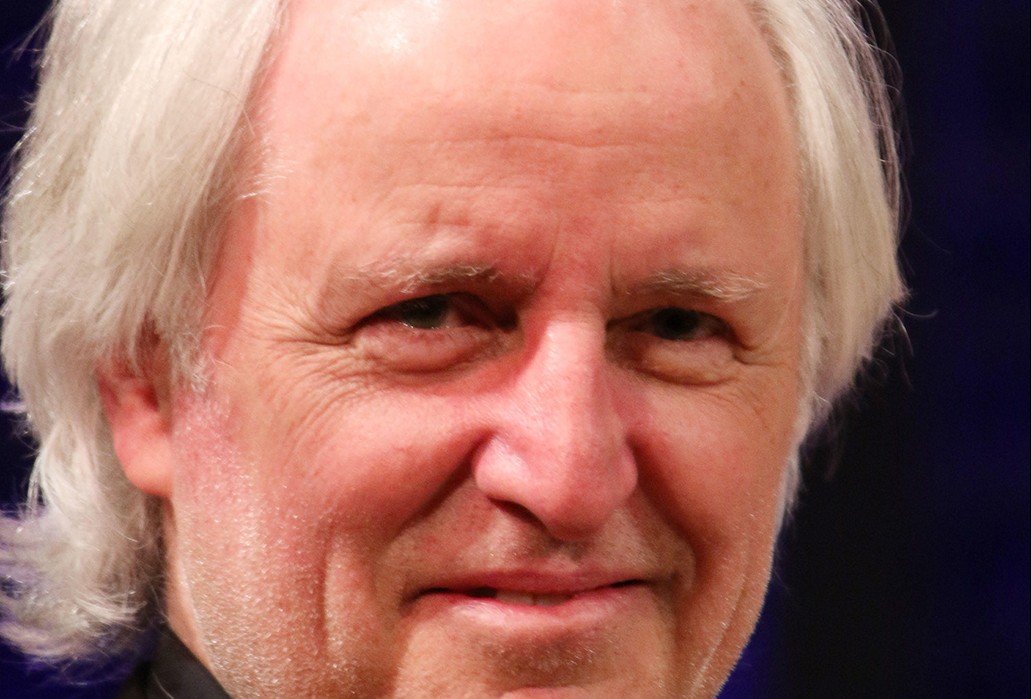 David Rankin, Australasian artist it would have to be said, has achieved great success locally and internationally and both stylishly and with great élan.

Bursting forth with life, both animated and extraordinary, his images have the ability to guide us into his personal world of abstract thought and meaning. They always leave me eager to encounter so much more. 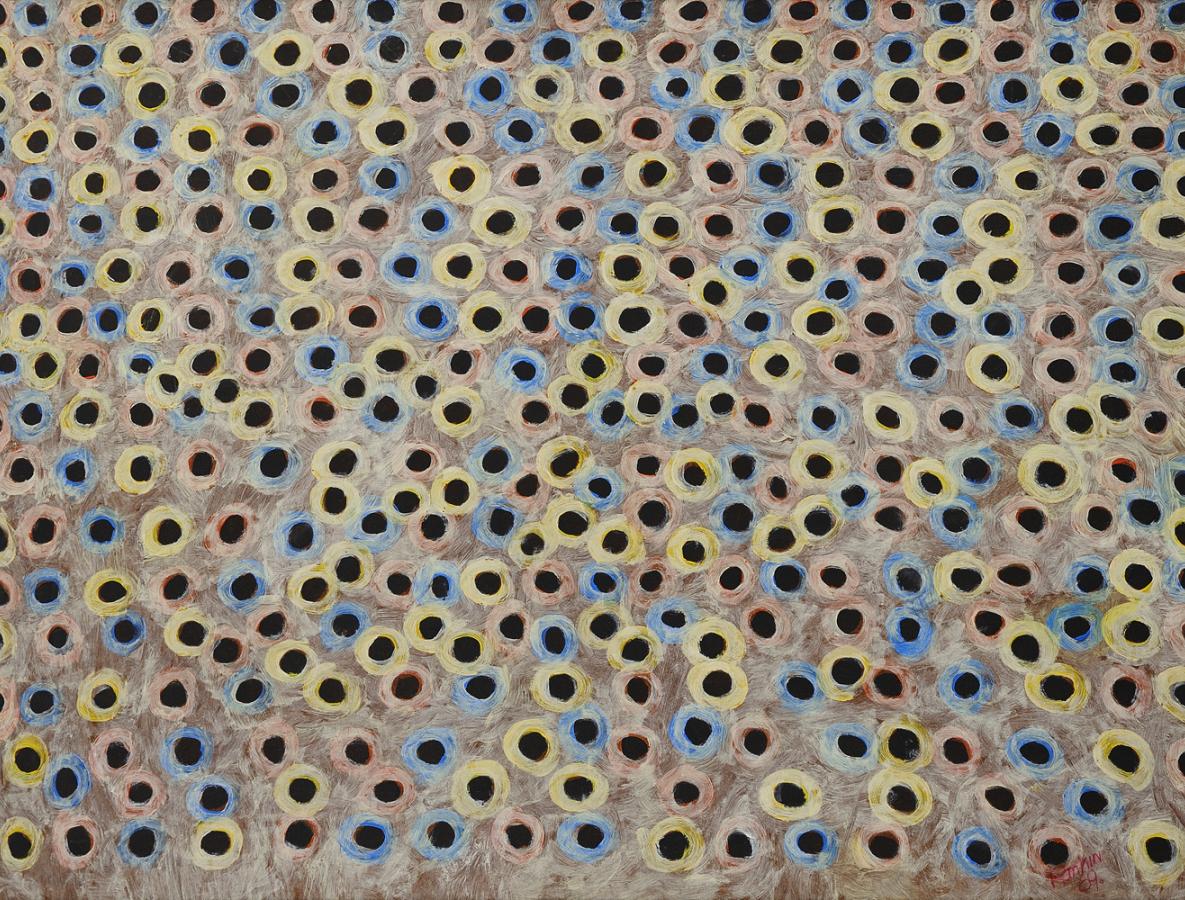 Gundabooka – early day, 1969 acrylic on board 91 x 122 cm, courtesy of the artist and Charles Nodrum Gallery

Like all of us in life, our history and our journey through it matters. During his youth, David Rankin was one of the first Australian artists who alerted me to the possibilities and endless inspiration of art in our lives.

He has it seems to me, had throughout his own journey, a fire raging deep within his soul. It is one that defines who he is as a human being and as an artist; a walking, talking, generous and caring poet of the heart.

In his field of expertise success depends on quality; the excellence of production and meaningful expression according to the aesthetic principles, which reflect that the work is of more than ordinary significance.

Currently in early spring, David Rankin has two exhibitions running in Melbourne and in Sydney, both of which may be smaller in scale than he’s used to, but massive from my point of view; moody and evocative.

They simply ooze merit, while offering his friends, followers or those coming new to his work, a broad-based viewpoint of his journey 1968 – until today. 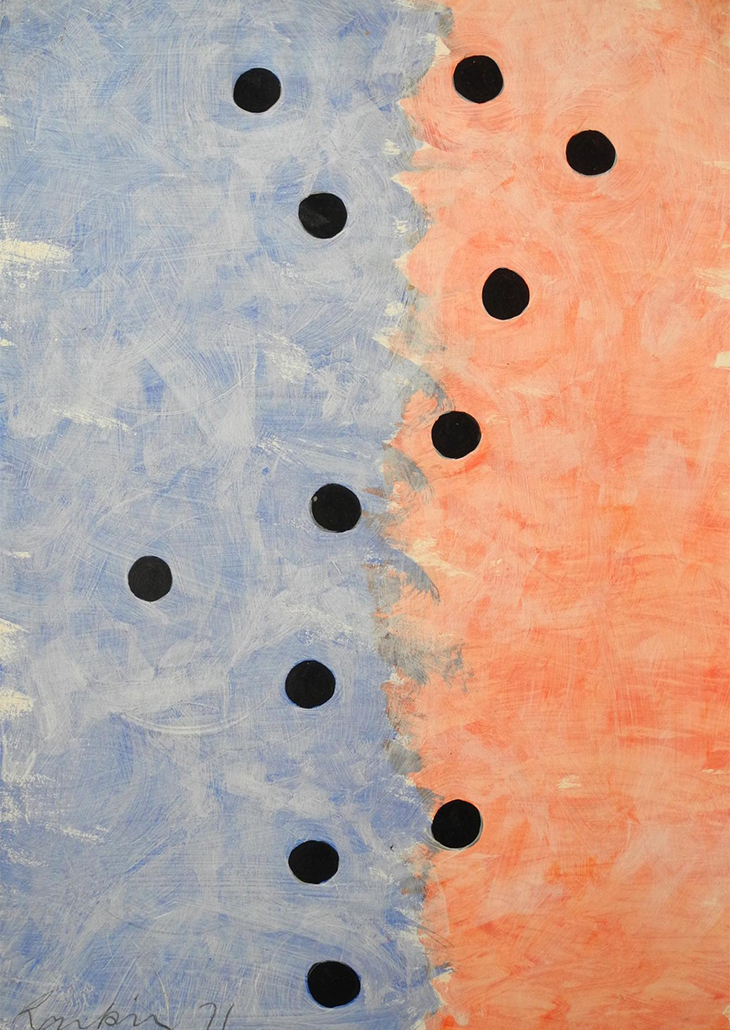 They are all works that when seen through his mind’s eye, reflect his innermost thoughts.

When I entered the first showroom at Charles Nodrum Gallery, Melbourne over the weekend, I found myself drawn interminably back to my personal memories of this artist and his beginnings during the late 60’s in Australia.

This is not surprising, for it is at that time when I encountered his ever evolving art for the first time. His Two people strolling (1971) reveals to me two independent souls, who at first glance may seem out of step but are in fact friends, superbly in tune living complimentary lives while setting each other free.

Both born during the 1940’s, by the time David Rankin was making a name for himself, I was a budding interior designer. The local gallery often showed his works and although we didn’t meet in person at the time, it soon became clear to me in viewing them, ours was a meeting of the minds and heart.

They encouraged and inspired me to go way beyond the boundaries of my own experience to that point in time. When we finally met in person for the first time, it was interesting to discover down the years we have enjoyed many similar experiences of the cultural influences pouring in from overseas affecting our outlook on life.

Most especially the calligraphy, ceramics and timeless ethereal landscapes and cultural impact of Japan and China, certainly among the influences at the essence of my passion. An association of water when it interacted with other elements in nature were the most powerful for me. However, living as a young man in deep outback Australia, for David Rankin it was the contrasting textures of the natural elements coming together to make up this great wide brown land, which became infused within his consciousness.

And powerful they were too. The local indigenous art he was encountering first hand was bursting forth with a new language as Australia’s first peoples left behind the very early days of their appealing and very ancient rock art and took a new road ahead.

They suddenly began attracting attention as urged on, they took on the western idea of painting and made it their own, but with a new twist. It was all very exciting and inwardly rewarding. Indigenous artist Albert Namatjira was already a giant, a legend, painting the outback landscape as he knew it; a dreamy version of gentle beauty.

Then followed those I admired like Emily Kngwarreye (1910-1996), who created her own distinctive colour filled style. Both Clifford Possum (1932-2002) and Lin Onus  (1948 – 96) were both influential, the latter wittingly mixing Scottish and Aboriginal heritage to present his own unique perspective on the world. 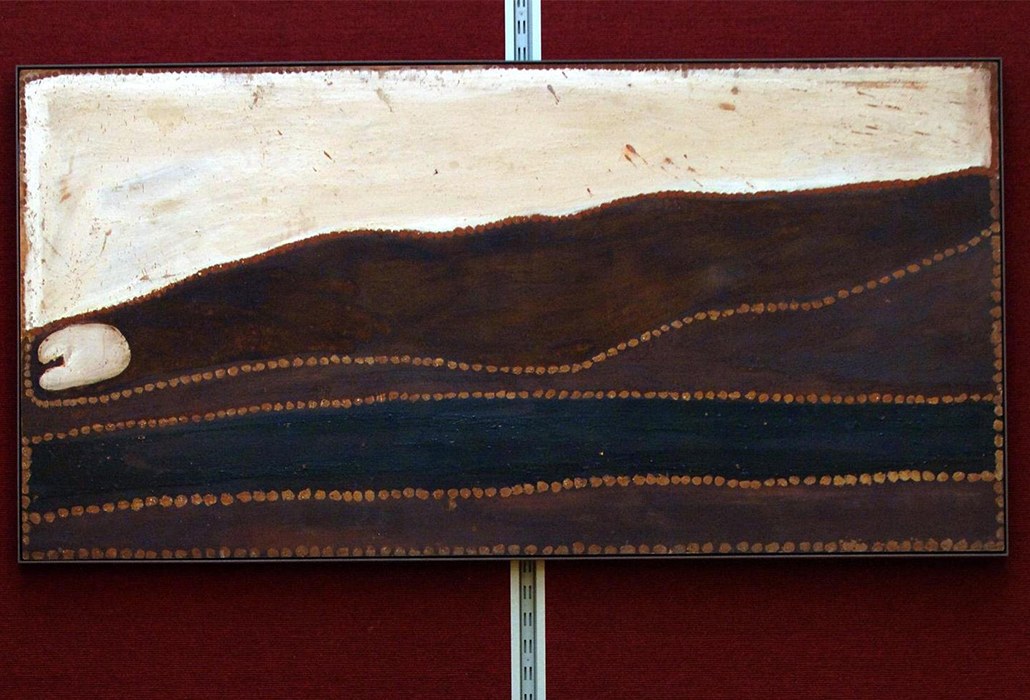 There were others too, but it would be Rover Thomas (1926-98), who I am happy to admit, became the indigenous star on the top of my celebratory tree of life. 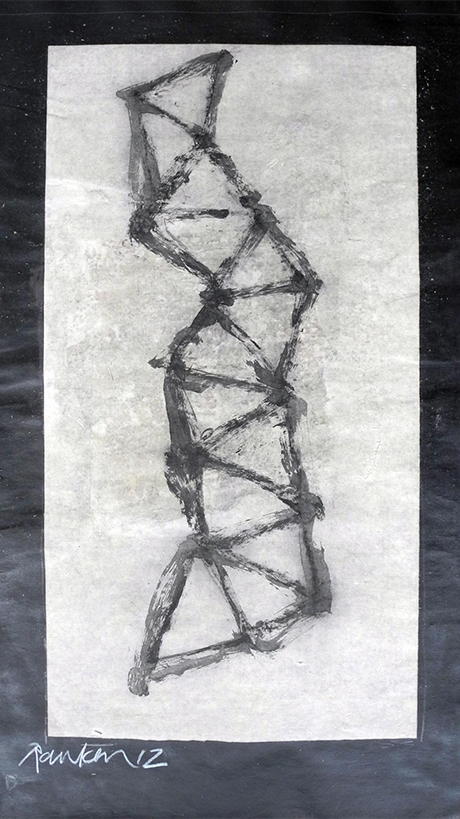 But then, just as dramatically from re-visiting so many thoughts, I find myself observing David Rankin’s next work and I am suddenly thrust forward in time to the here and now.

His dancing figure of 2012 most certainly makes me want to dance as if no one is watching; uninhibited and free.

The older works and newer works are presented together, the displays contrasting and surprising in so many ways.

Art certainly has the power to elevate the spirit and soothe the heart. While I am lost in thought, my son who had accompanied me, wandered between rooms examining each of the works with his own eye.

He commented when we came back together, on how he was being drawn to Rankin’s early works. He pointed out how much he admired Wandering Mind and Willow Eyebrows, the latter particularly providing us both with an emotional experience of inner calm.

Then as we left, David Rankin’s 1968 work Hillside Script caught his eye and once again he was left feeling challenged to broaden his horizons.

Because of its date, the work also drew me back to the year his brother was born on the very day our family was celebrating his fiftieth birthday. So much has happened since then. 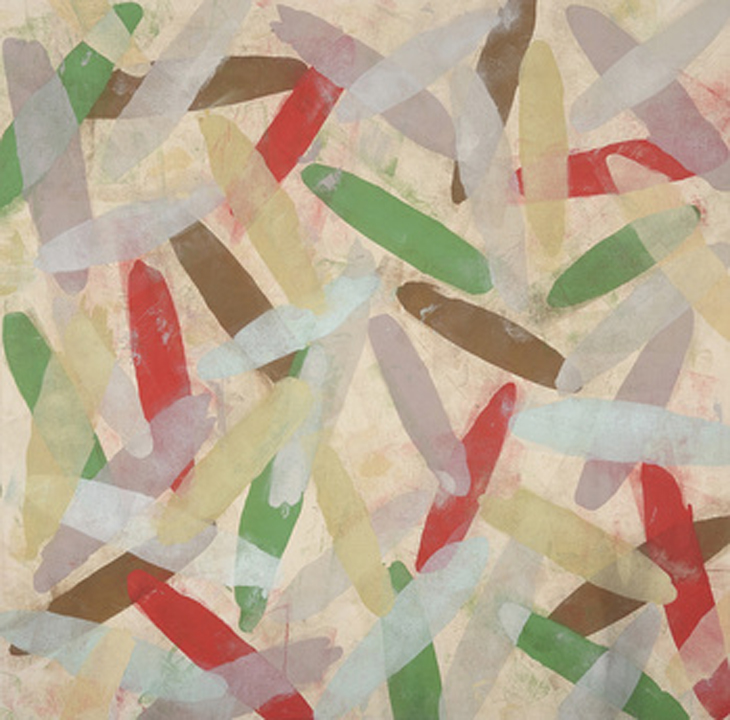 The moment reminded me of David describing his vision of art as a young man… living in outback Australia.

He related to acclaimed American art critic, teacher and writer Dore Ashton, author of a marvelous book David Rankin: The New York Years, how while ‘thinking and dreaming of paintings’ he was experiencing the landscape’. In particular it was the sky and indeed, the entire cosmos, which he said made him feel ‘insignificant and totally overwhelmed by the beauty of it, and very humbled at being part of it’. 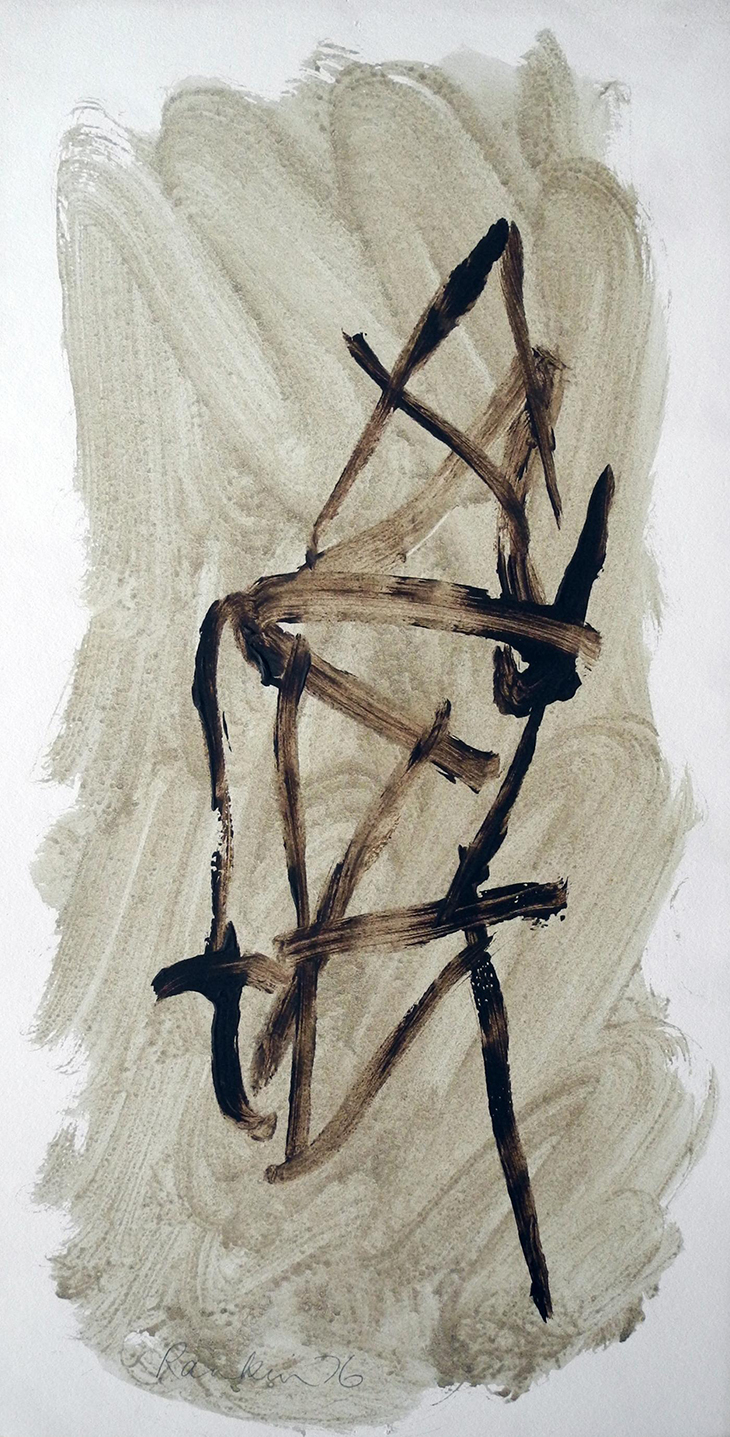 For me these are the observations I cherish most, for it is the star gazing journey we take and the experiences we gain in life that count in everything we say and do.

Whom we meet along the way influences how we interpret and decide what our own attitudes and philosophies will be, as well as how the passions and fashions we stand for when encountering both life and art, are shaped.

Art is the visible expression of something profound and invisible; in whatever medium is used, and whatever form it takes, it is shaped by the artist, the culture and age that produced it. 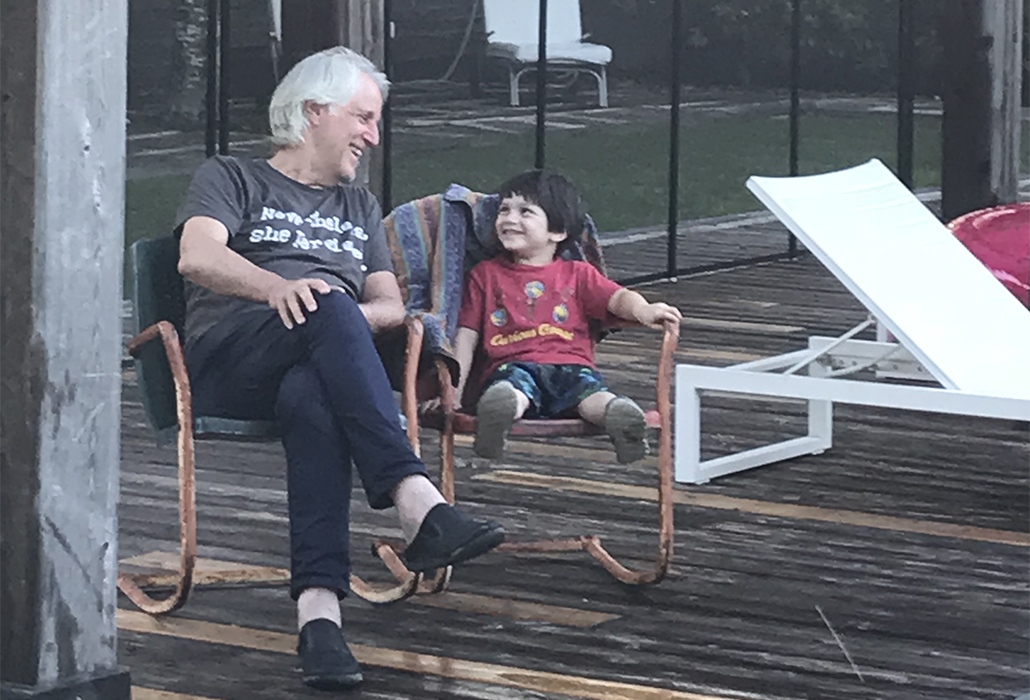 At each phase of David Rankin’s remarkable journey in life in the world of contemporary art, both here in Australia and in New York where he has lived with his extended family and friends (since 1989), he has invited us to open a door on a brand new world.

During different periods the talent integral to his being has risen swiftly to the surface showcasing his optimism, curiosity and unfailing energy, vibrantly.

His world of art is a multi-cultured realm, one in which he emphasizes line and considers colour carefully, while he lays down a geometry of forms, while thinking soulfully about their relationship one to another. 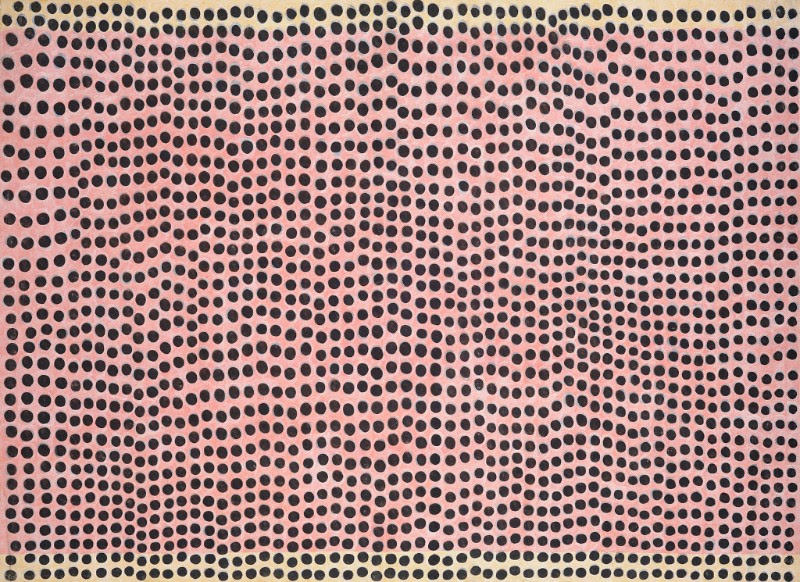 It is David Rankin’s rare ability to define what it means at the essence of both our soul and our culture, and what we can find when we step outside our own comfort zone, which shines through.

Some of his works shower his followers instantly with beauty and abundance.

Yet others cause us to stop, pause and reflect on the depth of feeling and emotion he is himself experiencing as he constantly provokes us to think beyond what the eye can, and does see.

His Red Leaving Later, rendered in acrylic and charcoal on canvas, captivates.

All his works include alternate views of both turmoil and great radiance.

They shine forth with a luminous light that will not be quenched, despite his now seven decades on earth.

While still evolving, his artistry continues to assert itself boldly and bounteously, and in all new ways.

Seems to me in observing his painterly journey from when I first encountered his works back in the eucalyptus tree bound beauty of Beecroft, a delightful northern district suburb of Sydney, so much has happened and viewing his works at times can seem overwhelming with change.

And yet, as I take that last slow Coastal walk with his work from 1987 onward, I find myself filled with a mixture of emotions, drawn to the intensity and depth of beauty he still continues to express in his works today.

There remains an intangible link between them all, one which continues to connect his arts and culture conversations; they are all about the mood and rhythm of nature affecting the heart. 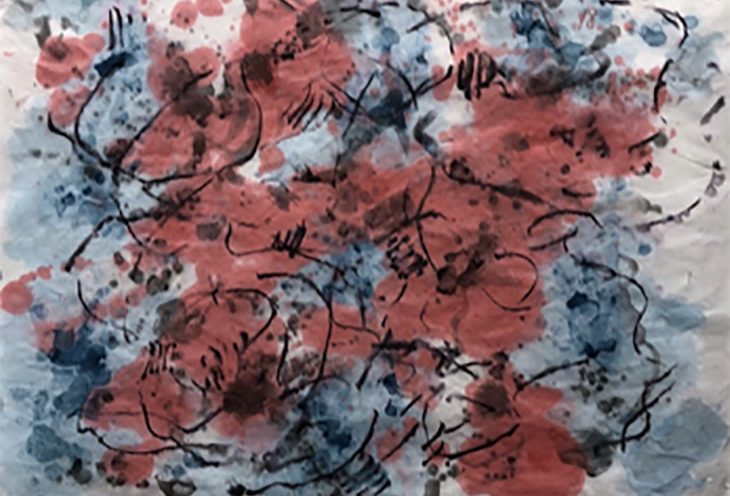 While I have been unable to review the Sydney show in person, the catalogue prepared reveals many past and present preferences, including Tarcoon Landscape 1968, his Mungo Lunette – Late Day, 2017 and a new favourite, Leaving Early II, 2018. 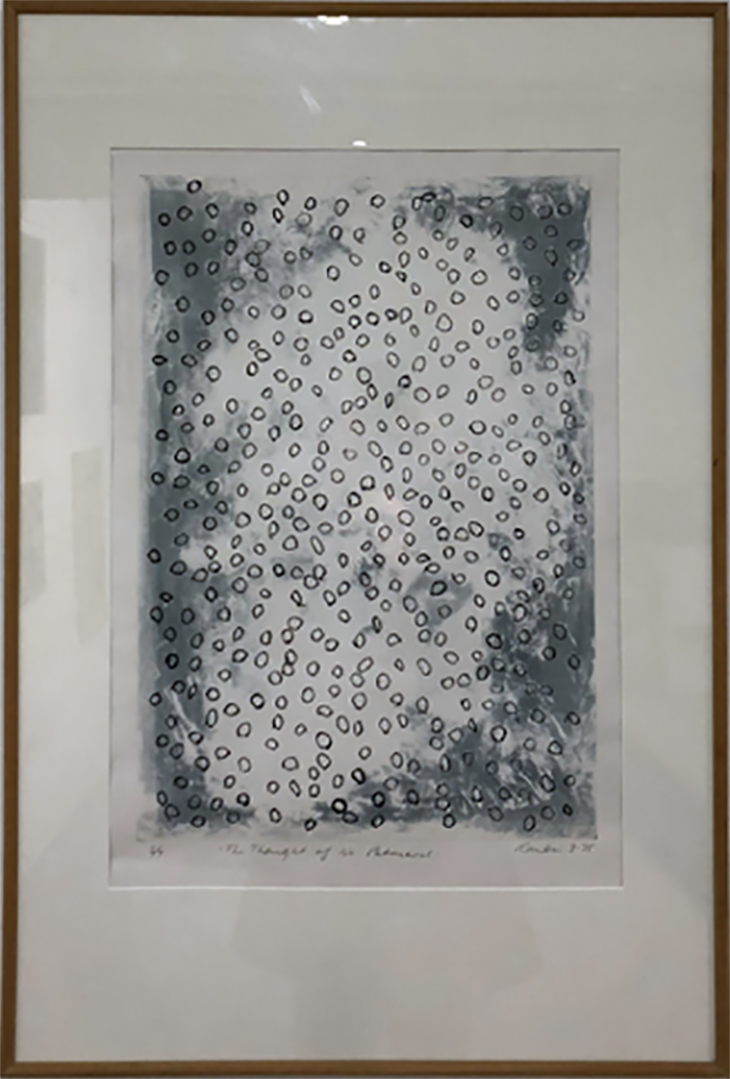 Then there is The Thoughts of No Patriarch 1984, produced at that point in his career when he was shooting past the stars, eager to reach the place where all dreams are really born. 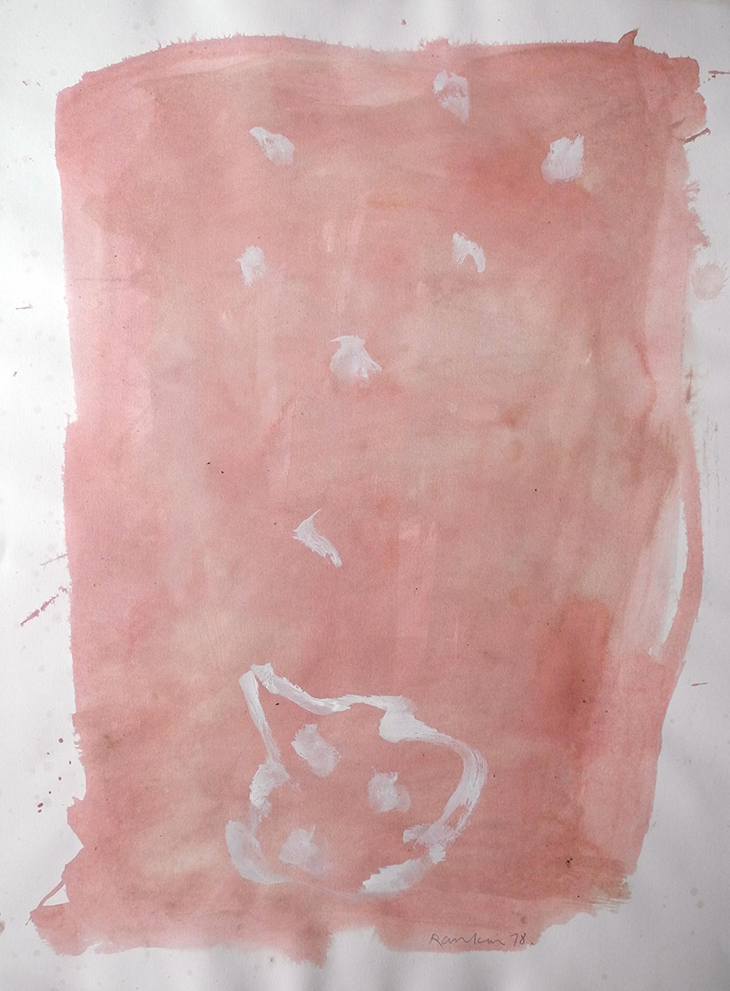 David Rankin’s art works over his lifetime have certainly reached a pinnacle of excellence, one that respects and expresses his involvement, concern and commitment to his craft.

This all takes place today in a world in which many people only want art to entertain and shimmer on the surface. Our generation, on the other hand had our attitudes forever changed by the Great Depression and World War II.

We learned patience; to pause, to ponder and to enjoy provoking our thoughts as we sought to inspire our own journey way beyond societal boundaries, while rendering it complete through meaning.

David Rankin faced a supreme challenge when at one point in his journey a roaring fire did in reality consume his home and many of his works, ensuring he would need to change direction and rise once again, like a glorious phoenix from the ashes of harsh experience.

Honed by both good and hard times, as well as larger than life encounters has ensured his art, from a simple bowl of rice to a complex pattern of light and shade, continues to retain its power to reveal and attract.

Indeed, it goes much further; reflecting the deep, intellectual, spiritual and philosophical characteristics of a man who is today a widely-read gentleman of his own invention.