Spring is a transforming time in every aspect of our world. This year in early September, Shelter Island, New York based Irish born award-winning Australasian artist David Rankin (b1946) will return down under to both Melbourne and Sydney to engage in, and expand a conversation about the rich vocabulary of forms, colour, motifs, light and the rhythmic patterns that have been integral to his life’s work in art. An opportunity to meet with David Rankin and talk to him first hand will be provided in Melbourne by the Charles Nodrum Gallery, Richmond, Melbourne, Australia.  You will be able to enjoy meeting the artist Saturday 8 of September… where you can discuss ideas;  including the ever expanding and constantly changing boundaries of contemporary art.

Conversations with the artist will take place against a backdrop of a small selection of his defining works past to present on show until September 13, 2018.

In Sydney David Rankin will have a showing of landscape works, also past to present, at the Conny Dietzschold Gallery, East Sydney, September 5 – 22, 2018.

Represented in many of the world’s leading collections and museums, David Rankin arrived in Australia as a child of emigrating parents. When he discovered painting was his life’s calling, through abstraction, he began to express in visual terms, that which cannot be expressed easily in words.

Challenging himself all the time, David Rankin spent the 60s – 80s soaking up cultural influences, including those of Asia; specifically, China and Japan, which came to the fore at that time in both design and art through publication.

He moved to New York in 1989, where he has since succeeded on an international stage very successfully. He has also continued his painter’s quest, to understand his own reaction to his encounters with other cultures, especially Chinese paintings and the writings of Chinese philosophers, poets and sages. This included exploring his own inner spiritual terrain, which has been influenced perhaps the most by the tenets of Buddhism.

A religious movement established in China during the Tang dynasty 618 – 907, the golden statue of Buddha had a huge impact on both philosophical and intellectual life over many centuries throughout the Far East.

The western fascination for the east and its abiding images have endured ever since they first discovered each other and its ever changing shapes and forms have continued to both fascinate and intrigue those who want to continue to expand their boundaries of understanding. David Rankin is among them.

Today, instead of viewing China as an enchanted fairyland as many of our ancestors however, we find that after all, just like other countries and cultures in our own time it has become more complex than ever before.

His Study for Wu Jia Po was painted in 1973, during the period I first came to discover David Rankin’s works – a long time before his vibrant New York Years. 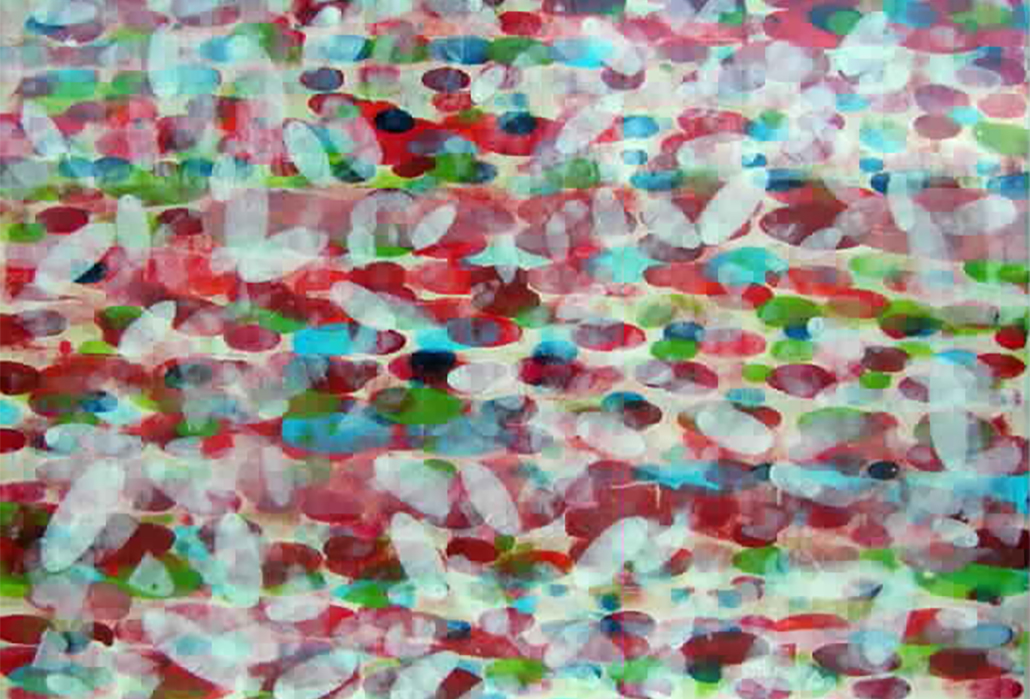 Alive with colour and confusion, it is painted in acrylic on canvas. David recorded his thoughts about rendering this work in a catalogue.

‘This is a study for a large acrylic on canvas titled Wu Jia Po, which literally translates from the Chinese as Lady Precious Stream. The series of works were meditations on the Buddhist notion of our existence as being a tiny ray in an eternity of reflected light’. 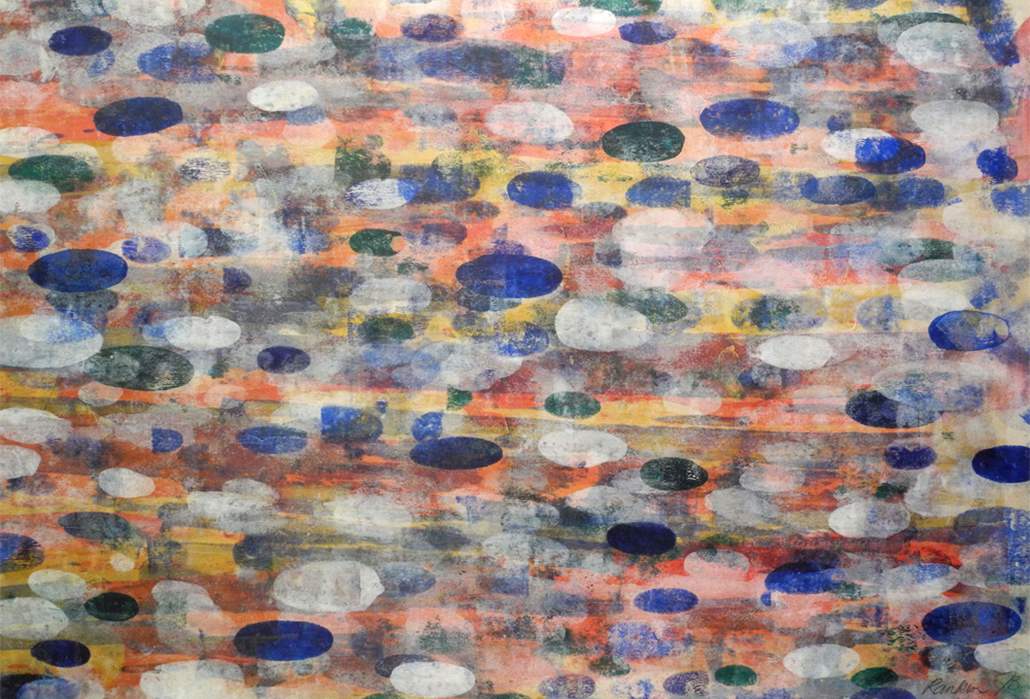 The dynamic nature of Taoist and Zen Buddhist philosophies, laid far more stress upon the process through which perfection was sought, rather than upon perfection itself.

In its time, Zen became a prevailing mode in art, purposefully avoiding bi- lateral symmetry, expressing not only completion but repetition. Formality and uniformity of design was considered fatal to the freshness of the imagination. 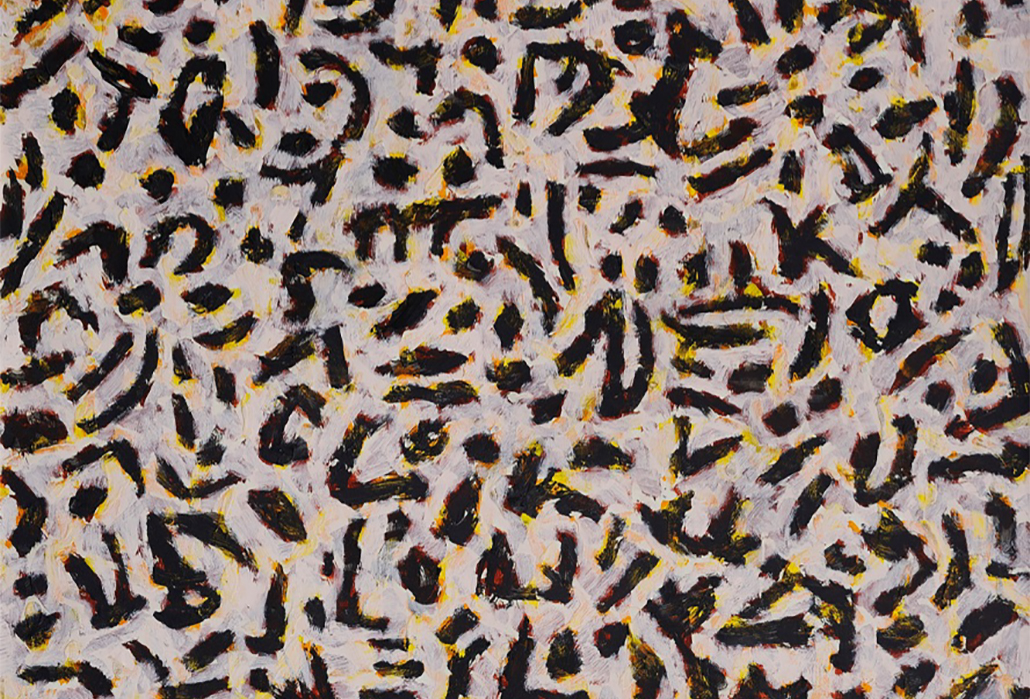 Many of David Rankin’s works from this period reflect a profoundly held belief in his own experienced sense of spirituality, one in which true beauty can only be discovered by one who mentally completes the incomplete.

He understood very early on the virility of life and art lay in its possibilities for growth. For him eastern ideas became a vibrant pathway to follow by focusing on rhythm and nature, imagination and both aesthetic and logical unity all of which had been visualized through ideas gleaned from antiquity.

While the Japanese themselves do not like to admit it, every aspect of their art is Chinese in origin. Its shapes and forms are sure to provide solace to the soul of many generations to come. 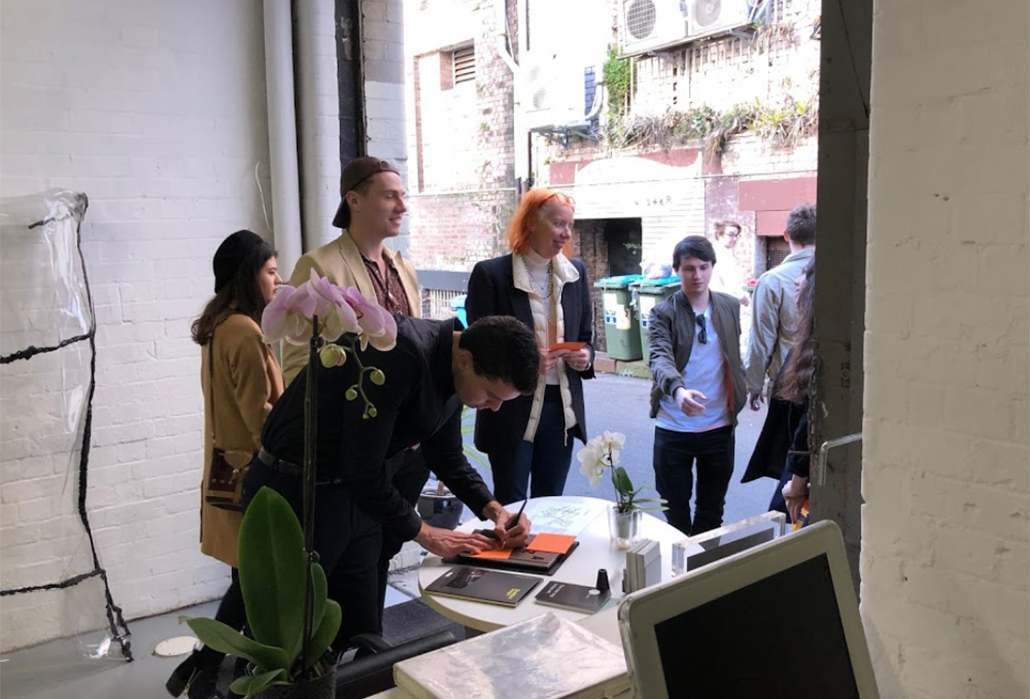 Conny Dietzschold (centre) at her gallery in East Sydney,

In Sydney works on display there will hint at his ongoing fascination with dramatic topography of the environment; great mountains, misty river valleys, trees. lakes and waterfalls, which especially inspired poets, landscape painters and garden makers down through the ages. 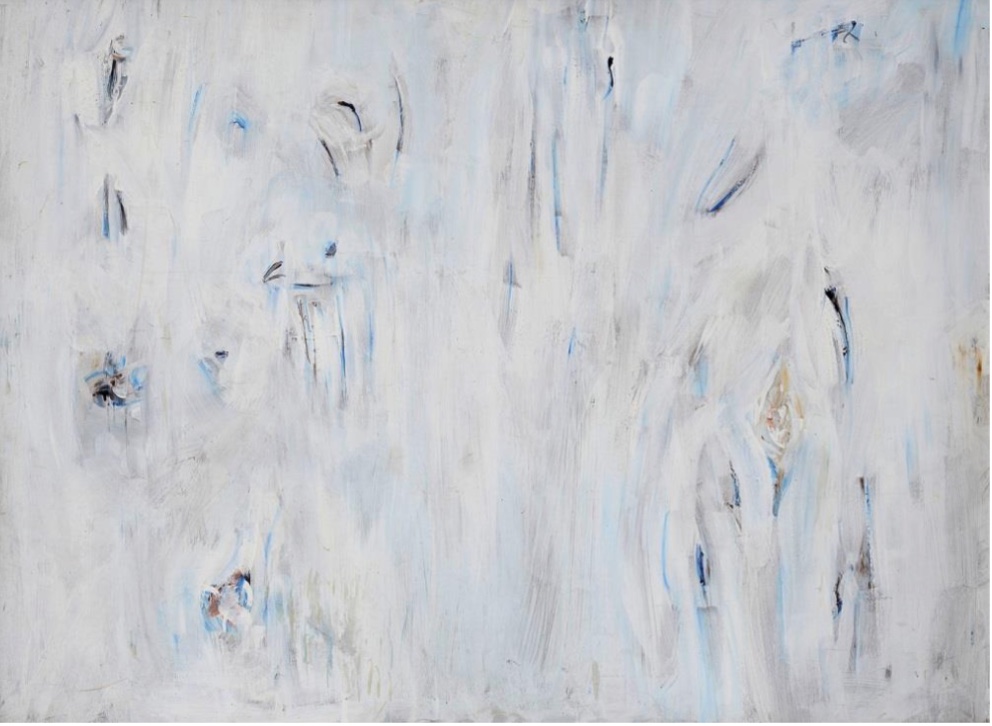 For the Chinese works of art became an outward expression of a man’s inner strength. This concept is highly contradictory, for to be at one with the ebb and flow of the natural order of things, you must also embrace the idea everything is in a state of constant flux and contradiction.

So, to go forward, you must step back; to gain ground you have to let go; to win, at first you must lose. This introspective philosophy has a ‘belief in, and reliance on, human intuition. 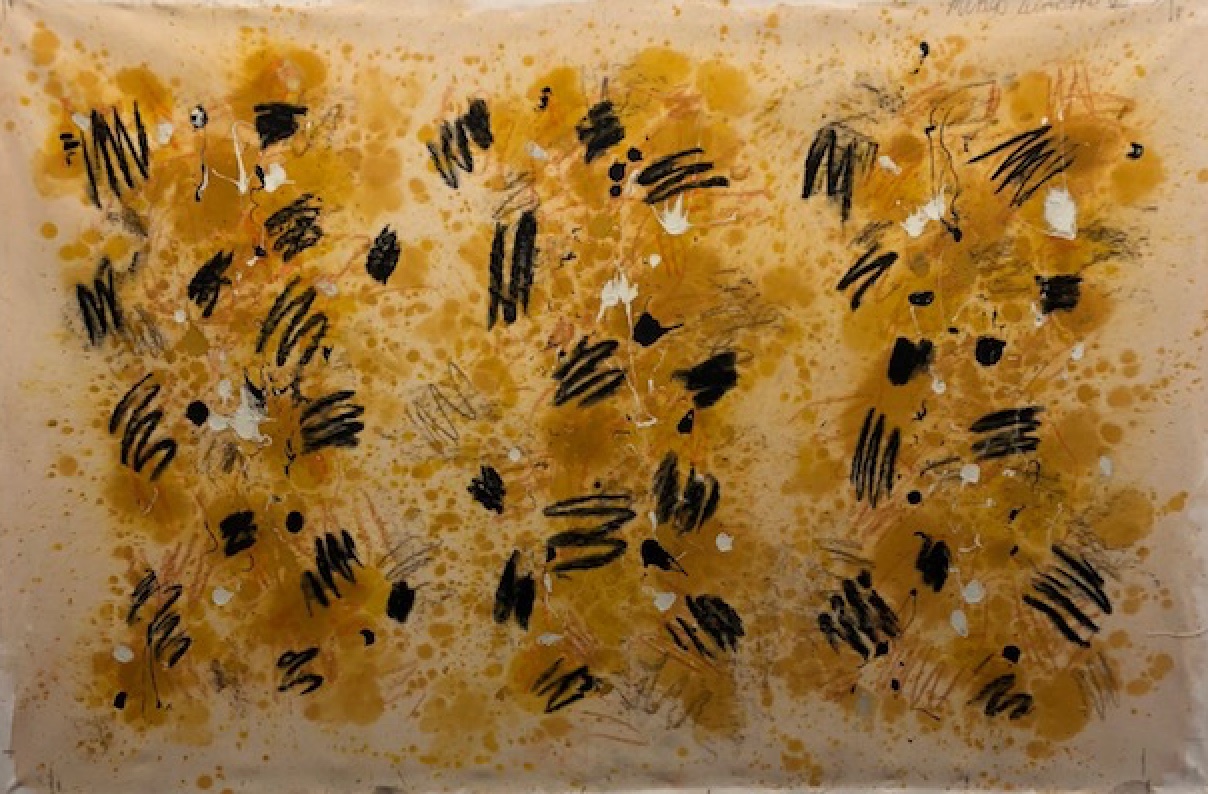 An expression of Ying and Yang, the two opposing forces at the heart of Chinese philosophy, where the rough and masculine yang is balanced by the soft and feminine, ying.  David Rankin understands and expresses these concepts well in all his works.

David Rankin: Conversation
Past to Present 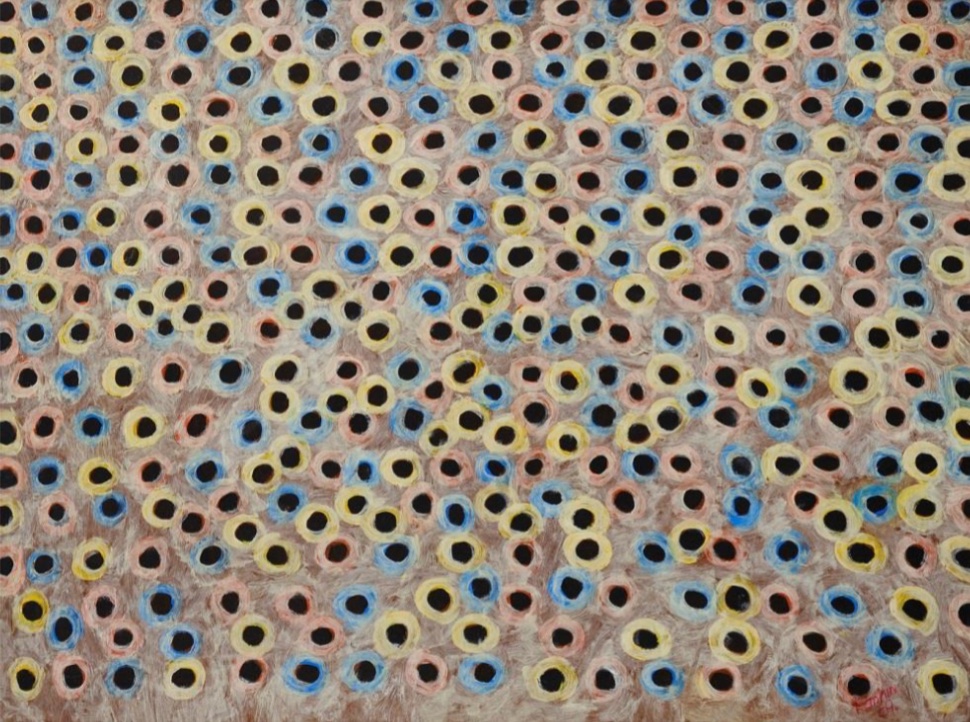 David Rankin: Landscapes
Past and Present

Baz Lurhmann, Chanel and Country Road were all big winners in the 1st Australian Fashion Film Awards 2015, helping to inspire the industry into the future