The Charles Nodrum Gallery and the Mossgreen Gallery at Melbourne have advised they will concurrently present two exhibitions of the works, past and present by acclaimed New York based abstract artist David Rankin (b. 1946) from August 17, 2017. David Rankin in his Shelter Island studio with two of his recent works. Photo Annette Hinkle

David Rankin has participated in well over one hundred exhibitions in cities and countries around the world including at New York, London, Paris, Beijing, Mexico, Vienna, Berlin and Cologne, as well as all over Australia.

Spending his most formative years in Sydney, during the 1970’s, David Rankin founded the Port Jackson Press to produce fine art prints at a time when he had numerous solo and group exhibitions on display internationally.

It was a time when many young Australians were in their 20’s and heading overseas to Europe to help expand their horizons and to learn about their cultural inheritance.

For artists going overseas to work at the time it was not only about growing their expertise, but also about challenging themselves to succeed on an international platform. Awarded the Wynne Prize in 1983 (Australia’s most prestigious landscape award) David Rankin’s aim was all about exploring his own inner spiritual terrain. This was a concept seemingly little understood at that time, however it was well evident in his work exhibited in Sydney from 1968. I remember his work well throughout the 70’s because I used to haunt art galleries in those days, seeking to understand how new artists were helping  to lead the way forward, reinventing the world through creativity, after the horrors of World War II.

His wife Lily Brett’s parents had survived the holocaust and he was helping in his own way to turn the darkness into light. His Jerusalem series followed a trip to the holy land in 1988.

David decamped to New York from Australia with Lily in 1989, where he had first arrived as a two year old with his emigrating English parents.

Praised for the power, insight and quality of his work, he was selected as Australia’s official representative in the UNESCO Fortieth Anniversary Exhibition, celebrations that toured the capital cities of the world.

Through abstraction David Rankin was endeavouring to express in visual terms that which cannot be expressed easily in words and he did it very well. He used colour and form as a metaphor for his own emotions at a time many may have thought it uncool, by combining elements from both Aboriginal and Asian art practices.

It was 2013 when Dore Ashton the American art critic, teacher and writer released a book on Rankin’s work, David Rankin: The New York Years. She commented… David Rankin ‘… felt… any Australian Art had to have a sense of place and that is nowhere better expressed than in Aboriginal painting’. Recently I posed questions to Charles Nodrum of the Charles Nodrum Gallery who will be showcasing the historical works of David Rankin from the 60’s and 70’s, perhaps the works I know best.

Not really.  I’m a collector as much as a dealer which, at times, can create conflicts between my collecting and my business. But what I handle reflects my personal taste: I try and sell what I’d like to own myself, and this always makes the sales process genuine – but, as noted, occasionally conflictual. In the 1980s, when we did a show. I pioneered a format which is now being revived – to exhibit the early work of an artist in conjunction with their current gallery: I exhibited the 60s and 70s paintings of Peart, Aspden, Rankin and Sansom and am considering extending this practice once more, since the format worked well.

I am particularly keen on the work from the 60s (the dot-based landscapes) and the 70s (with their overlapping swathes of colour) and both strands represents significant branches of the abstraction was practised at the time. On this score the work coheres well with that of other artists I admire, exhibit and collect.

Whilst I have handled numerous works of David’s on the secondary market, exhibitions are another matter.  Initially he wondered what we might do, and I suggested we repeat the exercise outlined above – an extensive survey of several decades in two galleries simultaneously.

It is an unusual arrangement but Mossgreen were flexible, and prepared to act jointly, since both David and I were able to assure them it had proved interesting and mutually beneficial.  We are currently close to finalising our selection, which, with David based in New York we do via the internet, sending images back and forth and talking on the phone. 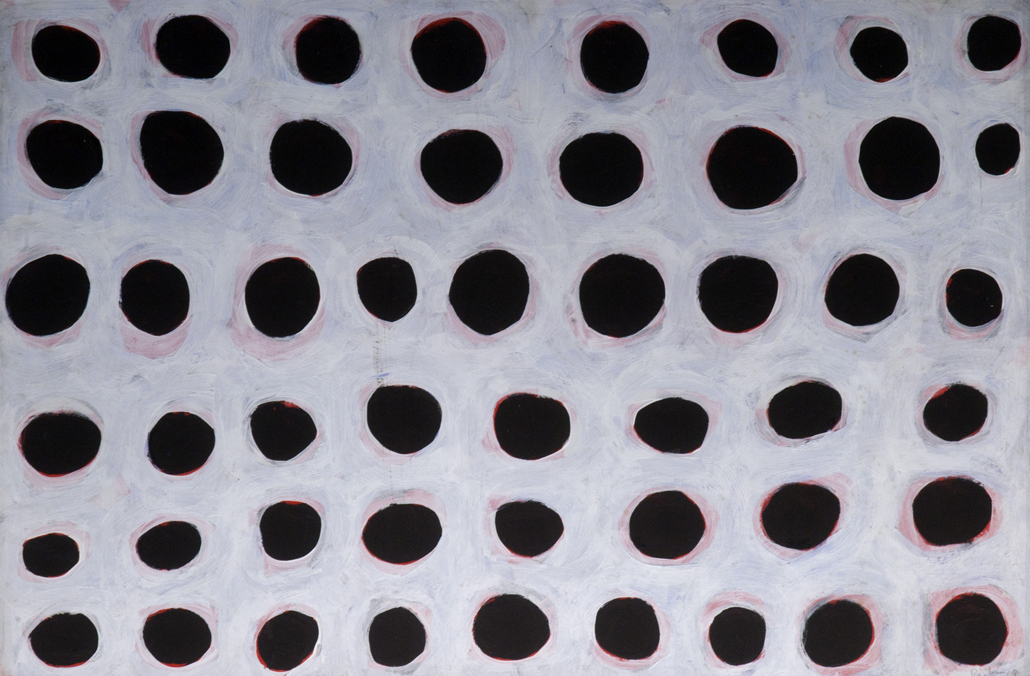 Louth I, 1969, oil on board, 51 x 76cm Image Courtesy The Artist and Charles Nodrum Gallery, Photography by Jason Penny

I would not show it if I thought it was ephemeral and I have long held his work in my personal collection.  However, artists that move away from Australia can find it takes time to re-establish themselves, so it would be unrealistic to assume it will be plain sailing. This said, David’s personal and visual connections with Australians and their landscape is strong, and his energy is positive and infectious.

The Charles Nodrum Gallery and Mossgreen Gallery will be showcasing the very best works of a man who has forged his own special place in the world of meaningful thought provoking art in our contemporary world. Over the course of the time leading up to the exhibition we will be welcoming further articles on the coming David Rankin shows.

Contributors will include Long Island based Allison Weibye, currently working with artist David Rankin in New York where she is helping confirm all the choices of works being made to be on show here. She will share her personal experiences and the News from Shelter Island where David has his studio, providing a unique perspective on the works to be shown overall.

Lisa Ferhily, Director of the Mossgreen Gallery, gallery owner Charles Nodrum will also offer their insights into the power, insight and quality of David Rankin’s works.

My portrait of a young man on the brink of life is not posh or a wealthy image. It records that time when the elegant art of drawing was part of polite society.