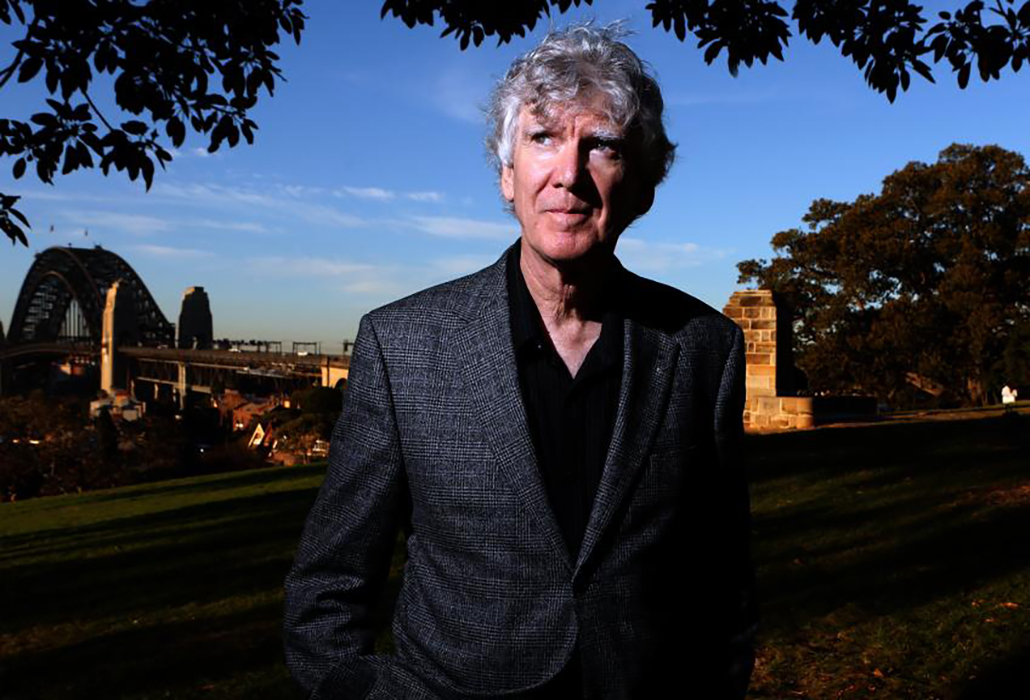 David Williamson is Australia’s best known and most widely performed and admired, playwright. His latest play, Sorting Out Rachel recently had its world premiere at the Ensemble Theatre located at Kirribilli, a Harbour side suburb of Sydney.

Following the Sydney Season it will travel to the J Theatre at Noosa Heads on the Sunshine Coast in Queensland, north of Brisbane.

It is remarkable Williamson has had more than fifty three plays produced since he started his brilliant career, including The Removalists, Don’s Party, Travelling North and Emerald City.  He has written many screen adaptions of his own plays coupled with original screenplays for feature films, including the widely acclaimed Gallipoli, Phar Lap and The Year Of Living Dangerously. 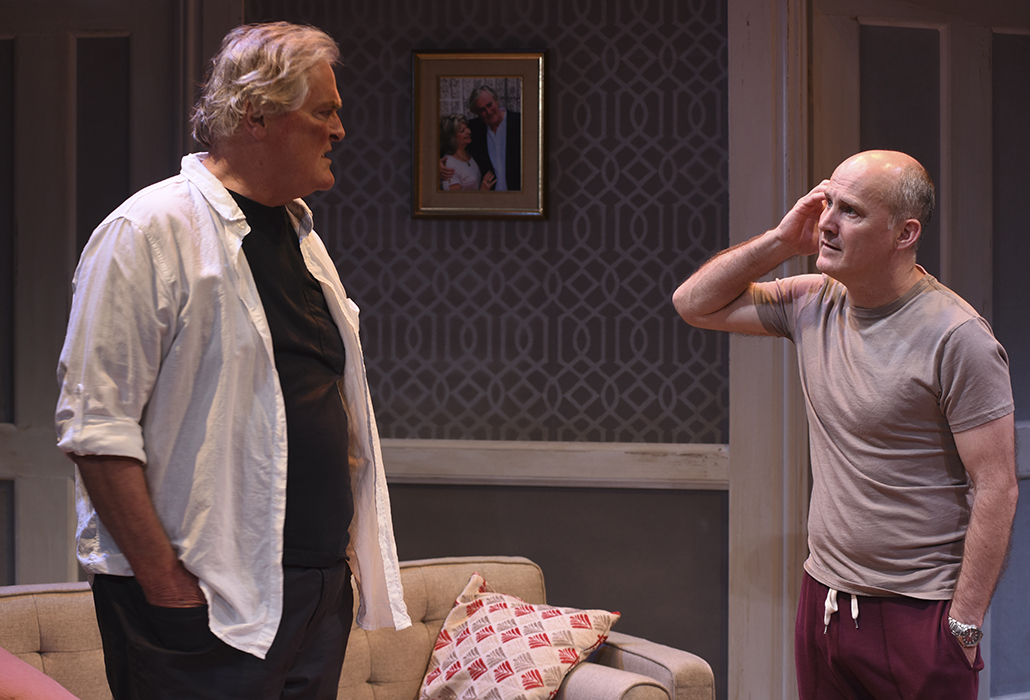 John Howard and Glenn Hazeldine in SORTING OUT RACHEL, photo by Heidrun Lohr

He has been the recipient of countless awards including twelve Australian Writers’ Guild Awards, five Australian Film Institutes’ Awards for Best Screenplay and in 1996 he was awarded the United Nations Association of Australia Media Peace Award.  David Williamson is one of Australia’s Living National Treasures.

In the introduction to his play After the Ball Williamson writes. 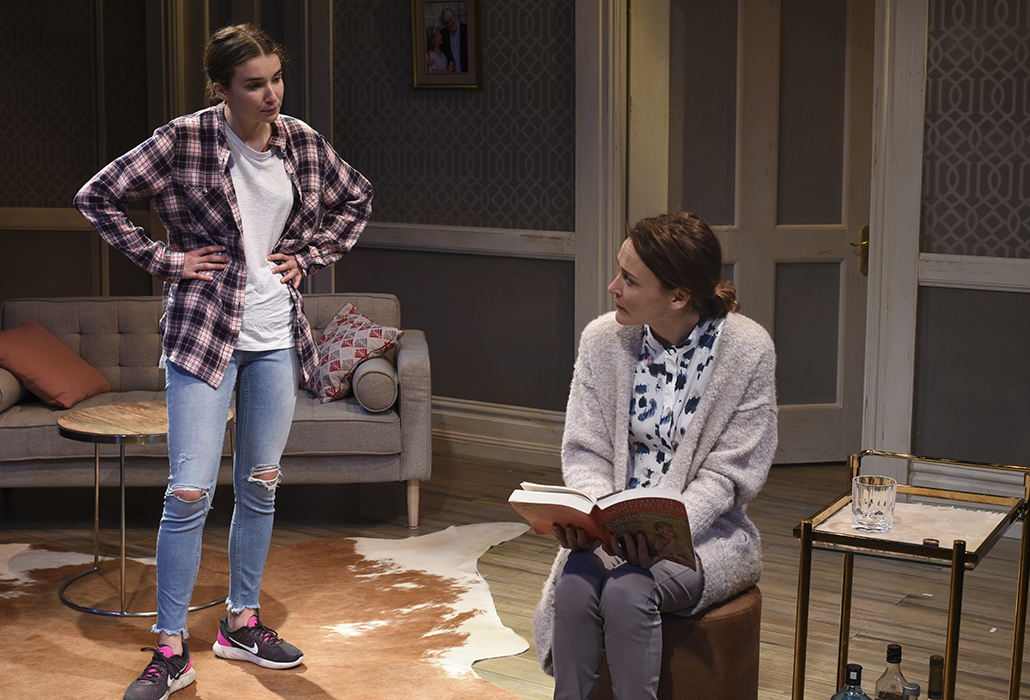 Jenna Owen as Rachel and Natalie Saleeba as Julie in SORTING OUT RACHEL, photo by Heidrun Lohr

I felt these comments expressed in 1997 were very relevant in his current play Sorting Out Rachel. Williamson explores relationships where the idolizing of money, the turbulent tempestuous outcomes of control and power are juxtaposed with the integrity of high moral codes.

However there is certainly a final reckoning with ‘deceit and duplicity’ that is refreshingly compassionate and optimistic. This thread for change and redemption is paramount to improving the human spirit and negotiating forgiveness and altruistic advancement.

The warmth and wisdom of this real and contemporary play was constantly acknowledged by the audience throughout the performance. Clapping responses to the shifting attitudes, behaviour and dialogue within the play occurred frequently and simultaneously. 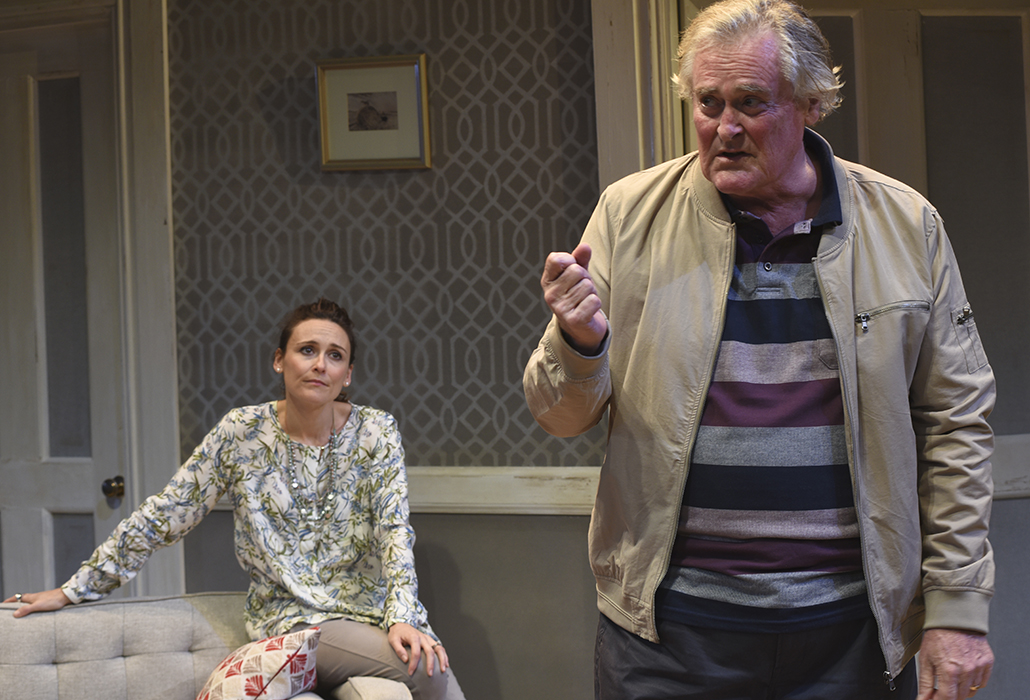 Natalie Saleeba as Julie and John Howard as Bruce in SORTING OUT RACHEL, photo by Heidrun Lohr

The audience was totally aligned to the concepts and character development within the construction and execution of the play under the discerning direction of Nadia Tass.

The central character Bruce (John Howard) suffered the indignities of presenting with attention deficit disorder as a child.However instead of surrendering to the predictions of a very cruel and insensitive teacher he developed a potent ambition to be successful.

He realized at a very young age that prosperity was measured in terms of financial prowess. Bruce was ruthless in his pursuit of money and became a very wealthy man.

He was married to Molly a devoted wife, who recently passed away, but was having an affair with the Aboriginal housekeeper who tended the needs and wants of his family including caring for Bruce and Molly’s daughter Julie (Natalie Saleeba). 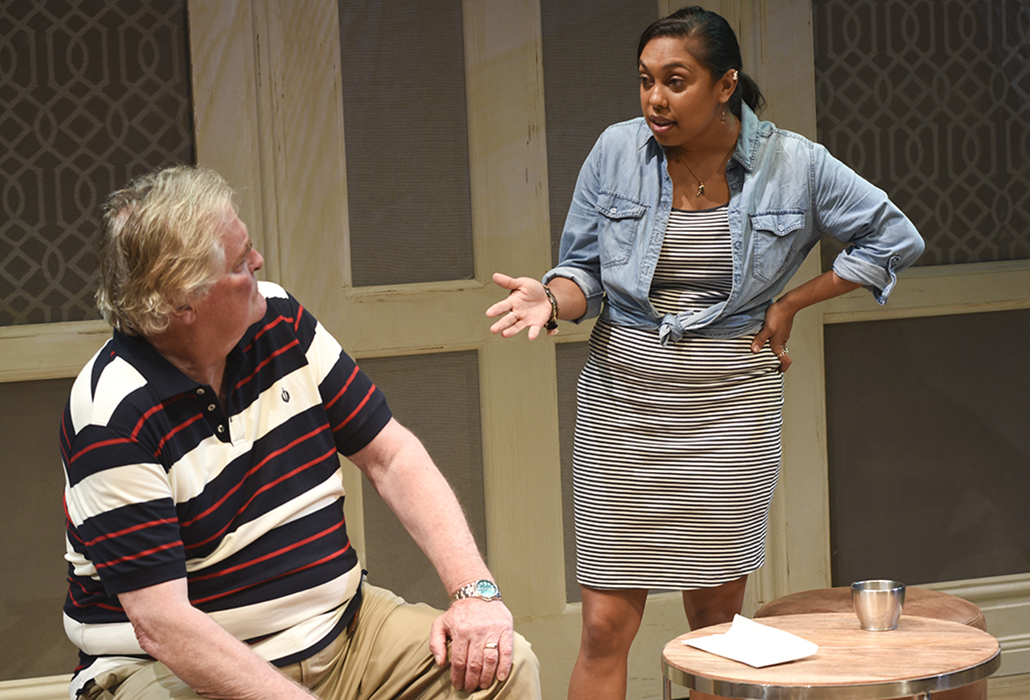 John Howard and Chenoa Deemal in Sorting Out Rachel, photo by Heidrun

In the opening scene we discover his illegitimate daughter Tess (Chenoa Deemal) is about to outwit her father and bind him to a philanthropic cause, a legacy that will soften the consequences of his hardnosed business achievements. In return she promises to keep the enduring family secret.

Chenoa Deemal truthfully and intelligently communicates life’s dilemmas and people’s foibles. She confidently develops her own character’s attributes even though her on stage presence is extremely limited. Deemal unmasks the narrative and ignites the story with humour, affection and acumen. The effective performance of her role is pivotal to the success of the play.

Bruce declares to his Aboriginal daughter that “I love you as much as Julie.”  Deep within the callous money maker is buried a compassionate man with the capacity to make amends.  John Howard’s performance blends this complexity with professional nuance and worldly insight. 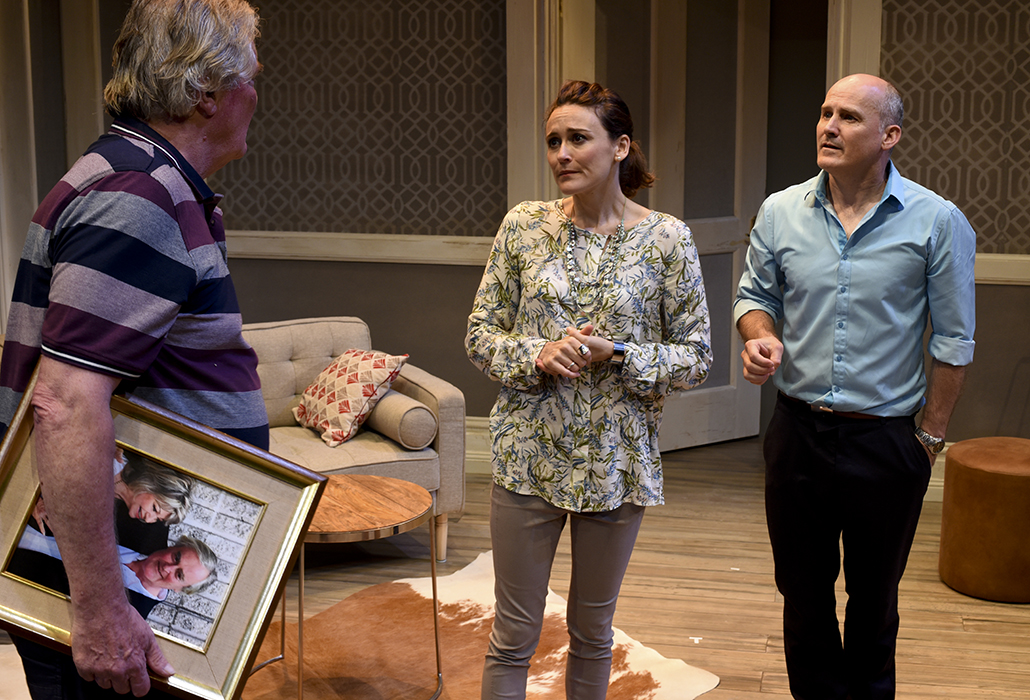 Bruce makes the decision to visit for an extended stay with his daughter Julie (Natalie Saleeba) and husband Craig (Glenn Hazeldine). He wants to get to know his granddaughter Rachel and perhaps surround himself with the love and comfort of family.

Howard ably expresses the pathos of grief experienced by the loss of his wife Molly .His convincing performance is also very astute and real in his portrayal of analysis and observations of a family in crisis. 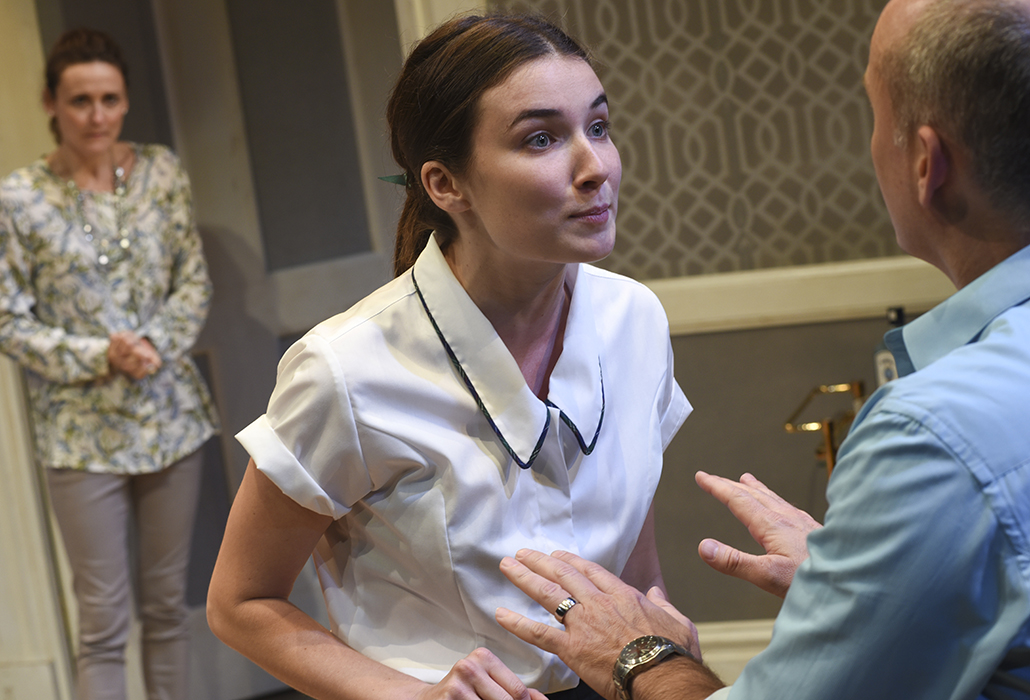 Rachel the daughter “has become a pain” and three way arguments continue to evolve between parents and their belligerent teenage daughter.  Bruce is acerbic in his summation of his granddaughter and his “callous view” certainly triggers a positive change in parenting style by Julie.

Natalie Saleeba subtly creates a transformation in her character Julie. Julie responds to life’s dilemmas with a measured restraint that emanates from an innate sense of goodness and is perceptively revealed by Saleeba. 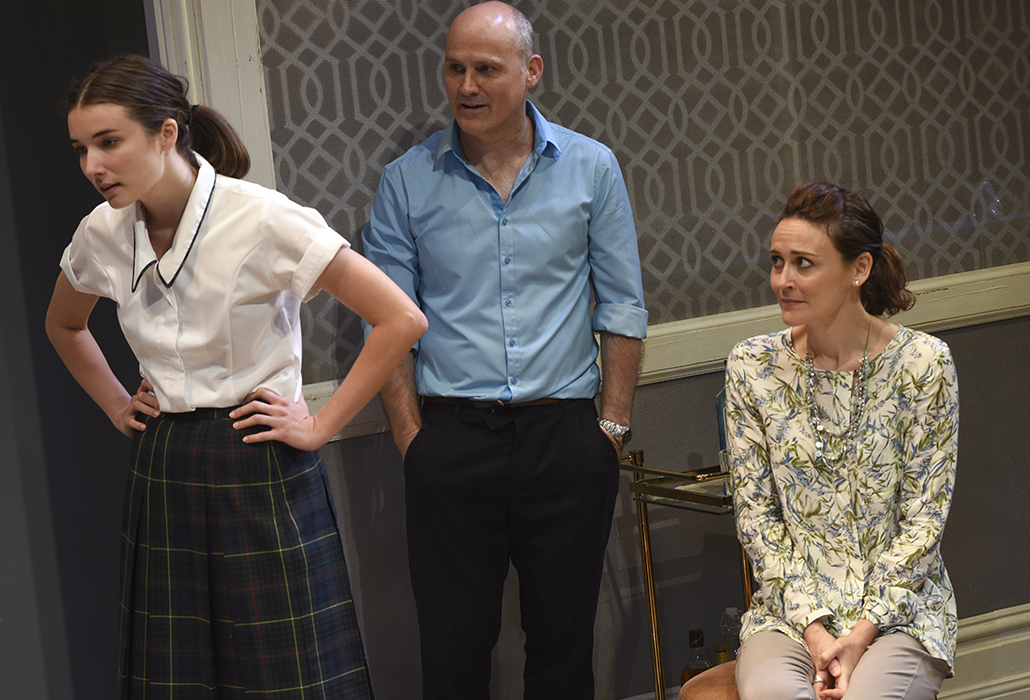 Jenna Owen makes her stage debut as Rachel and delivers a faultless performance. She uses her voice, body and gestures to convey her character’s adolescent idiosyncrasies.

The play is peppered with humour that resonates with the audience. However against this background is set the more serious issues of entitlement, inheritance and our national responsibilities to our indigenous community. These crucial matters are explored with humanity and sanguinity. 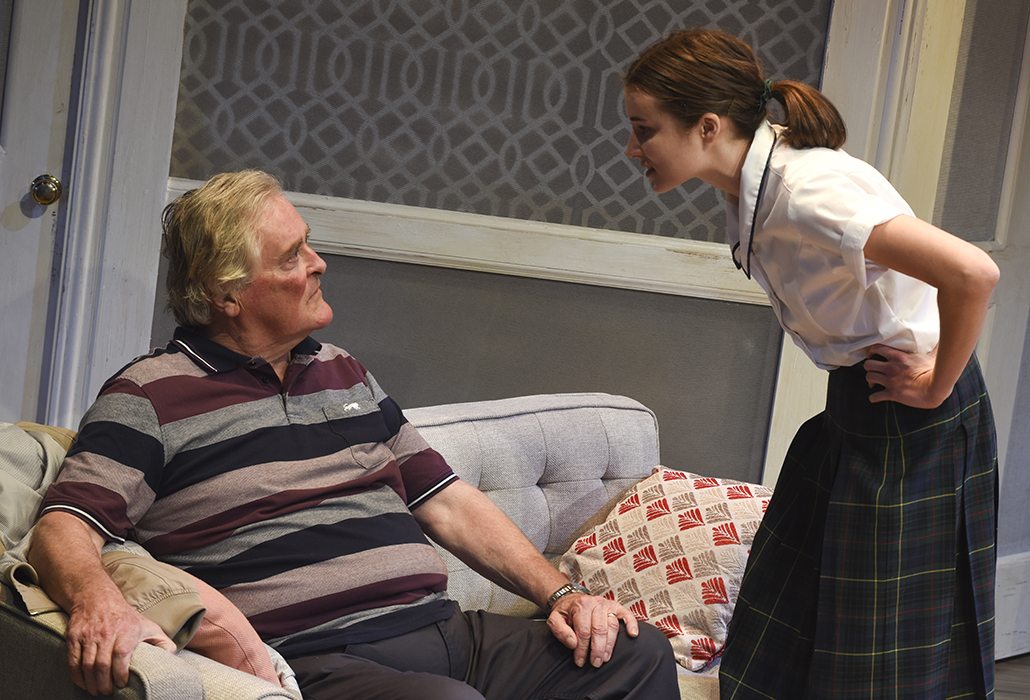 John Howard as Bruce and Jenna Owen as granddaughter Rachel in SORTING OUT RACHEL, photo by Heidrun Lohr

Set and Costume Designer Tobhiyah Stone Feller has crafted a modern chic home tinted with tones of grey and white and softened with the warmth of wooden floors. The translucent screen cleverly allows for effective scene changes and additional rooms. The visual configuration of the set design is very flexible and harmoniously aligned to the play.

David Williamson has once again responded to the challenges and situations of our current world. He has invited audiences to share in his concerns and to reflect cautiously and carefully on everyday dilemmas and decisions. 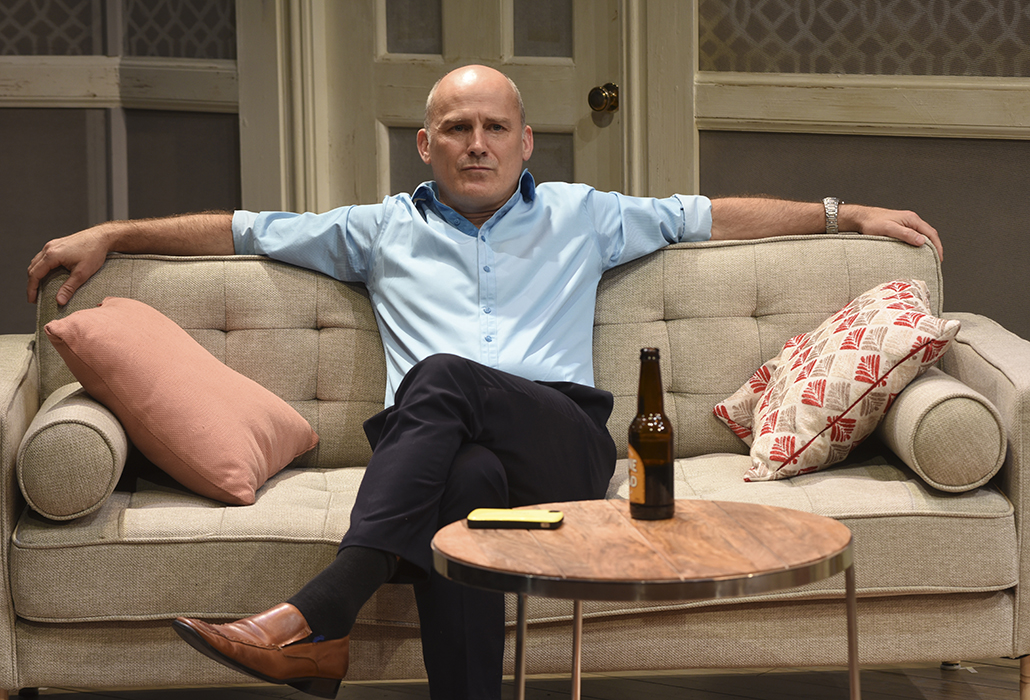 Glenn Hazeldine as Craig in SORTING OUT RACHEL, photo by Heidrun Lohr