Growing up in 50’s Australia, my parents and most especially my favourite Uncle, often lifted me up to kiss one of my aunts and uncles goodbye after they had passed.

Even as a small child, in this way I soon understood that death was an integral aspect of life, one that must be respected and honoured by those who loved and cared for the deceased.

How to mourn was also an important aspect of the rituals surrounding death, that were still respected and the etiquette and protocols attached to it, maintained.

Memories of ‘Victorian ideas’ about people in mourning, of wearing only black and refraining from having a good time for a year or more were still foremost in everyone’s mind, at least in my family.

Death and mourning were particularly poignant in Australia as a British colony, where life came to be respected even in death, far more perhaps than it had in the United Kingdom during, the late eighteenth century prior to the French Revolution.

So many people’s parents and grandparents had been transported from that unhappy place where they were starving. They were also treasured by those who had fled from Ireland in particular during the potato famine, including some of mine. So mourning attire also became about the development of culture and society.

At The Metropolitan Museum of Art in New York the exhibition Death Becomes Her: A Century of Mourning Attire is the Costume Institute’s first fall exhibition in seven years. This exploration of the fashionable, aesthetic and cultural implication of mourning fashion that existed most especially during the nineteenth century and early twentieth century will be on view through the Xmas season until February 1, 2015.

The timing of the year, holding it in the fall certainly seems appropriate to the subject. Autumn is a wonderful season for reflection.

The loss of Queen Victoria’s beloved husband Albert in 1861 after only 20 years of happy marriage for the young Queen was a bitter blow she really never recovered from, one she really only learned to live with over time. Her grief and wearing of black affected society at all levels internationally, particularly high society, which in those days moved fluidly between England and Europe and England and America.

Most of her children were married off into the courts of Europe and as she was a Matriarch for her family, the first woman Monarch in England for centuries, she was a considerable woman of influence, one who had a powerful impact on the whole of western society.

She plunged deeply into mourning, wearing only black from that time on. She also had Albert’s clothes laid out every day by his valet until she went to join him. She was as devoted to him in death as she had been in life.

This thematic exhibition of mourning clothing has been organized chronologically. It features mourning dresses from 1815 to 1915 all in the predominantly black palette of mourning, along with a great wealth of mourning jewellery and accessories.

From simple styles to those we would describe today as being perhaps a little ostentatious the majority of the garments have been sourced from The Metropolitan Museum of Art in New York‘s Costume Institute Collection.

They are set off within a mainly stark white space, which has been amplified with historic photographs and daguerreotypes. Fashion plates, jewellery and accessories are also an important aspect of the collection.

Altogether Some thirty (30) ensembles are on view, encompassing the 19th and early 20th centuries. They showcase the ‘sartorial splendour’ of women wearing ‘black’ in the western tradition of mourning, one also meant to restrain men from making advances, sexual or otherwise, during that reverent period.

Black “… dramatizes the evolution of period silhouettes and the increasing absorption of fashion ideals into this most codified of etiquettes,” said Harold Koda, Curator in Charge of The Costume Institute, who is curating the exhibition with Jessica Regan, Assistant Curator. Wearing black was a strict regime in a society bound down by so many rules throughout the second half of the nineteenth century in England, America and Europe, with particular fabrics gaining a tick for their appropriateness.

These included crepe and corded silk, with muted shades of grey and mauve also entering the equation later in the century and in the era a decade or two prior to World War 1.

“Elaborate standards of mourning set by royalty spread across class lines via fashion magazines,” said Ms. Regan, “…and the prescribed clothing was readily available for purchase through mourning ‘warehouses’ that proliferated in European and American cities by mid-century.” Mourning first became part of a formalized ritual way back in ancient times as evidenced in the ‘Epic of Gilgamesh.

This epic poem from Mesopotamia is considered the world’s first truly great work of literature.

Black is basically the absence of all colour, because technically it is not a ‘colour’ at all.

While white reveals, black conceals and in mourning terms it was also symbolic.

Charcoal which is born through fire, was used in ancient times on cave walls for drawing and so black is a ‘colour’ associated with the very earliest forms of art.

It’s all about ‘darkness’ and mystery and during ancient Greek and Egyptian times represented the underworld and evil.

In Roman times black was more a dark grey because dyes were not steadfast. It represented death and mourning and special clothing dyed black was worn with the time of passing becoming known as the hora nigra, or black hour.

During the Christian dominated Middle Ages ‘black’ became associated with humility and penitence, as well as death and sin. During the 14th century the quality of dyes changed and rich black robes were able to be produced, ensuring that ‘black’ also took on all new connotations of prestige, power, strength and authority when worn by Italian nobles. In Italy from 15th – 17th centuries the fashionable elite of the North such as the Duke of Mantua and Urbino, all began to wear black to symbolise their power, dignity and to represent temperance as well. Most of all it represented refinement.

In Venice it also became all about piety and virtue. This is when Black became firmly established as the right shade for nobles and subsequently all ‘gentlemen’ to wear.

This fact was confirmed by Baldassare Castiglione in his The Courtier, the essential guide of 1528 for those men seeking to become ‘ideal’ advisers to a Prince.

During the eighteenth century in England, The Courtier, The Prince (Machiavelli) and The Bible became the three books all ‘men of learning’ had readily to hand, carrying ideas about wearing the colour ‘black’ forward.

Reasonably unfashionable during most of the 18th century, black roared back into contention after the Revolution in France.  It eventually became associated with the ‘Romantic movement’ with the poets all wearing it well, particularly Percy Bysshe Shelley and Lord Byron who both became the synthesis for an enduring ideal of the romantic writer.

Lord Byron created the dashing fashion of casual elegance with open necked shirts and silk lounging garments. His rival in the good looks department the preeminent scientist Sir Humphrey Davy (1778 – 1829), the rock star scientist who was also a rage in society long before Brian Cox, remained distinguished by wearing black. In America, artist James McNeil Whistler also made black popular, while in France in the age of modernity,  impressionist artists such as Pierre Auguste Renoir believed black to be the ‘queen of colours’.

Throughout the nineteenth century the length of mourning changed, getting shorter as time went on.

Widows mourned their husbands, basically twice as men did their wives,  whereas in the provinces it was mainly the same length of time.

There was many variations, however the rules of a code became established and the ideal of a ritual for mourners in society. Following Queen Victoria’s death and during Edwardian times in England and right up until World War 1, the wearing of black once again took on fashionable concerns.

This was inspired perhaps by the King’s new youthful mistress the much admired actress who had been born on the Isle of Jersey Lily Langtry (1853-1929). Jersey Lily became celebrated in London for both her beauty and charms and for wearing her ‘little black dress’ everywhere.

Her rise to achieve ‘celebrity status’ came about directly because of how she looked in the black dress she was wearing to mourn her younger brother Reggie.

Attending a social event at Lady Sebright’s House in Lowndes Square wearing her black dress the artist John Millais was so captivated by her beauty he completed several sketches of her on the spot. They, and she became a sensation overnight when he sold them, with black becoming infused in fashion from that day forward.

My father had been born in 1901, the year Queen Victoria, who had become known as the ‘Widow of Windsor’ herself left this mortal coil, that idea that women wearing black for mourning foremost in his mind.

My grandmother always particularly insisted we wore black and that no one in the family should ever speak ‘ill of the dead’.

Our period of mourning was generally about three months.

During that time in any conversation about the deceased were were only ever to talk about the positive aspects of their personality, which were held up as fine example for us to follow in our own lives. It was during the 1950’s that black became a symbol of individuality and worn by those who didn’t accept or adhere to rules or a ‘status quo’. So it is today many women’s ‘colour’ of choice, which also has associations with style.

Today the ‘colour’ black and wearing black in itself is considered ‘beautiful’. 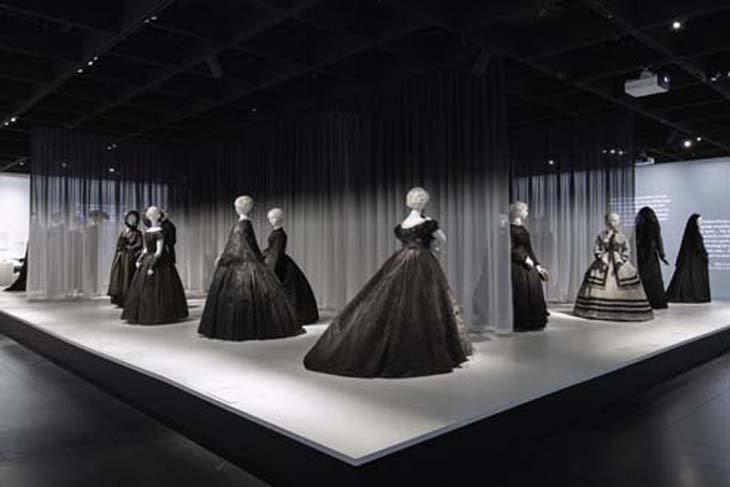 DEATH BECOMES HER
A Century of Mourning Attire

Vale Betty Churcher AO, driven by your passion for embracing the sublime you inspired and motivated so many of us who shared your enthusiasm for arts and culture