Debbie Harry, singer, sex symbol and style icon celebrated her 68th birthday on July 1st, so this week in Fashion Elixir I will celebrate one of my all time favourite women of rock.

On a family holiday to the Gold Coast, ensconced in a caravan, with a pack of cards and a transistor radio for entertainment, 1978 was the year I discovered my style icon.

Little did I know at the tender age of 8, a certain song that catapulted to the top of the Australian charts, would lead me to a band with a fabulous lead singer.

Every night for a week the top 40 would play and every night we heard “Heart of Glass”. I was desperate to go home and watch “Countdown” to get a glimpse of “Blondie”. And, I wasn’t disappointed! There they were in all their new wave glory.

The clip starts off with an aerial view of the World Trade Centre at night, then zooms in on a NY city streetscape.

Enter the classic disco, mirror ball spinning, the boys in cool black and white vertical striped T-shirts, jeans and sneakers, and Debbie, in an asymmetrical dress, accessorised with a chiffon scarf, designed by a then unknown Stephen Sprouse (I would hazard agues he did the tee’s too)!

That was it, the seed was sown and the dye was cast, blonde that is!

Her influence on me at a young age would be such, that I took a picture of her to the hairdresser, cut a fringe and a shoulder length bob.

I didn’t have those killer cheekbones, but who worries about that when they are 10?

Then I wore a yellow t-shirt, black sunglasses and a garbage bag to a dress up party just like Debbie in the clip for “Atomic”. I suppose I could have gone as a princess, but as far as I was concerned this was the look for me!

Deborah Ann Harry was born in 1945 in Miami Florida, and was adopted by Richard and Catherine Harry when she was 3 months old. 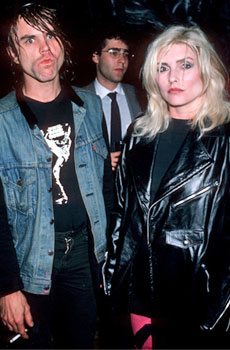 They moved to Hawthorne, New Jersey where she attended high school and college before moving to New York City in the late sixties.

Harry did many jobs including a stint as a Playboy Bunny and a waitress at Max’s Kansas City.

She sang back up’s for a folk group “Wind in the Willows” before joining the “Stiletto’s”. It was in this band that she would meet her collaborator, lover and best friend Chris Stein.

They quit “The Stiletto’s” and went on to form “Blondie”.

Punk was the new kid on the block, and CBGB’s was the place to play.

It was the mid ’70’s and they shared the stage with the likes of “The Ramones”, “Talking Heads” and Patti Smith.

Blondie was never really punk, more new wave, and over there 30 plus year career they have covered many musical genres. “The Tide is High” has a strong reggae beat and “Rapture” from the 1980 album “Autoamerican” can, arguably be credited as the first rap single by a non black artist. 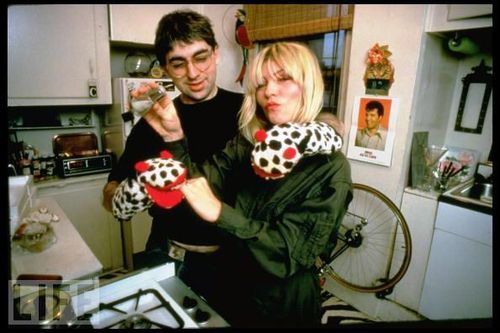 Today Debbie Harry has a strong interest in jazz, with one of her side projects being “The Jazz Passengers”.

Harry has also starred in many films and television shows, including Union City (1980) and John Waters Hairspray (1988), not to mention all the video clips over the years.

Throughout her career, she has always had a strong sense of style and kept control of her image.

She met designer Stephen Sprouse, living in the same building on the Bowery, where she and Christopher Stein were cohabiting at the time.

I’m not sure if this was the apartment that had the zebra striped floor. Yes true story, I met Debbie and Chris while on tour in Australia in 1999 and asked if it were fact. Chris was pretty impressed with my trivia and confirmed it. In the year 2000, Marc Jacobs invited Sprouse to design a range of bags and accessories for fashion house Louis Vuitton.

His range of graffittied bags were an instant hit. Once again Harry was there to support her friend.

From the cover of the 1978 breakthrough album “Parallel Lines”, to her boob tube and shorts ensemble in the clip for Rapture, and all the way with garbage bag couture, Deborah Harry has proven she can wear practically anything, at any time.

Oh and it never hurts to possess razor sharp bone structure, a fabulous figure and an attitude to match.

Even today, at 68 she looks amazing.

Still marching to her own beat and influencing almost every wannabe pop princess, proving the original is still the best!