Deborah, Duchess of Devonshire, photographed by Cecil Beaton in 1950

The last and youngest of the famous six Mitford ladies of the 1930’s and 40’s in London, renowned for their scandalous promiscuity and political affiliations, Deborah Vivien Cavendish, Duchess of Devonshire DCVO (née Deborah Freeman-Mitford) of Chatsworth, born in 1920 departed this life on September 24, 2014.

Appointed a Dame Commander of the Royal Victorian Order (DCVO) by Queen Elizabeth II, for her service to the Royal Collection Trust in 1999, Her Grace, The Dowager Duchess of Devonshire lived a grand and generous life, leaving us aged 94 a decade after her husband Andrew. 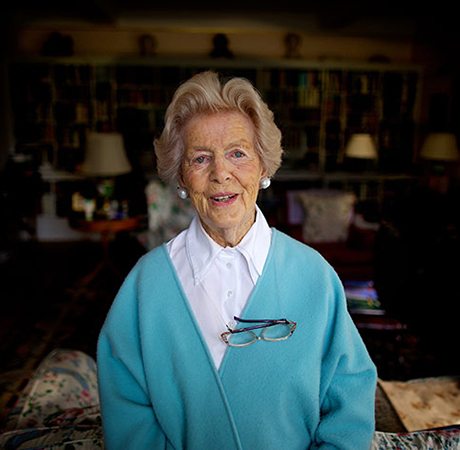 She left behind a considerable legacy of style and a fine example of commercial trendsetting, most especially in the world of tourism where her ability to develop profit making activities became legendary.

This included pioneering retail and catering operations such as Chatsworth Food and Chatsworth Design where she chose and reproduced wares from the house’s collection for sale in the shop.

It was around 1688 when some of the grandest architectural gestures in England occurred.

This included Chatsworth, the country palace wholly detached in plan and style from current practice.

The 4th Earl and 1st Duke William Cavendish of Chatsworth was one of the leading promoters of the glorious English Revolution that brought the welcome Dutch rulers William and Mary to the throne of England in 1688.

It was quite a year.

Standing silently and set stunningly against a small hillside in Derbyshire, today Chatsworth is without doubt, one of England’s greatest treasure houses. Chatsworth House the west front set against the hillside with a flock of sheep in the foreground, a rural scene of great style

Perhaps it is closest to England’s architect extraordinaire Inigo Jones (1573-1652) amazing interpretation of classicism for the delightful Queen’s House at Greenwich, but on a much grander scale.

Chatsworth’s construction heralded the beginning of a new age in England for that of increasingly interpreting the architectural elements of both ancient Greece and Rome and its continuing themes of liberty, religion and justice.

First encountering the Duchess accidentally in the corridor of her wonderful country house Chatsworth in Devonshire was a memorable moment for me, because I admired her championing the house she so loved and fighting so hard to keep it for posterity. Our first meeting came about as I almost accidentally stood on her toes as she unexpectedly exited one of the numerous doors along a quiet corridor where I was perusing some of the family’s splendid paintings.

Begging her pardon, she reassured me by grabbing my arm and offering me her hand, engaging in a delightfully animated conversation that lasted a number of minutes. We parted laughingly.

It was during the early 80’s, and at the time she used to happily roam about the house’s numerous halls among the hundreds of admirers who took over her home each year on open visitations.

She remained in the main often unobserved, dressed simply a basket of flowers over her arm with well worn secateurs at the ready to fashion an arrangement of seasonal flowers picked fresh from the garden. At other times you could find her selling tickets at the office. In her sitting room, and as I remember her

It was years later when I was once again privileged to meet her, only this time I was invited to take tea, a special event arranged by a mutual friend.

What immediately struck me at both encounters was her warmth, her wonderful ability to put you instantly at ease and to make you feel at home.

She beautifully bridged the gap that often seemed to occur between those hovering on the edge of a traditional divide; the one that kept upstairs people apart from those downstairs for centuries.

She was not at all pretentious in any way, enjoying a good story and a great laugh and importantly, never at anyone else’s expense. An impressive backdrop by anyone’s standards

Her ability to make you feel relaxed in her great historical treasure house was unique and my admiration for her only grew over the years, as reports about her successes in increasing tourism numbers at Chatsworth, were released.

She seemed to me to be generous to a fault and an admirably strong business woman.

A true master of clear, concise and honest communication, as well as a marvelous mistress of many hearts.

My wonderful encounters at Chatsworth, has meant that it has always remained one of my all-time favourite places to visit in England.

However its collections are a huge drawcard, breathtaking, especially the textiles which I love and all the decorative arts that abound.

She championed the important historicity of this wonderful place and it was one she instinctively understood, respected and worked hard to preserve.

It is and remains a supreme symbol of all a home means to each and every one us, whether it is built on a humble or grand scale.

The suites of lovely rooms that formed part of a rich enfilade her husband’s ancestors had once most formerly paraded along in true aristocratic style, were superbly designed and fitted out. Photographed in a historic dress by the Edwardian fashion designer Worth, aged 80

While many might consider her a grand Duchess, she was certainly a woman who would have been equally at home having tea in a cottage parlour, as in her own comfortable chintz filled morning room at Chatsworth,

My first visit to this lovely house had been in 1972 when the Duchess was, like so many other nobleman’s wives, busy managing the arrangements to open their houses to the public and I have been back many times since. Duke and Duchess of Devonshire

Opening the houses and gardens to the public was a necessary endeavour if the families wanted to maintain them well.

The aftermath and results of two major World Wars in such a relatively short time during the 20th century in England and Europe, brought about the demise of so many former grand estates, which were sold off or used for redevelopment.

Chatsworth,, superbly sited in a lovely valley, managed to survive and thrive due to her loving care and skilled entrepreneurship. My personal favourite is the seventeenth century suite of rooms where the monarch would have been accommodated on a royal visit and where undoubtedly men dressed as peacocks and paraded around in style. During the latter part of the seventeenth century an increasing variety of textiles were coming into use for wall hangings and upholstery however nearly all big houses with any pretension to fashion still had one room hung with superbly rendered leather hangings that had been punched, painted and gilded gloriously.

Recently restored, the music room’s splendid leather hangings once more offer visitors an opportunity to understand and appreciate the art of skilled hand craftsmanship of the stunning array of furnishing trades prevalent at the time.

They quite take your breath away, as do some of the house’s best examples of furniture by Louis XIV’s favourite furniture designer Andre Charles Boulle, superbly inlaid with brass and tortoiseshell.

As well there are some quite wonderful paintings including a personal favourite of the delightful Magdalena, one of the two daughters of the talented Flemish painter Cornelis de Vos (1584-1651).

The music room contains a rare surviving harpsichord, while the most popular of its treasures is a most extraordinary example of trompe l’oeil, a painted violin hanging on the back of a door, which does indeed, trick the eye.

The violin is part of a legacy of style and influence that in the second half of the seventeenth century transformed the standard and practices of the orchestra. It would certainly be appropriate to play in this setting. 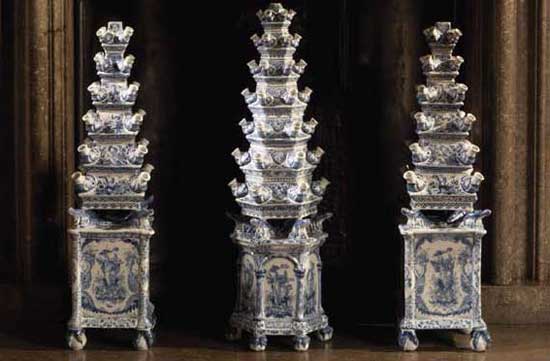 Commissioned from painter Jan van der Vaardt (c. 1653-1727) for the family’s house in town, Devonshire House at Piccadilly, as we gaze at a close up it is possible to imagine a joyous French air.

Chatsworth, also has on display treasures by wood carver Grinling Gibbons (1648=1721) in particular a carved cravat, whose delicate detail of lacework modelled in timber, is quite breathtaking.

The sterling silver chandelier, which knocks your socks off, arrived in 1694 and hangs gloriously in the Closet a private, intimate space next to the main bedchamber in which the monarch would work and relax with friends when visiting.

At the time ceramicists were unable to produce true porcelain, like the fine examples now arriving in droves from China and of which Chatsworth has a fine collection.

This went on until well into the eighteenth century when tin glazed earthenware provided English and European states with a means of producing their own ceramics and also using local motifs from cultural sources as an expression of national pride.

The pyramidal form of these highly desirable Delft tulip vases is symbolic of the hierarchy attached to the contemporary society of the time. With the desire to make the spaces at Chatsworth, easier for visitors to interpret characteristic of the duty of care felt by Duchess of Devonshire, this house and its garden should be at the top of every list to visit by those planning a trip to England.

Like any mother she would say the greatest accomplishment of her life would be her children and there is no doubt that they had a superb role model for how to live a life that benefited so many others.

From her Dower House nearby she has no doubt guided her son since he took over the reins when his father died in 2004.

Every day in preparation for opening the house to the public, hundreds of the local country people have been employed on the estate, which is entirely due to her great diligence, vision and care over half a century.

Today under her son’s watchful eye Chatsworth, continues to evolve. The achievements of previous generations and his mother provide sure foundations on which his and the next generation will build, both honouring the truly grand Duchess, while admiring her legacy. Vale Dame Deborah, you were truly an inspirational and accomplished woman of influence.

In Tuscany, Italy the river Arno provides its life’s blood; a miracle of man’s achievement and survival in a world constantly assailed with change; one that has battled to survive as an inland town among the rugged Tuscan hills, no bigger than a provincial town today, dependent upon imported food…