The image of a previously ‘un-identified’ sitter, in 1st French Empire style costume, showing off a gold finger band and superb pearl earrings, seated on a green silk velvet bench.

She is one of the great works of art in the celebrated David Roche Foundation of English Regency and French Empire decorative arts at Adelaide in South Australia.

It was part of a 2008 Exhibition – Empires and Splendour, which was held at the Art Gallery of South Australia.

The portrait, an oil on canvas signed lower left R Lefévre Fecit was also displayed in the first exhibition of this amazing private collection to be held at the David Roche Gallery in Adelaide post Easter 2012.

It has been suggested, by some in the know the sitter is Bernardine Eugénie Désirée Clary (1777 – 1860) former fiancée of Napoleon Bonaparte, and later Queen Consort of Sweden and Norway?

If it does turn out to be proved to be Désirée, it will be yet another coup for this renowned Australian collector David Roche, whose amazing ‘cabinet of curiosities’ will be bequeathed to the people of South Australia.

Preliminary examination and knowledge that both portraits reveal a small blemish or beauty spot to the left hand side of her nose, is surely an intriguing co-incidence. 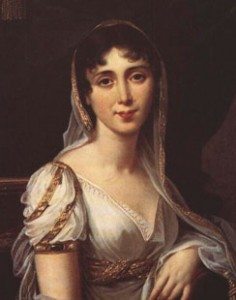 Désirée Clary, later Queen of Sweden, by Robert Lefévre. This portrait is at Drottingholm

This image is a side on view, as opposed to the full frontal view of the work by Lefévre below, which is now in the Royal Domain at Drottingholm.

Those familiar with the story of Désirée may also recognize her inimitable hairstyle.

Neoclassicism was the culture of an age when educated and enlightened men and women deliberately set out to rediscover classical art and architecture.

Why certain countries at certain times should be centers of genius and influence remains a mystery.

But it is undeniable that the quality of French painting from the Revolution until 1930 is far superior to the work done elsewhere, through a series of masters like Jacques Louis David (1748-1825).

Historically a portrait is the representation of an identifiable individual. Robert Jacques François Faust Lefèvre (1755 – 1830) was a French painter of portraits, history paintings and religious paintings.

He was also heavily influenced by Jacques-Louis David, who became Court Painter to Emperor Napoleon 1 (1769-1821)

He is well known for his delightful portrait of Désirée Clary, who in 1795 was presented to General Napoleon Bonaparte, to whom she became engaged on April 21st of that year. Marie Julie Bonaparte (née Clary), Queen Consort, of Naples and Sicily, Queen Consort of Spain and the Indies (26 December 1771, Marseille – 7 April 1845, Florence) was the wife of King Joseph Bonaparte of Naples from January 1806 to June 1808, and Sicily, later Spain and the Spanish West Indies from 25 June 1808 to June 1813 painted by Robert Lefevre

However when Napoleon became involved with the widow ‘Joséphine’ de Beauharnais, whom he eventually married on March 9 1796, Napoleon broke off his engagement with Désirée.

She fits well into the romantic genre, as the world she knew moved from an era of revolution, to that of the romantics.

She was a merchant’s daughter, who became Queen of Sweden.

Lefévre painted her as well, so perhaps she might be an outside contender for the mystery portrait, as the two sisters were quite alike.

Lefévre began his career as a self-taught painter and in 1784 entered the studio of Jean-Baptiste Regnault at Paris. After several years of allegoric and mythology subjects he switched to portraiture, where he had considerable success.

Thanks to the sponsorship of French artist, writer, diplomat, author, and archaeologist Dominique-Vivant Denon, Lefévre was appointed Director General of Museums in 1802.

He obtained numerous commissions from Napoleon Bonaparte and after the Emperor had been deposed, his career continued with Louis XVIII of France, to whom Lefévre became Court Painter. The Bernadotte family; Désirée, Jean Baptiste, Oscar their son, who was the godson of Napoleon, and his wife Josephine of Leuchtenberg, who was the grandaughter of France’s Empress Josephine. 1837 The Bernadotte Family by Fredrik Westin (Gripsholm Palace, Mariefred Sweden)

In late 1797 early 1798, Désirée Clary returned from Rome to France where she met her future husband, Jean Baptiste Jules Bernadotte [1763-1844]; a leading general in the French Napoleonic army.

Désirée enjoyed a good relationship with the Bonaparte Imperial family, as well as with Empress Joséphine, and declined taking sides in conflicts between Joséphine and the Bonaparte siblings.

Désirée was also given a place at the Imperial Coronation Ceremony of Napoleon and Josephine held in France in 1804. It was in 1810 that General Bernadotte was elected heir to the throne of Sweden, at which time Désirée visited Sweden for the first time. Bernadotte became King of Sweden in 1818 and Désirée was crowned, at her own request, on August 21st 1829.

Désirée – Is This a Portrait of Napoleon’s First Fiancée?

With thanks: David Roche Foundation Collection Adelaide and curator
Viewing Gallery: 237 Melbourne Street, North Adelaide SA 5006
Friday to Monday: Closed – Tuesday to Thursday: 10am to 3pm
Entry by donation of $2 per person

ABOUT DAVID ROCHE
David Roche, whose father established the successful Adelaide Development Company in 1922, was born to be a collector. As a child, he benefited from the finest education and regular trips to Europe, where the family would enjoy private tours of the great art museums.

He began purchasing antiques as a teenager and has continued to refine and add to his excellent collection ever since, with the advice of experts including Sydney antiques dealer and Mr Roche’s principal collection consultant, Martyn Cook. In 1999, Roche established the David Roche Foundation to maintain and preserve his collection, which he has bequeathed to the people of South Australia. He has been a lender and donor to the Art Gallery of South Australia, and to the Powerhouse Museum, Sydney.

David Roche passed on in 2012, leaving his collection and house museum estate to the nation. It is managed and the collection displayed by the David Roche Foundation