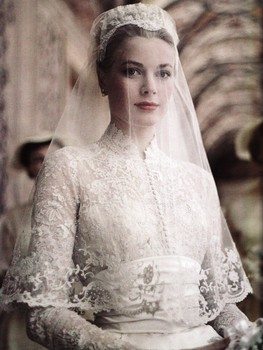 With it being HRH Queen Elizabeth II diamond jubilee, I thought it was only fitting to talk about the ultimate royal gown, the regal wedding dress. A dress to be married in is arguably one of the most important choices in a womans “fashion” life.

Imagine then the eyes of the world are upon you, ready to critique every seam, pleat and pin tuck, your choice of silk, satin and lace.

There have been a few misses over the years, but in general, the royal women have nailed their looks in a style relevant to their age.

Whether you are a monarchist or republican, I think a wedding transcends politics. It is a joyous time (except perhaps for Princess Charlene of Monaco) that warms the soul.

Here are my top 10 picks for the most glamorous gowns of Princesses, Queens and commoners.

10: Princess Letizia married Felipe, Prince of Asturias, on the 22nd of May 2004. She is the first of our commoners to rate a mention.

Previously a divorced journalist, her first union was a civil ceremony, because the Roman Catholic church did not consider their marriage in the church valid. 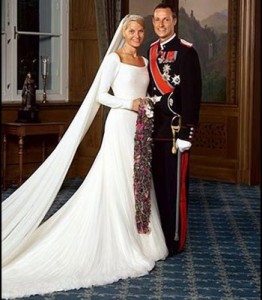 The dress, made by Ove Harder Finseth and seamstress Anna Bratland features\d a six metre long silk veil and was made of thick silk crepe and soft silk tulle.

Love her or loathe her, she was a woman with impeccable taste in clothes and jewels.

The Duchess chose to wear a Mainbocher creation for her third marriage on June 3rd 1937.

The gown, made from sapphire blue silk, now resides at the Metropolitan Museum of Art (The Met) in New York City.

The colour “Wallis Blue” was so named by the designer, as it perfectly matched her eyes. 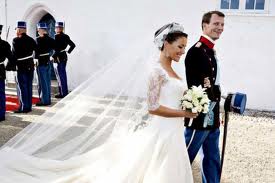 7: Marie Cavallier, this gorgeous Parisian married Prince Joachim of Denmark on 24th May 2008.

Dressed in an Arasa Morelli design, off white and lined with ivory silk faille from the silk maker, Buche in the Loire valley, this was a delicate and stylish choice. 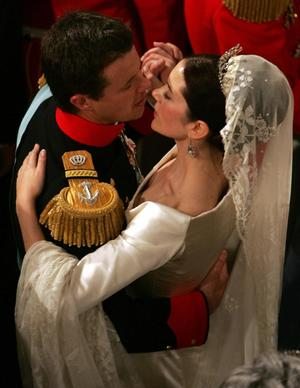 Rose, who had been costume designer for MGM, had worked with the Princess on her movies “The Swan” and “High Society”. She included tiny blue satin bows on the petticoats as a touch of blue, which is an old tradition that symbolizes love, modesty and fidelity

Our Mary as we Australians like to refer to her, met her Prince at CBD Hotel in the heart of Sydney.

He fell for her and so did the rest of the world.

She showed us that she was truly all class and made us proud. I think their romance made us feel in a modern, crazy world fairy tales can come true.

Oh, and I just LOVED that earring/tiara combo!

In a Norman Hartnell gown, she looked stunning but sombre.

The dress, made from silk organza was described by Vogue as “stunningly tailored”.

It was widely known that her true love was Group Captain Peter Townsend, her fathers equerry.

He was divorced and their union was not to be.

I imagine that this was a bittersweet day for the Princess. And, I think you can see a sadness in her eyes.

Who could forget the twenty five foot train emerging from that car on July 29th 1981.

Quintessentially 80’s, this dress summed up an era of excess and shoulder pads.

The royal watchers were desperate for Prince Charles, heir to the throne, to marry. Nineteen and naive, Lady Diana Spencer was a perfect choice.

The world fell in love with a shy young kindergarten teacher and watched her blossom into a clever woman, championing causes close to her heart. 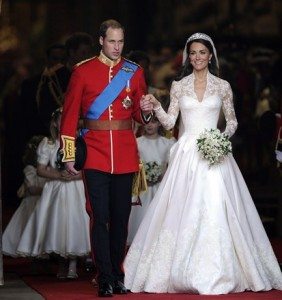 2: Catherine Middleton is probably the most famous commoner to yet marry into British royalty.

After presenting her with his mothers 12 carat oval sapphire engagement ring, we all waited with baited breath to see which designer would score the ultimate gig, creating a potential future Queen of England’s wedding gown.

Prince William has great taste in women, and it seems ‘Kate’ has even better taste in clothes.

Her choice of Sarah Burton for Alexander McQueen was more than perfect. 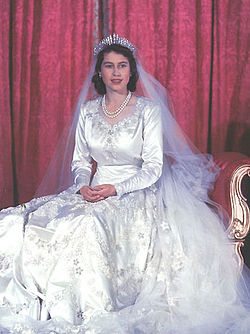 Let’s not even mention Pippa!

I would like to give Her Majesty top billing as it is her year!

Being post war, she saved ration cards to purchase the materials needed.

Elizabeth shone in a Norman Hartnell satin gown decorated with crystals and 10,000 seed pearls.  The material for it was woven at Winterthur Silks Limited, Dunfermline, in the Canmore factory, using silk that had come from Chinese silkworms at Lullingstone Castle.

The star pattern seen on the dress was chosen to symbolize rebirth and growth after WWII.

Prince Elizabeth’s wedding ring was made from a nugget of Welsh gold, which came from the Clogau St David’s mine near Dolgellau.

The official wedding cake was made by McVitie and Price Ltd, using ingredients given as a wedding gift by Australian Girl Guides. McVitie have also recently made a cake for the Diamond Jubilee Celebration.

The wedding was the first, and so far the only time in British history, that the heir presumptive to the throne had been married.

This would not be HRH Queen Elizabeth II’s last time centre stage, in fact as we now know, it was only the beginning of her sixty amazing years as the ‘Diamond Queen’. Every woman should feel like a princess on her wedding day, I certainly did!